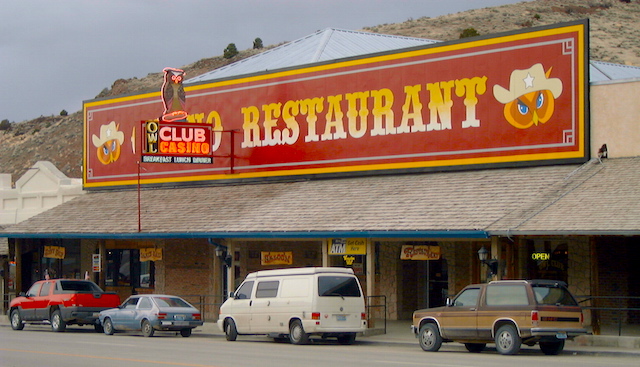 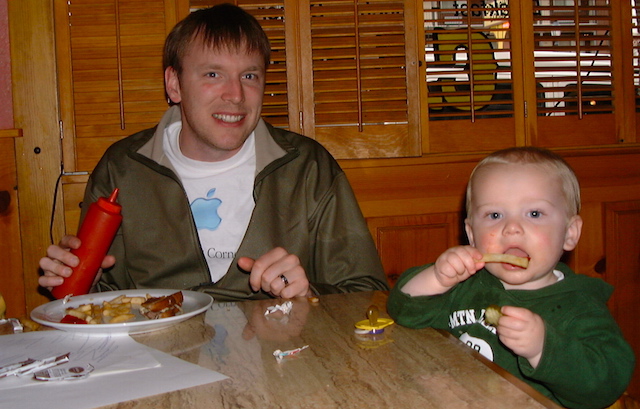 “Well, there were sure a lot of people sitting there at the bar at 3:30 in the afternoon,”Dave says as we drive out of this middle of nowhere, middle of Nevada town. “Home of the Vandals,” he remarks as Coldplay’s “The Scientist” plays in the background (accompanied by Eli’s cries).

“You don’t have a tethered pacifier?”

“What”  Dave asks and I pause and take a deep breath, “a remote little town.” Dave continues,

“Think about how far Eureka is from anywhere. At least there is a road going through it. Though it has been a long time since anyone has used Route 50 as their main way of getting across Nevada.” I say.

Eli’s cries have thankfully turned to bursts of laughter. Kyle is hooked up to our traveling DVD player watching his scary Dinosaur movie, “Land Before Time IX: Journey to Big Water.” 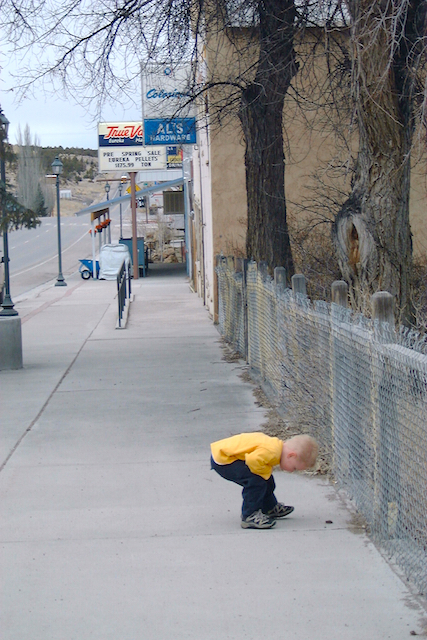 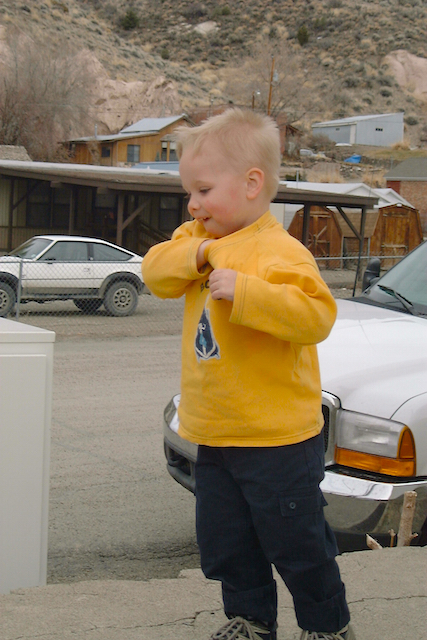 We are headed eastward.

It was several years ago when I last drove through these dust-filled parts. I was invited for Thanksgiving to a college friend’s home in Yerrington, NV, a sleepy town much like Eureka. At the time I arrived in Yerrington they were just installing the town’s first stop light, a much needed and talked about improvement. Like Eureka, the locals were hanging out at the bar in mid-afternoon, smoking their cigarettes, playing the slots, and sipping their drinks with the big screen TV playing sports and news in the background.

We drove up to my friend’s parents’ home (a half complete trailer park trailer), which was plunked down amidst a scrubby dirt patch. I walked into the door of their half-completed home as I saw my friend’s father sitting in the bare, unfinished room, cigarette in mouth, watching the only item in the room, the television.

There was no response. As my vision blurred and my sweat glands overloaded I thought to myself,

“What the hell am I doing here?”

I was eighteen. I had just moved from lush, populated Minneapolis to go to college in the west, and now I was in the middle of nowhere; nowhere in a cold, smoke-filled, and partially complete trailer home.

“Dad, are you going to answer me? This is my friend Beth.”
With that, he briefly turned his greasy head towards me and said, “Hi.”

Then she gave me a tour of her home. When we reached the bedroom where I would be sleeping, I said,

“Do you mind if I take a nap? After all that driving I am exhausted.”

I could see that my request gave her relief, because I could see that she was embarrassed about her surroundings. Mostly, I realized that in my inconsiderate haste and worn-on-my-face panic I had made her feel that way.

See when I was eighteen, I really felt like I not only came from the right place (Minneapolis, Minnesota), but because I came from a city that somehow I was more sophisticated or enlightened (not true). Now I realize that my projected “sophisticating” was simply disguising my needs-medication-styled homesickness and separation anxiety.

I had not been napping long when my friend and her Mom came running to my room. Because I was asleep I did not realize I was screaming,

I know. Not only was I wearing my uncomfortable feelings on my face, I was screaming them in my sleep.

The rest of my Yerington, Nevada weekend is a blur. I do remember that my friend took me with some of our other friends to the local bar. At the bar, my friend’s boyfriend gave me a roll of nickels for the slots, which I burned through in about ten minutes. My friend and I also the trip to the big city of Fallon, Nevada to see a movie at the local sticky shoe movie theater. I loved it. And then there was the car accident we saw as we drove back to Utah on Interstate 80. A man driving a big old truck had gone over the embankment. When we drove by we saw smoke and then his truck over the edge. We pulled over and hiked down to see if he was ok. Remember none of us had cellphones. We had to go old school and stand at the edge of the interstate in an attempt to wave an oncoming vehicle down. We waved down a semi. He pulled over. We told him about the accident, and he immediately radioed for help.

The man, who was thrown from his truck, was disoriented (of course), and was bleeding heavily. As I watched the blood gush from his head, all I could think about were the brand new bath towels. My mom new I needed new towels and had just bought them for me. I never had such nice towels and cherished them so much I brought them along. They were packed away and sitting in my friend’s car. At that, I took a deep breath, hiked back to my friend’s car and got the towels. I put the towels in my arms and walked them back down the steep embankment. I handed them to the man. And someone (I can’t remember now) wrapped them around his bloody head. The ambulance arrived. I don’t know his name. I don’t know if he lived or died. I do not know what happened to my towels. We just drove a way.

Today on Highway 50 I drive across all those memories. I see the white crosses and flowers of roadside memorials zipping by. I wonder if there is one for the man. Then we stop in dusty, lonely Eureka. I am reminded of that Thanksgiving. This time I am with my husband and sons. This time Kyle and I take a walk and pick up pinecones. This time we laugh at the fun we are having. This time I am a mom, and this time I do not scream. 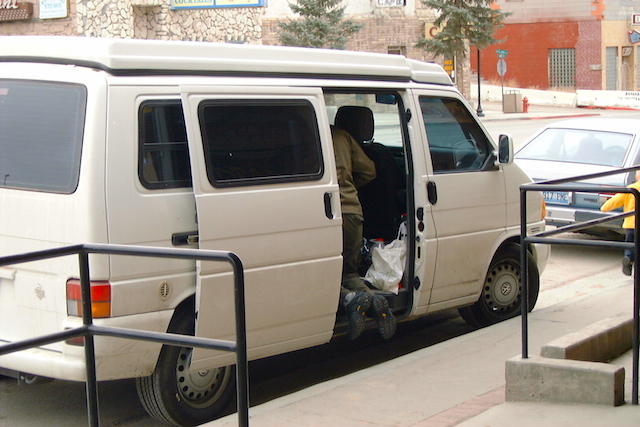