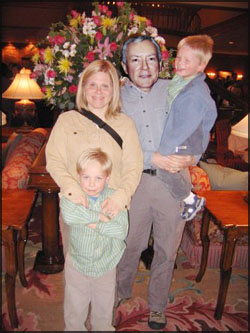 Posing with Senator, Orrin Hatch: What should have been [wink wink]

I’ll start with where it ended: New Year’s Eve day began like any other Saturday. We were all exhausted after a very long week, the kids were screaming for breakfast, and Dave and I were trying to sneak in a few extra zzz’s by convincing the kids that because they had been playing so well, they could watch one television show if they sat very quietly on the floor at the foot of our bed. The day before my friend Kat had called to see if we had any plans for New Years and seeing as how we had literally canceled our trip to Las Vegas about five minutes before she called, I told her that our calendar was completely open. There Dave and I lay with sound and light blockers over our heads (blankets), trying to muster the strength to get our butts out of bed and make this New Year’s Eve a great day for all (remember, my sister, her husband and daughter were here for the holidays).

I wasn’t very worried about making the day great. It already would be, because we were just happy to be surrounded by family and good friends. I imagined a low-key night playing games and taking silly pictures (which I did) when somewhere, sometime, somehow during the day, some crazy soul (probably me) got the cockamamie idea to take the kids down to First Night, Salt Lake City’s New Years Eve Festival, where streets are blocked off, music is played LOUDLY, food is sold, and there are tons of festival-type things to do. (One of my favorites: Joining the Pow-Wow, and dancing to the drums with Zeke and Eli.)

(A Happy Hint: If you already happen to be skimming what is sure to be a very long story, stop now and please pay attention. This next little interaction is very important to how the rest of our evening will play out.) — Around 4:41 PM, or something close to 4:41 PM, my friend Alan (Kat’s husband) called to say that they were getting antsy and were ready to hit the festival. I told him that Dave, who had been skiing with my sister and her family, had just called and they would be home momentarily and that Alan, Kat and Zeke should head on over to our house.

Almost an hour later all seven of us were completely dressed and ready to go. Dave was freaking out because we were going to miss the Childrens Activities so I recommended he call Kat and Alan to see where they were. He called their house, no one answered so we both assumed they were on their way. Kat called about fifteen minutes later right after Dave had nearly burst the big vein that moves across his forward only to show its presence when Dave is really angry.

“Hey, Zeke and I are downtown. We just dropped Alan off at the basketball game. Where do you want to meet up?”

“Huh? [my eyes are now twirling all over the place — long pause] I talked to Alan and he said you guys were on your way over and that was an hour ago!”

I could immediately sense how bad Kat felt. Kat is literally one of the nicest, kindest, most honest and sincere people I have ever met. I felt bad because I knew I was bumming her out with this news. We most certainly had a mix-up. After Dave blew a gasket, we figured things out. We were going to meet Kat and Zeke downtown and Alan would meet up with us later. The truth is at the very last minute one of Alan’s friends called him with first row center court tickets to the Jazz game. I am guessing he had such a mangasm at this most exciting news that he got his wires crossed.

We found Kat and Zeke and eventually met up with Dominique (my sister) during the stellar performance of The School of Rock. The School of Rock kids covered Pink Floyd for their first set as our kids danced and spun around in that open space in front of the stage. It was all rosy until Eli, weighing in at 40 plus pounds, decided to spin Zeke, weighing in at about twenty-two pounds, around by the arm. What Eli hadn’t bargained for was that he chose to spin Zeke on his Bad Arm, you know, the arm that has the elbow with the little dislocation issue. Zeke and his arm, which now appeared to bend in three spots, walked over to Kat and me, and I immediately knew it was bad. Thankfully, this has happened before, and thankfully, Alan (who was just across the street at the game) knew how to snap Zeke’s elbow back into place. Woohoo! Kat no sooner rushed Zeke out of the building when Kyle and Eli ran head-on into each other (hence the tears in the picture). Once my niece Chloe saw the boys crying, her sympathy got the best of her and she broke down as the band sang,

When I was a child I caught a fleeting glimpse,
Out of the corner of my eye.
I turned to look but it was gone.
I cannot put my finger on it now.
The child is grown, the dream is gone.
I have become comfortably numb.

Dave and I joined in, holding up our invisible lighters. And no, (as every single person with in earshot or who could see us could attest) we, ourselves, were absolutely in no way at that moment, comfortably numb.

We made our way through the disco lights, purple, gold and green shining streamers back to Kat and Zeke. Zeke’s arm was back in place and he was back to his happy self. Surrounded by several hundred loud festival goers, we decided it was the right time to leave and that we should meet up with Alan for some dinner.

We made our way to the front entrance of The Salt Palace and as we stepped outside, it began to rain ever so lightly. As we stood there trying to decide where to eat, the rain came down harder. We decided to run for our cars. Kat and Zeke came with us so we could give them a ride to their car which was much farther away. Dave and the boys took off as Kat and I (and I swear it was in super-slow motion) ran through the now-sheets of heavy rain. In the background a band, who was still managing to perform in the torrential downpour, was playing a little Al Green and I swear one more time that Kat, Zeke and I were transported into some sort of Quentin Tarantino movie.

I’m, I’m so in love with you
Whatever you want to do
Is alright with me
‘Cause you make me feel, so brand new
And I want to spend my life with you

Me sayin’ since, baby, since we’ve been together
Ooo, loving you forever
Is what I need
Let me, be the one you come running to
I’ll never be untrue
Ooo baby . . .

As Kat pleaded with Zeke not to look straight up into the pounding rain, the music kept on playing.

Let’s, let’s stay together
Loving you whether, whether
Times are good or bad, happy or sad . . . 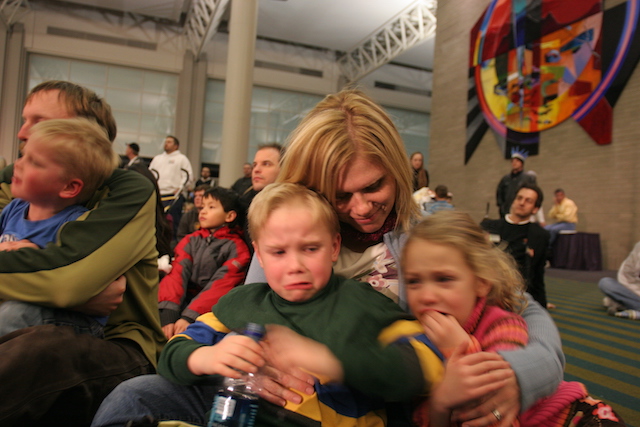 “Orrin Hatch is giving Alan a ride to your car?”

At Kat’s car, and because Alan wasn’t there, I teasingly suggested that Orrin give Alan a ride to the taco joint we were going to. At that moment, Kat’s phone rang. Still laughing she told Alan that I recommended that Orrin drop Alan off at the Taco place. And you know what? Orrin told Alan that it was a good idea (or something like that). And so moments from now, Orrin would be dropping Alan off.

As we drove up 4th South, I laughed and I schemed with Dave, who was also laughing.

“He can ask Orrin to take a picture with me! Wouldn’t that be hilarious?”

Before Dave could respond, I dialed my sister, who was already at the taco shop, and asked her to have her camera ready. We pulled into the restaurant. My sister hopped out of her car. I hopped out of ours. A ginormous SUV pulled up behind us and out hopped Alan, who immediately walked over to apologize. He gave me a hug and before I could ask him what I wanted, Orrin’s driver sped away, damn it!

“Alan, I wanted a picture with Orrin.”

“Beth, oh man. He totally would have done it. You should have called.”

Yes I should have. That one moment in my life when I should have called, I erred on the side of not being pushy. Oh man!

“Well, I have some good news for you anyway.”

“I did. I even made sure he knew the URL”

Whether he really did or not (he still claims he did. He even told me that he Blackberry’d Orrin’s aide to tell him what my traffic is), I’d like to think my friend Alan actually had a conversation with Orrin Hatch about his crazy Democrat friend. It doesn’t get better.

Alan, you are forgiven.

At that point we all collectively agreed what an amazingly strange night it had been: Dislocated Elbows, The School of Rock, The choreographed Rainstorm and Orrin Hatch at the Taco stand, it really doesn’t get weirded than this.

Oh yes it does.

So I am walking Eli into pre-school this morning when the director spots me. She follows me to Eli’s classroom.

“Hey, were you at First Night?” she asked.

“We saw you on the news, eating popcorn.”

Later in the day one of my neighbors said they saw Dave and I on another news channel. We were mouthing the words to Pink Floyd. 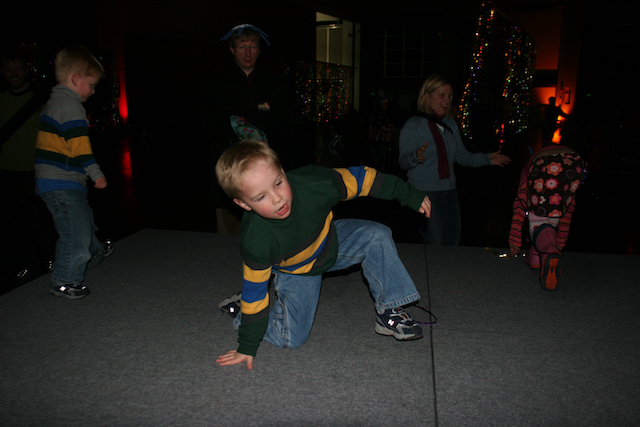 Happy New Year! By the way: (The news clip should post tomorrow and then I will link to it.)

And Senator Hatch, if you’re reading this, stop by sometime. I’d like to get that picture. (Dave added that last sentence. I think it is kind of cheesy, but I love Dave for adding it. — Moments ago, as I was saving this, we were awoken by Kyle, who was vomiting all over his bead. Poor guy. He thinks he is throwing up because he ate too many chips earlier tonight. Sadly, we think it may be the stomach flu.)