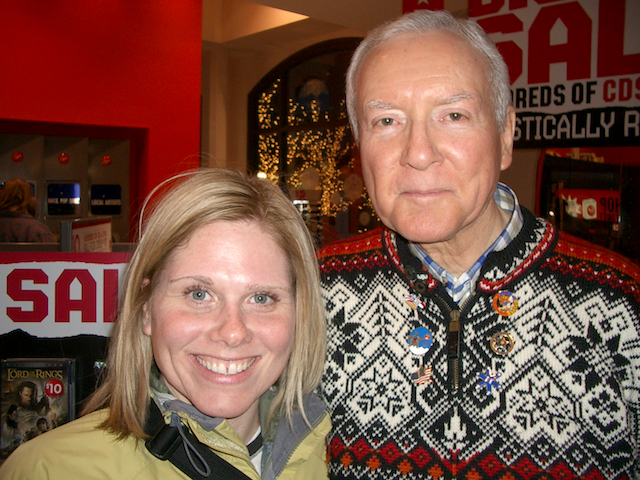 Me and Senator Orrin Hatch, Salt Lake City, Utah: Not at all politically aligned & we still managed a smile 😉

A few days ago, Saturday, I believe, my friend Jen (mother to one of Kyle’s classmates, not to be confused with the Jen I went to see Brokeback Mountain with Friday night) called me. She was at the Costco gas pump.

Jen: Beth, I had a feeling I should bring my camera this morning. I really did.

Jen: Do you know where I am right now?

Jen: I am at Costco pumping gas. And do you know who is pumping gas as we speak?

Jen: Orrin Hatch. I didn’t think Orrin Hatch would pump his own gas. I should have brought my camera. I really did have a feeling that I should bring my camera this morning. I thought it was weird, but now I know why. I have never seen a “celebrity” in person and especially not at the Costco gas pump.

Beth: It would have been hilarious if you had gone up to Orrin and asked to take a picture with him.

Jen: Are you kidding? That’s totally what I would have done . . . Oh well.

Beth: Hey, no worries. It makes a great story and an especially great image.

Now, you are probably wondering about my odd fixation with local celebrity or you are thinking I am a total nut job because I get joy out of spotting local celebrities.

I remember the last time I saw a local celebrity at Costco. I was giddy (okay, maybe giddy is a slight exaggeration). I had to stop, think, run and find Dave so I could bring him back to see the local anchorwoman for himself. The local anchor woman was buying toilet paper just like me. Can you believe that? Dave wasn’t all that impressed (but good thing for me, I can usually get him to play along). Hey, it was kind of like when Eli saw his own pre-school teacher at Costco. She was literally one of his favorite people. When he saw her outside of the classroom, his reality was blown. Seeing her was so out of context, he freaked out a little and hid behind my legs. And that is exactly what I thought when I saw Michelle King, the local anchorwoman:

“You are supposed to be in my television set, not buying sueezeably soft Charmin Ultra.”

And good thing for me, my reality has been blown more than once. There was the time I saw Wolf Blitzer standing outside of the very same restaurant I was about to eat at in Bethesda, Maryland. And there was the time Robert Redford was literally brushed up against Dave at the Sundance Resort Owl Bar, or the time I realized that Elizabeth Smart was staring at my wild children at REI. The funniest moment for me is when I noticed Mark Hacking’s lawyer at a local outdoor mall. I was like,

He didn’t. I don’t think anyone but me would have know who this man was either. I have a freakish knack for remembering physical details.

Maybe it’s just the thrill of seeing a local celebrity out-of-context, up close and personal, and being face to face with someone else whose life is publicly (stress on publicly) more glamorous than my own stay-at-home-mom existence. Whatever it is, I think a night at the mall is much more memorable when you get your husband to take inconspicuous photos of Donny Osmond, you know what I mean? And I am positive that nothing makes the time pass faster at the gas pump than when Orrin Hatch is pumping gas too. If only Dave had been there, then he could have engaged Mr. Hatch in a witty political discussion. Ah, next time.

By the way, thank you everyone who has indulged my quirky, noticing-local-celebrities-fixation. Jen, you rock!

PS: I am still in the throes of re-design. I am slow, slow, slow.