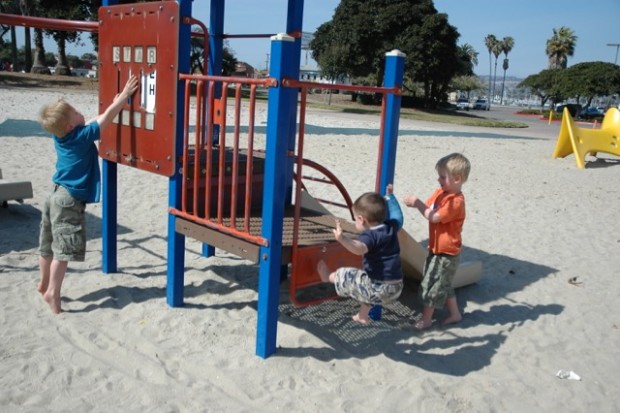 Like finishing/competing in an Olympic Decathlon (really, like deep cleaning your house), the Crazy Us site rebuild is almost ready. There were a few unexpected kinks in the road and once we had one thing fixed, another thing broke (became more disorganized).

Thank you for your patience. And NO, I haven’t quit Crazy Us.

In the meantime, here’s what’s been going on in our world:

1. Yesterday, on our way to breakfast, while pulling out of our driveway, I noticed that someone had smashed the back end of our other car in. Mind you, this is the second time since the holidays that a car has been smashed in on our block (with a hit and run). Last time, someone backed into the truck of Dave’s co-worker.

After taking hours to calm myself and calling the police, I composed a letter asking for help that I distributed to our neighbors. Lo and behold, we had one bite. On of our neighbors thinks that he possibly [wink, wink] backed into our car. We’ll see how that goes.

2. While Kyle was using the bathroom yesterday, he asked that no one touch the Lincoln Log Town he was building. The moment he left the room,our friend Alan covertly watched Eli instruct Zeke (Alan’s two and a half year old son) to do the following:

Eli: [pointing to Kyle’s Masterpiece] Zeke, touch Kyle’s thing.
Zeke: But Kyle said no to touch it.
Eli: Ah, you can touch it. Really, you can.

At that, Zeke took his index finger and carefully touched Kyle’s Lincoln Log town. And then Eli whispered into Zeke’s ear.

Alan came back into the room and laughing, told the rest of us what had happened.

Alan: Zeke was a pawn in Eli’s game.

A few seconds later, we heard crashing. We heard banging and then we heard screams. Eli came running into the room.

I carefully pulled Eli up onto my lap and asked him a few questions. I let him now that I had a secret spy in the room who heard everything. I also asked him if he remembered what my super power was. I reminded him that I can hear everything. He was a bit chagrined and we could all see that we had short circuited Eli’s attempt to manipulate both Kyle and Zeke.

I asked Eli to apologize to both Kyle and Zeke and to tell Zeke that he was sorry for using him as a pawn in his game. After Eli said those exact words to Zeke, Zeke lifted his arms up in the air and gleefully responded,