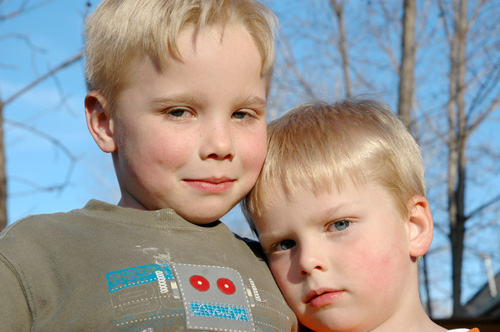 I LOVE these boys!

“Beth, you just don’t look like someone who would want another kid.”

To those people I want to say (but I don’t),

“Um, why don’t you think first before open your mouth.”

Thankfully, most folks, even if they don’t understand my crazy desires, are ultimately supportive. I want to thank all of those kind souls. Thank you! Thank you! Thank you! Your support has filled the holes where my self-doubt is forcefully trying to creep in. Just today, I was graphically describing to one of you the bloody mass of tissue I woke up to this morning. You empathetically told me,

“Beth, I think it was probably a miscarriage. Remember to be tender with yourself over the next few days, because your hormones will be all over the place.”

“Thank you for having my back.”

Whatever the bloody tissuey mass was, I am definitely not pregnant (AGAIN)!

Before you make a judgment of my mental state or make a judgment about what seems to be a very intense (perhaps a bit irrational) desire to get pregnant, I urge you to read on.

You see, in my journey to conceive, I think I have been forced once again to take a deep look into my soul. Truth be told, I have not always been pleased with everything I saw. Once I was actually ready to work through the layers of this issue (and because I am so damn stubborn, “once” took a long time to get to), I began to find some of the peace I have been looking for.

And if by chance, there is anyone out there, who has found themselves in a similar place, I hope my words can save you some precious time.

About a month or so, my life came to a head. My camera was broken (which totally paralyzed me). I decided to reconfigure my website, which didn’t go quite as smoothly and took much, much longer than I had planned. I was also coming off of the stream of houseguests, the holidays, the flu, birthdays and funerals. As my intuitive friend suggested,

“I think you have had enough going on to totally force your hand.”

I was finally forced to let go of the control and face the realities of my life. Fortuitously, a few months earlier, I think was being led to the place where my hand would ultimately be forced. One Sunday, Dave and I took our boys to church. While they were in their classes, Dave and I sat in the foyer. We started talking, which almost immediately escalated into yelling and screaming at one another, (Yes, we were screaming at each other at church, directly outside of the chapel). Dave abruptly walked out of the church and kept on walking to our car. I dramatically followed him into the car,

“Dave, You can’t just walk away from me.”

In the car, we screamed more freely about who knows what when he finally and wisely looked at me and asked,

“Is this about having a baby?”

“Will you feel better if we try?”

In that moment I literally saw something click in him and he finished with,

Let’s be honest, as much as I have wanted a baby, I have had a husband who was not completely sold on the idea. Sure, we have been technically trying to conceive for two years, but still, his heart wasn’t in it. And because his heart wasn’t in it, I was not fully committed either. Even so, I sought fertility treatment. I pondered adoption. I had Dave’s little swimmers tested and they are great. I freaked myself out and convinced myself if I did have another child that I would most certainly die or the child would be born with seventeen heads and sixty-three toes. I researched my options until I was completely overwhelmed and knew somewhere deep within me that I really couldn’t take our fertility to the next level without Dave. Until that moment when we sat in our car outside of the church, Dave and I had not been on the same page and we both knew it. As much as I wanted another baby, deeper in my heart, I knew that I didn’t want to trick my husband into having one. Psychologically I could not move forward until he was there with me. If we were going to have another child, I wanted our child to know that we both really wanted him or her.

Thank God, because in a split second something clicked and Dave lovingly jumped on board. With his encouragement, I felt confident to proceed. I bought more ovulation predictor kits. I spoke with my hormone doctor. I cut the caffeine even more. I talked with friends, who are also dealing with infertility (sadly there are a lot of us). And when I was ovulating (with my sister and her husband sleeping in the bedroom directly below my bedroom), I insisted that Dave and I have sex NOW.

“Beth, we heard you last night.”

As for having a baby, our hearts were really in it, but that wasn’t enough. Every month became this roller coaster of hope followed by ignoring the cramps followed by deep sorrow when my period came. Then, with Dave’s help and hugs, I would pull myself out of my sadness and start all over, convincing myself that this next month would be the month. I started back on Clomid (and didn’t even go crazy this time). I felt like a pro with my ability to identify the ovulary stages of my cervical mucous. And with my cervical mucous expertise, I made sure we had sex a few days before I thought I was going to ovulate all the way until a few days afterward. I continued researching and continued talking to my doctor.

Then last month, when my period came, I realized, I mean, I REALIZED, that it was going to take more than all my knowledge and our unified desire for me to get pregnant. For us to have a baby, I needed to push through the denial, stop tricking myself that having a baby will magically happen and actually commit to the task at hand. No more whining, because for us to have a baby, it is going to be a job.

If anyone had told me when I was twenty that I would be in a long holding pattern of secondary infertility, I could not have grasped what that really meant. I mean, really, at twenty, I was convinced that I would have all of my children by age thirty and I certainly would not have a five year (plus) age gap between my children. Somehow, before I had children, I thought that even if there was a glitch or two, I still could call the shots. Oh, the empathy, humility and compassion I have learned over and over and over and over again. The one quality I am still struggling with is patience: patience for myself and patience for others. When someone says something like how dumb it is to be forty or fifty when you have your first child, I am learning to bite my tongue and remind myself that they simply do not understand. Until they have walked in my shoes or someone with infertility’s shoes, they cannot grasp it, nor do they have to.

The patience for myself has been much harder to come by. I mean, come on, I am flawed. I can’t just get pregnant. My body is defective and my hormones are weird. I have scar tissue. One of my ovaries is quirky and all of these glitches add up. When I was at my OB yesterday, she even had another guess (and that is all it is, a guess) as to what may be causing my infertility,

“Maybe your body is attacking the sperm. You have such bad allergies and a huge inflammation response to allergens, maybe your allergies have transferred to your fertility.”

It sounded so hokey, but then I remembered my friend’s wife, who has exactly that problem. Her body attacks the fetus as if it were an allergen. She has to take high doses of prednisone to keep her babies to term.

Next week I go for a uterine dye test, which will probably be followed by a laparoscopy. Of course, Dave and I will still be trying to get pregnant the old fashioned way [wink wink and bring on Coldplay’s song, Fix You and I promise you that there will be sparks]. Aside from the consistent having of the old-fashioned sex, I have learned that I need to be assertive, confident, informed and at peace with my life. It has taken me a while to get here. At this moment, I am still not sure I will get pregnant, but I think I am coming to a place where I am finding closure, with or without another child.

I will keep you posted.