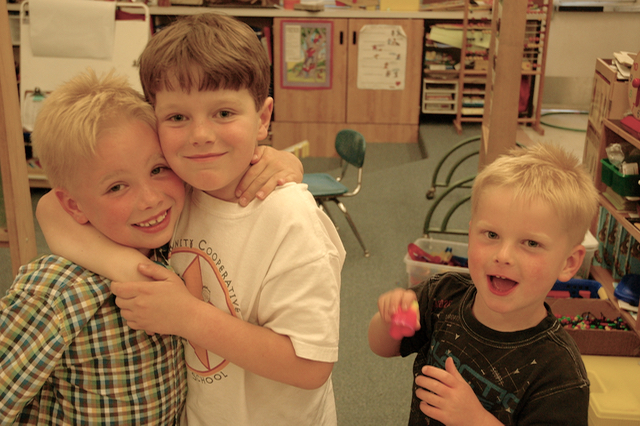 Kindergarten in the SLC

Today was Kyle’s last day of kindergarten. I can’t believe that kindergarten is over. The year has flown by. And as I drove him to school this morning, he became really quiet and sad when he realized that it was his last day.

You see, I was so nervous for him to start. Ask anyone who knows me. I was a mess. I was so nervous for Kyle NOT to go to the neighborhood school. As time went by and we adjusted, everything was good. Sure, he is now kind of out of the loop as far as our neighborhood goes, but maybe that would have happened anyway. He is still sad he doesn’t get to see friends like Harry and Charlie everyday, but this year I think Kyle found a place where he feels safe being himself. Could we ask for more?

So, moments ago, as we met the kids from his class at the park after school, he and his little friend asked us all to stop and pay attention and then they began to sing a made-up song about how they were about to launch their imaginary rocket. I couldn’t have been happier.

Kyle and his friend, Liam, singing in operatic voices: “Parents listen. We are about to launch our rocket…” (the rocket was a little tree, by the way). “Look this way for you will see our rocket launch do dah dee.”

It took a lot of adjusting, but it has been a good year.