. . . Bullies do not stop! Bullies are not always who we expect them to be.  Who do you blame, because Bullies are often Bullied? Kids who do not Bully or are not Bullied keep their mouths shut. They keep their mouth shut maybe because it is easier to fly under the radar.  Learning Tolerance? I am not sure if I buy it. I hope this new anti-bullying movie, BULLY, makes an impact. I really do! I do think  the movie will let kids at least know that they are not alone and that they have someone who will listen. 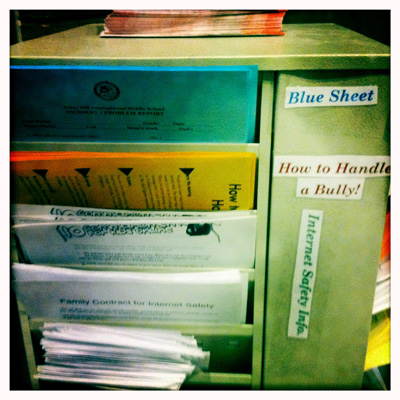 Before I get into things let me throw out this DISCLAIMER. Dave and I are far from perfect, especially as parents. I am very aware that my kids are not perfect either. I also can tell you that my sons have been accused by friends, acquaintances, church folk and family of being unkind and mean. When I come to their aid I have been called a liar, ignorant and my personal favorite said by a random mom, “My son would never lie. I feel it in my gut. He is telling me the truth. He did NOT PUNCH Eli in the face. Eli must have done something to him,” The end! I have also been called out on my bad parenting  (a few times) and have been told my kids are hopeless (another story for another day). Not only are Kyle and Eli not always on their best behavior, they are also big kids. They have a lot of energy and do not always make the best choices. One is often referred to as a know-it-all and the other often has a less-than-appropriate sense of humor. If the second was asked, he would probably admit that his less-than appropriate sense of humor has hurt a feeling or many.  Thankfully I have been told by the teachers of the suspected know-it-all that he really does listen and let others speak. Yay for good teachers! 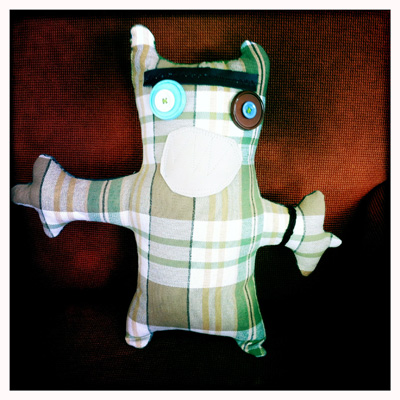 Homemade Ugly Doll, we LOVE you!

Back to the Blue Bully Sheet:

As we walked out of the office, there they were, the blue Report-A-Bully sheets.  The woman walked us right up to that carousel.  The blue sheets were tucked into a slot next to other school papers, sign up sheets for clubs, sports and all kinds of Middle School Information. It only took the very briefest glance for this thought to fill my head, “If I were a middle school kid, there is no way in Hell I would purposely walk over to this carousel, extend my arm and grab one of those Blue Sheets, even if I were being bullied.” I looked around. I wanted to make sure no other kids saw this woman hand my son the blue report-A-Bully sheet. Quickly I grabbed the sheets (she gave us two), folded them, tucked them into my purse, we thanked her and left.  Why did we need one of these sheets? Why don’t they have copies in their office? We only were asking to make an appointment with the counselor.  After Kyle’s illness, adjusting back to school has been tough.

Moments later the three of us sat ordering a late lunch. I had to ask my son about the Blue Bully Sheet. “Oh Mom! They are so stupid. If I fill one out and ANYONE finds out, it will be even worse!   I will just deal. If anyone finds out, they will hate me for being a tattle-tale! Everyone knows about those Blue Sheets.  If they know or suspect you filled one out and their name was mentioned, then they will pick on you even more, especially if they get in trouble.”

Dave piped in, “The Cops have figured the same thing out. That is why you can tip anonymously now.”

“No. You can text them now, and they can even respond to ask follow-up questions without knowing who you are.”

Here it is and here is what I have to say before I tell you that I think that all the special hand outs, videos, After School Specials and programs DO NOT WORK and may only perpetuate the problem. Change is not easy.  Kids are clever, there is peer pressure and really, where is Tip-a-Cop for kids?  The problem is so big and where do we start?  How can we get on the same page? One thing I have seen, experienced and is often discussed is that fact that parents do not seem to have the time, or seem to have a really hard time seeing that their same children who get picked on can also be cruel, get the wrong kids in trouble or adjust the truth.  This actually is a big issue. As a parent who has been on both sides of the Bully Equation, it is hard when bullying is excused or my kid is called bad and that’s that. Without common ground and understanding, I see a lot of parents battening down the hatches to help their children make it through the day. “If he won’t stop and  you have to punch him, well then punch him,” or, “Just because she doesn’t ger her way does not mean you are a bully.”  Parents are confused and discouraged too.

As a result, this is the kind of thing I see happening: Out of frustration, you see a parent become the parent who screams loudest (which does work, at least for that family). It is my experience that sure, the parent-who-screams-loudest probably does have a child that has been picked on,  probably picked on more than once and probably does need the situation addressed.  What happens with this particular situation is that the school (for instance) gets stuck in a parent-who-screams-loudest feedback-loop. They see the parent who screams loudest coming to the school door and to avoid the loud screaming, the school will do anything just to get that parent to shut up.  Herein lies  an innate problem. See, the parent-who-screams-loudest takes (sucks) a lot of energy resources, attention and eyes away from the kids who probably need an advocate even more; kids who may not have a parent who has the time to scream.  And then the kids who really are getting tormented are often too afraid to get help because they know there is a lot of super mean and ugly red tape they have to jump through first. And because school administrators are too busy and often listen to the loudest parent, the child who really needs help loses his voice.

I asked my kids about the mean kids and if they ever stop: “Um yeah, they stop for the day they are in trouble and then they start all over again.”

OK. OK. How do I articulate what I am thinking?

We have our roles. Bullies do not stop, do they?  Parents-in-denial do not change. Parents who think their kids are perfect do not change. The cool kids are too worried about being cool to change. The kids in the middle are too worried about being noticed to change and the “real” Bullies, well, we just let them bully, right?  At best, the bully may watch an Anti-Bullying video and change for a second. By the next day, they are back to bullying (or at least that is what I have been told). I do not believe anything works.  I watch the kids who get bullied. I have watched those kids all of my life. I have stood up for the bullied.  And when I did, every single time those two boys saw me they called me, “Petunia Pig,” starting from 9th grade until I graduated high school. I am not sure what I did except ask this boy to stop. One day I had it. I did open my mouth (shame him).  That’s right.  We were in Winnie the Pooh Together.  I was cast as Winnie the Pooh (typecasting for sure [wink wink]) and the bully was cast as Eyeore.  He kept picking on everyone. He was so crabby and cruel.  One day, like I said, I had had enough. I paused,  looked right at him and said, “You are just like Eyeore,” and then a few of us laughed. I am sure he did not like it. I am sure he was embarassed. What I said was not nice.  Yet, I do not think what I said merited being called Petunia Pig for four years, but that is exaactly what happened. He was going to break me (shame me too). Every single time I walked up the Senior Steps (yes, we had Senior Steps and you could only sit on them if you were cool or risk facing relentless harassment). Well, every time he saw me, he and his buddy would yell, “Hey, Petunia Pig.”  Guess what? It hurt.  Guess what? I often took another path to class, just to avoid those two boys.  I didn’t even call the other boy anything. I did not know the other boy. It did not matter. That was the price I was going to pay for opening my mouth  when I was 14 years old and asking this boy to stop. I have not stopped sticking up for others, but I must admit there are times when I still have a hard time sticking up for myself. Like some acid flashback, when I want to ask someone to stop, I am transported to those painful moments when I was too afraid, too embarrassed  and where I always feared running into those boys, who called me a pig.

These days we read the books, we all dress our kids right. Often I think the bullies look weirder than the bullied. I do not get it. Maybe it’s this. We all want to fit in. Society tells us wee need to fit in. We are taught it is really important to be cool and or popular.  So when you are outside of the box, somehow society justifies that it is ok to ignore or make fun of you.  How many times have you called someone out because they are different? I know I have.  We are not perfect. We can get better. I have had enough. I think many of us have had enough. Unfortunately enough of us will not open our mouths and ask people to stop. Parents do not want to see that they are part of the problem. We all do not want to see that even when our own kids are tormented that they are not perfect.

And back to those blue bully sheets, seriously, to help the bullied, you ask the kids who already feeling helpless, out of place and singled out under the microscope of the glaring eyes of other kids to grab one of those blue Report-A-Bully sheets, sheets that are prominently displayed for the whole school to see and know? Come on, those sheets are blue? Any kid that sees another kid walking around with a blue sheet in hand knows? Guess what? The blue sheet is a stupid Anti-Bullying-Scarlet-Letter, a blue Scarlet Letter that will only make the bullied feel more of an outcast. Think! Please!  At the very very least, there needs to be a private, more discreet method of getting help. There has got to be a better way to help those who are being hurt!