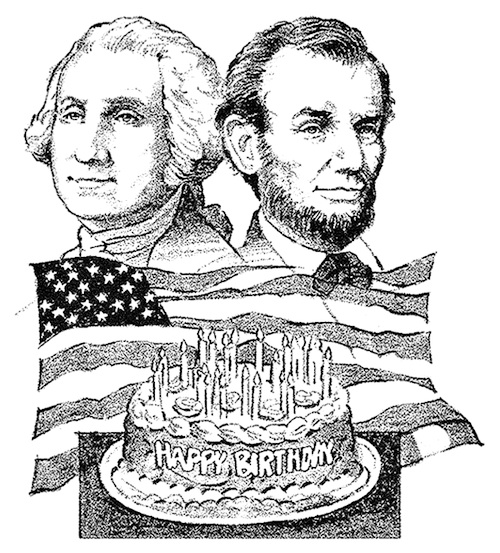 Honoring Washington and Lincoln through bike riding is not what I think we were trying to do, yet in honor of this very President’s Day, I will try to pull a rabbit out of hat, and will most certainly convince you that indeed our family’s are-you-crazy-it-is-still-winter-snow-ice-slush-filled-and-freezing-wind-bike ride was in honor of two of our greatest presidents.  Happy President’s-the-kids-are-bored-because-they-are-out-of-school Day!   Somewhere between the wind piercing through my helmet so insanely I thought my head was going to explode and swearing out loud, because it is possible that one of my children did not use their best crossing-the-street-into-oncoming-traffic skills, The President’s Day spirit was ignited when my friend called, and yes, I did stop riding, unzip my jacket pocket, pull my phone out and answer it. “What if someone really needed to talk?”

As she asked what was up, I shared with her our crazy idea, “yes, we are on a bike ride. Dave is still sick, it is very cold, and the boys just took off.”  I rattled on, and instead of telling me I was indeed crazy, she immediately caught the President’s Day fervor or should I say, fever, or simply wanted to get her stir-crazy son out of the house, and before we were even off the phone, she did just that. She insisted he grab his bike helmet and hit the road. Her son, with the strength of an army and the wisdom of a Founding Father persevered, and like Lincoln and Washington did before him, this young man [insert a quiet crescendo of patriotic music in the background]  held strong, biking those icy Park City roads whilst dealing with the perils of his broken-back-brakes.  Oh say can you see!

I am not aware that either president, who are both celebrated today, were bikers. Were there even bikes back then? Yes, between George Washington’s presidency, 1789 – 1797, and Abraham Lincoln’s presidency, 1861 – 1865, is the first known and “verifiable” bicycle record.  With the knowledge that bicycles came to being after Washington and before Lincoln, I knew my only hope was Abraham Lincoln. Did Lincoln ride a bike?  I searched the internet high and lo and could not a single record or photograph of Abraham Lincoln on a bike, not even a picture of him standing next to a Penny Farthing.  I did, however, find a picture of cats riding Penny Farthings, of course I did. 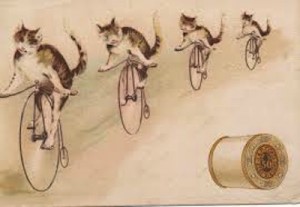 I hung up the phone, nestled it back into my jacket pocket, Dave and I made our way off of the treacherous, ice-rutted bike path and onto the road. I could tell he was loosing steam. We saw the boys ahead, biked over to them, and to my utter dismay, they wanted to continue.  “Aren’t you cold?” I implored?  “No Mom. We are great! This is awesome.”  Kyle said followed by Eli. “We are having such a good time.”  The grey skies were pounding on my soul and all I could imagine is being back in our warm car.  It was time for politicking. I borrowed the suggestively spun words Eli has so often used before, and said, “Hey, I have an idea. (Eli’s words) Why don’t you both bike the paths, Dad and I will bike back to the car, and then we will meet you for snacks.” Isn’t our country based on compromise, didn’t our Founding Fathers try to find a way for all men to get their way (and women)?  I only waited seconds for a response. 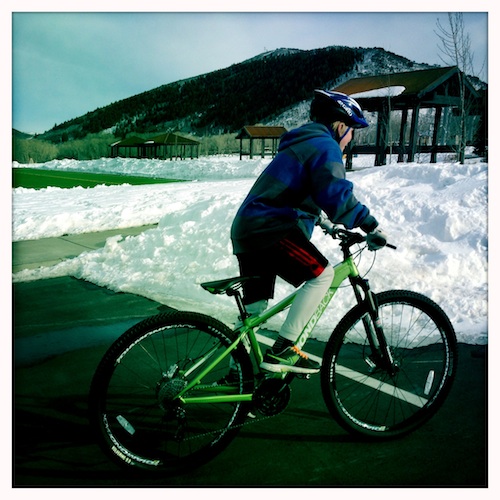 “Mom, that sounds great.” They both said, and again followed by Kyle assuring me, “Mom, I have my cellphone. I will call you if there is a problem.”

“Thank you guys!  Stay together.” 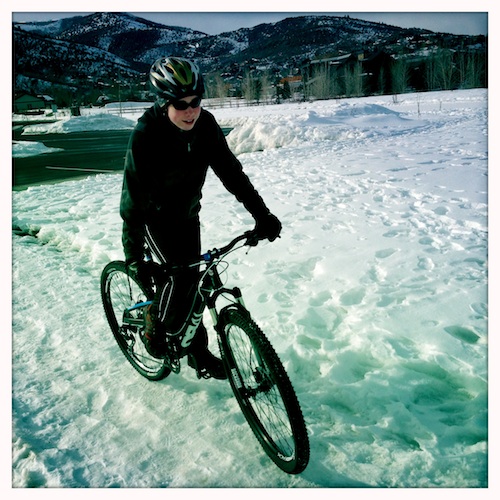 At that, they were on their way and thank God so were we.  Dave and I talked about both Washington and Lincoln on our bike ride back to the car (no we didn’t), we talked about our great country (not really we were mostly quiet). Oh yes, we took quiet pause to reflect on this great nation of ours. Yes, that is what we did. Back at the car, which was parked at a park, I urged Dave to walk a lap with me. We discussed why the Lacrosse/Soccer field is so green with all of the snow around. “Of course they plow.” Dave said, and then we made our way back to the car.

I would like to think we were thinking about our Presidents and at the very least I think at some point I thought about Sally Field playing Mary Lincoln in Steven Spielberg’s recent Lincoln movie. It’s true. I did think of Sally Field and consequently thought of Abraham Lincoln. See, Friday night, Dave and Kyle were nerding out at a board game convention.  Eli and I had not seen the latest Spider Man movie so we decided to RedBox it. While Spider Man was talking to his aunt, who is played by Sally Field, Eli said, “Mom, I think I have seen her in something before.” That is when I stated, “Eli, she plays Mary Lincoln, Abraham Lincoln’s wife.”  (President’s Day on the brain. Check.)

Back at our meeting spot, the boys wanted to keep riding. Ok, Kyle wanted to continue, and I encouraged Eli to go on with a bribe. I bought both boys an Orange Juice.  They had a few sips, and again were on their way.  Dave and I drove to our final meeting spot and waited. That is where I picked up the conversation with my friend. Dave was on a business call, the boys were still biking, and I had a minute.  Instead of talking Washington or Lincoln I insisted my friend watch one of my current favorite You Tube Videos, Sweet Brown in “Ain’t Nobody Got Time for That!” I hope she watches it, and I hope we all know that even if we aren’t really thinking about Abraham Lincoln or George Washington today we actually are. In all seriousness, without Abraham Lincoln, ladies like Sweet Brown may never have had the opportunity to live in their own apartment let alone tell the world about going out to get a pop. And all of you who hated George Bush and those of you who detest Barack Obama, well remember, because of George Washington, they can only serve two terms.The people wanted him to serve three terms and he put the kibosh on that, establishing a customary policy for presidents to serve no more than two terms. 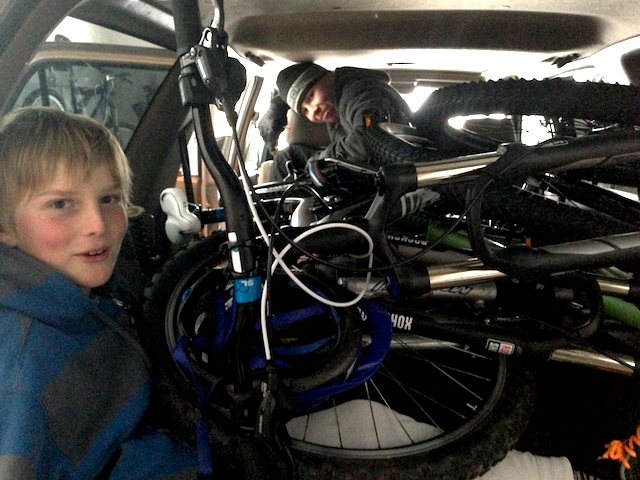 Without a bike rack, because Dave recently sold it, we made do and shoved our bikes into the truck, and then shoved the boys in between the bikes. We made our way home, and were grateful we dis a little bike riding. Next year remember you can always bike for President’s Day or at least tell your kids that in honor of the presidents they need to get out of the house.