Good thing we did not have any idea how the day would end when it began. 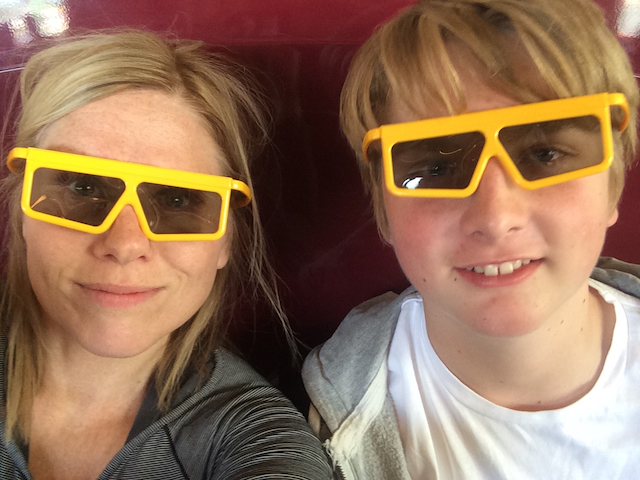 E and I at Toy Story Mania, Disneyland

“May the fourth be with you, Kyle.” I laugh and say out loud. Kyle and I are currently leaning against the wall of California Adventure’s Toy Story Mania ride while we wait for Dave and Eli. A sea of Star-Wars-shirt-wearing theme-park goers stream by, which of course prompts me to ask,  “Kyle, doesn’t Disney own Star Wars?”

Stilling waiting and still overwhelmed with various Star Wars T’s,  I still cannot see Dave or Eli. I know they are somewhere in that winy, long line. While thinking of our impending ride, which is basically a moving video game, I say, “Dad always wins Toy Story Mania, (and he did again today — twice).“

“Yes. Yes he does.” Kyle, not looking away from his phone, replies. And because Kyle is about a foot taller than me, once he does look up from all things iFunny, he can see Eli and Dave.  ,”Hey look, they are way over there and are a half an hour away,” (more like ten minutes).

Wait. Let me back up. Moments ago Kyle and I walked to the California Screamin’ ride. We were supposed to meet Dave and Eli there. They ran ahead to get California Screamin’ Fast Passes. And after relieving myself I was relieved to hear that Dave and Eli had moved on and were waiting for us in the Toy Story Mania line.  As Kyle and I walked to catch up, we both realized and then said out loud that we were a little nervous to let anyone know that we were at Disneyland — again. Truth is we go to Disneyland often, and here is why. We have Season Passes. A friend whose parents live in Southern California recommended buying them years ago. Season Passes cost  the same (approximately) as paying  full price for three days .  This is our second round of Season Passes.  And because we happen to be in LA, we thought we should use them before  the Summer black out days are starting soon.

So today we are at Disneyland.

And moments before Kyle and I tried to find Eli and Dave at the Toy Story Mania ride, our Uber driver (dude wearing hipster glasses and getting a masters in English),  dropped us off at the front entrance to Disneyland. As we neared the end of our trip, he sheepishly announced, “you are my first ride.”

To which Dave boldly responded, “You’ve done well.” To which I wanted Dave to say, “live long and prosper,” but that is a Star Trek colloquialism, not Star Wars, so really not appropriate for May the fourth, right? Instead Dave followed his uber-driver-you-have-done-well with a, “we will make sure to give you five stars.” And Dave quickly followed his fives-stars comment with,  “We know how important the ratings are?” Yes. Ratings are what seem to drive humanity. Nevertheless, and kind of an aside, interestingly enough, $4.00 is the total we paid from our Hyatt Regency Garden Grove hotel to theDisneyland front gate. In contrast to the Disney Anaheim shuttle, which is $4.00 a person. And another complete aside, if you’re a Diamond at Hyatt, which we happen to be, because the Hyatt House Emeryville is the hotel we have been living at for enough days to qualify us for Diamond status, stay at the Hyatt Regency when you visit Disneyland. As they say, “we treat you like royalty,” and they mean it. Ask for Keyonna. She is delightful and wise. Be nice to her and I promise she will take care of you.

Back on track and now trying to undo the chain so we can stand with Dave and Eli,  in the spirit of the day I hear, “Have you ever had a Wookie cookie?” I hear Dave and the boys laugh, and am too busy thumbing all these words into my tiny phone screen to look up. Then the answer, “They are kind of Chewie.” I am not sure if the additional laughter was true enjoyment or conciliatory, but the next words I heard were chastisement, and those words were directed toward me.

“Scotty relax!” I say in good fun to Scotty, the friendly Disney sweeper, who just chided me for texting instead of paying attention to his chain trick and accompanying joke.  What he didn’t realize and why should he, is that I was actually writing his joke while he was telling his joke. “You missed it!” He hollered and then laughed.

We moved on and then I heard Dave announce, “Ok. Seven more minutes.”

“What? Of course!” I respond, because I assume Dave is using an iPhone app to estimate the line time.

“We will see how accurate the line estimate is?” Dave continues.

I turn around and as Dave (gently) swats Eli away, I ask, “Dave, is there a line estimate app?”

“Yes there is, but I have deleted it.” Dave responds.

“How are you estimating the line time?”

Eli places the yellow plastic pair of 3-D glasses on my head and continues to bump into me. Is it because I am not paying attention, looking down and typing feverishly into my phone? Probably.

We are almost at the front. Thank god Eli wants to ride with me. Dave will win. We all know he will win. Eli puts his arm around me and says, “I am going with mom.” Then he whispers into my ear, “then we can tell Dad you won.”

Somewhere along the way, the ride stops working and the targets for our silly, pull-the-string-to-shoot video game guns stop working. 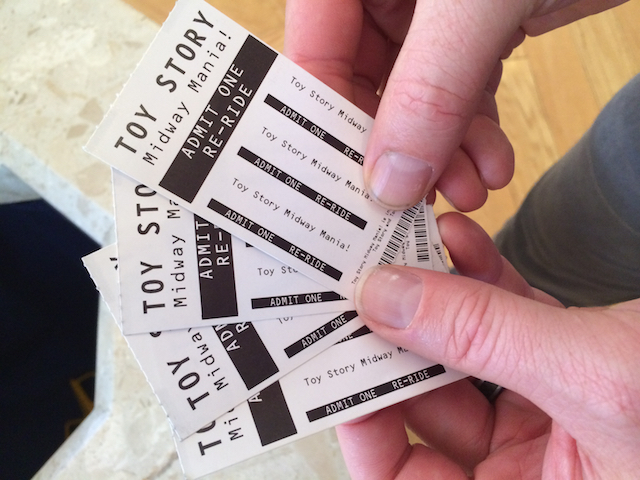 I tell the Disney lady and she hands us four “re-ride” passes. I am grateful for the do over and I begin to think of all the ways someone can game the system and why gaming the system really takes the joy out of freebies and do-overs.  I think of the words I tell myself in these moments,  “Be nice. Don’t take advantage. Don’t vulture. Don’t demand! And mostly, do not place the proverbial  hair in your food to get a free meal. Bottom line. Do not act entitled and Do not be shameless. The end.”

Literally thinking about my hair-in-the-food metaphor reminds me to ask Dave, “Did you make a dinner reservation?”

“What’s the restaurant called?” I ask.

“It’s the Cafe Orleans.”  Dave responds as he opens the Disneyland website on his phone. We cannot got to Disneyland without Monte Cristos.

“You can tell them you are Gluten Free.” He contines.

As Dave makes his online reservation, I think of all the haters, and I want to say, “Sure, you can make fun of gluten free people like me. Alas, when you are really Celiac, or as I say, ‘not fake allergic,’ it is a relief knowing  that people will accommodate. And in truth, it is awesome to be accommodating even if you are say, simply not in the mood to eat Gluten that day.” I am glad I could tell them gluten free in advance, and yes it made a difference.

Our day continues. We plan on being at Disneyland until 10 PM (like we always do). I sit by Dave for our Toy Story Mania re-ride. The game ends with Dave winning, and me saying, “You’ve never gotten the beaver?” To which Dave says, “I always get the beaver. Sometime I get the cat.” 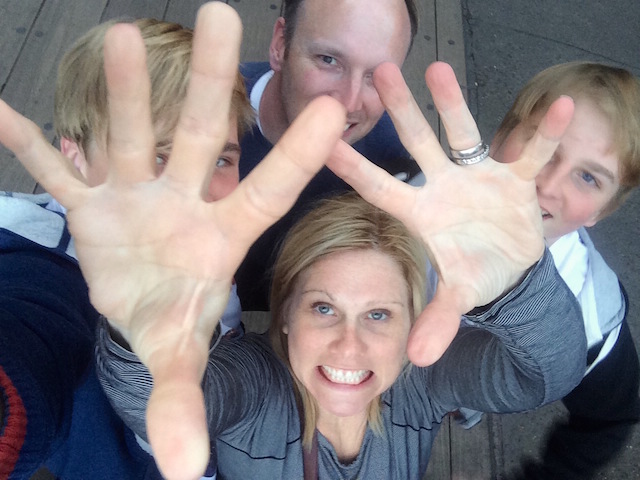 Selfies on our way to Space Mountain

We find ourselves in Disneyland. In truth we started our day in California Adventure. And as Kyle and I find ourselves walking side by side again from behind we hear, “This is longer than I would wait for a Dole Whip.”Those are the words uttered by the hipster dude behind us, and he says them as he eyes both our Dole Whip and the super long Dole Whip line to our left. Kyle and I laugh. We laugh because we know.

“This is longer than we would wait too.” See, the quickest way to through Dole Whip line is always going in to the Tiki Room turn-style entrance.  Outside of the turn-style you may wait thirty minutes, while inside you wait five. You don’t have to watch the show. It is simply another line to the yummy Dole Whip deliciousness.

Alas, moments after we left the Indiana Jones ride, and did not think twice that Dave was unable to get Space Mountain Fast Passes, we arrived at Thunder Mountain Railroad.  The dude said, “this ride is closed.” We thought, “Oh no. Not another broken ride.” And then happily we worked our way over to Tomorrowland, snapping a billion selfies along the way. If we must, we were  ready to wait in the long Space Mountain ride. As we walked up to the Tea Cups, a ride we always ride (even though it makes poor Dave sea sick — what a good sport), we heard, “Disneyland will be closed in five minutes,” or was it ten minutes? Regardless, and whatever, when does Disneyland close at 7:30 PM? And why didn’t the many friendly Disney folks warn us?  Planet Disneyland was running at full-speed and then it came to a crashing halt.

Disneyland. I am not buying your, “We-only-stay-open-for-spring-breakers excuse. In the future and be warned. Check the hours before going to the park.

Boo! Disneyland! So not cool!