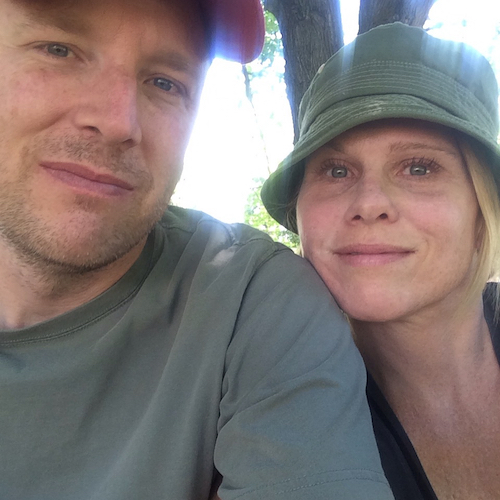 I started writing this post on Saturday. I keep pausing, re-writing, talking with Dave, and then asking him to read.  Rightly so, he suggested I develop my thoughts. Now here I am starting over.

Regarding my seventeen year union, like I have done in the past, I want to publicly celebrate. I love Dave and our life together makes me feel super blessed. This year, instead of feeling forgotten, or feeling extra grateful, I simply feel lucky.  Because I do, I feel the need to infuse perspective into my marriage soliloquy. Here is why. Recent events, like the shootings in South Carolina, and marriage equality, are issues I have not had to deal with. Nevertheless, they are issues that are critically affecting our world.  At the very least, I want to acknowledge them.

And because these events fell on (near) my seventeen year anniversary, I most definitely cannot ignore them. To me, marriage equality is not black and white. No issue ever is. And being black or white is not even black or white. We could argue religious values. We could talk racial divide. Or we can chose to see what is in front of us. We are all humans! I think being human is big part of the grey. None of us are perfect. All of us have different experience, and different ways of seeing the world.  I hope it is ok that I share mine.

Here it is. I am middle class and white. I have the legal right to marry. And the only thing I get when I am walking down the street is a friendly nod or a pleasant, “hello.”  I know my life is blessed. Marriage Equality is not something I have had to consider. Sitting in the front of the bus is something I never had to fight to do. As a result, not having the right to legally marry, or fearing being gunned down because of the color of my skin are not my stories. 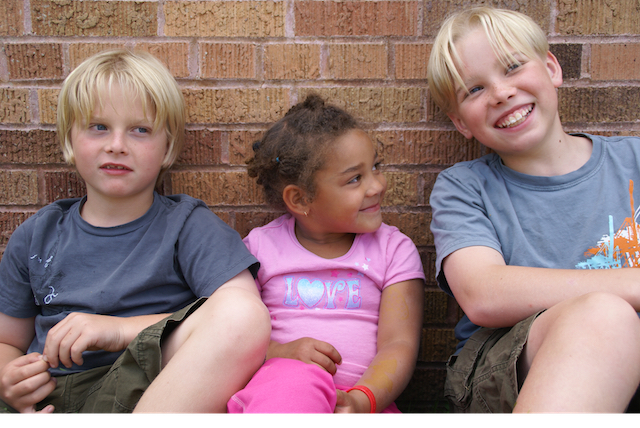 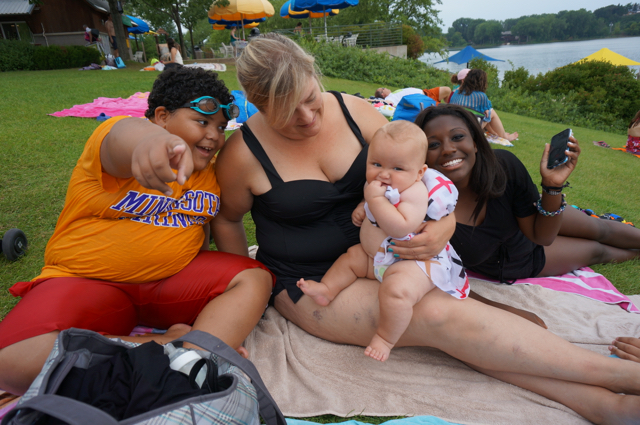 Marianne and the gang, Minnetonka, Minnesota

Marianne and I have know each other since I was five. As far as lifetime BFF’s go, she is it. Marianne is nice, Midwestern, of Swedish extraction. Her ex-husband is from Cameroon. She is a single mother, and is also raising an African American girl who she rescued from a tough North Minneapolis neighborhood. Guess what? Marianne’s lovely bi-racial children are treated differently. Not always, but the color of their skin is not easy for some to ignore. One may argue, “well, her son did bad things.” And then I would have to add, “he was also profiled.” It all becomes grey. 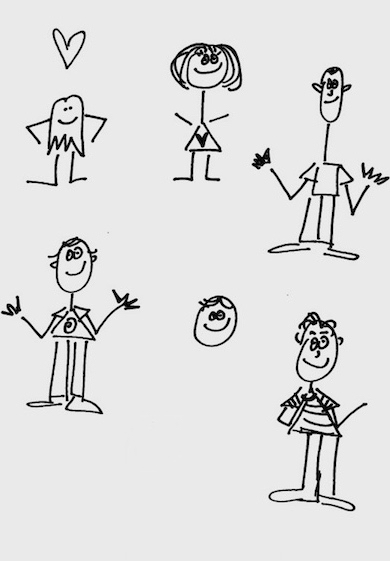 On a lighter note, and regarding marriage equality, as our friend hilariously quipped:.

“Wow. You guys almost made it to your 17th anniversary before the whole institution was blasted into meaningless ruins. One day away! You guys were so close! Oh well. Otherwise I would have to wish you happy anniversary.” (Hey and after you see me in my wedding dress, you may agree that a do-over is in order, he he.)

…Saturday as we walked to a movie, I told Dave about my post.

“Marriage Equality is not an issue we’ve had to face. At most, it’s just a marker that we can use to define ourselves in the culture war.” Dave said.

“You are right.” I agreed and quickly continued, “And I am white and economically privileged.”

“I feel like I have to say something, yet I do not know how to talk about race, or marriage equality without looking like I am stealing someone else’s thunder, or sounding like a complete idiot. I know I will offend someone.  And offending people is not what I want to do. I am overwhelmed. I want to celebrate our marriage without stepping on toes. Ay-yi-yi! ” I responded.

So that is what I have been trying to do.

Dave is correct. I will offend someone out there whether I am writing about travel, about my boys, my mom, my friend with biracial kids, my dysfunctional family, crazy mommy bloggers, the escaped New York prisoners, or Greece.

[insert deep breath here] This is what I feel.

I like being married. I really like being married to Dave.  Dave is cool. He likes me, even crazy PMS-me, and he always laughs at my jokes – always. (Note from Dave: for the record, I do not like PMS Beth) [Note from Beth — what? PMS Beth is so passionate, (wink wink).] Marriage is awesome! It is not easy. I am elated we have lasted this long. I am really happy that Dave remembered our anniversary. In fact, my heart soared.

This is how it went down.

Saturday morning Dave opened the refrigerator and handed me a little cardboard box.

Inside were two, heavily frosted (I love a lot of frosting), yummy cupcakes. He knows I love City Cakes’ Gluten Free baked goods. He followed with,

“I tried to buy you a big cake! They were out.” He continued.

Seriously, does it get any better than this?  Nope.

Love for Dave is what I feel. And high fives to number seventeen!

“Hey, I know what we should do for our anniversary this weekend.”

“Let’s go to Sundance and hike to Stewart Falls.” He replied.

“That sounds perfect.” I responded.

We really wanted to go to Sundance. Sundance is where we celebrated our super-secret-meltdown honeymoon. As we stood in the Owl Bar all of those years ago, I can still see Dave standing shoulder-to-shoulder with Robert Redford.

“Dude, do you have any idea who you were standing next to?” I said as we walked out the Owl Bar door.

When he asked, I honestly thought he was kidding.

“Dude! Really?” I asked, and then delightfully exploded, “Robert Redford! How awesome is that?”

June 27, 2015 was hot and our hopes of rekindling our crazy super-secret-Robert-Redford-shoulder-brushing-honeymoon were dwindling.  It is true. Hiking in one hundred degree heat felt more troublesome than romantic. Instead, we opted to see a movie, the very same movie we were walking to when our marriage-equality conversation began. 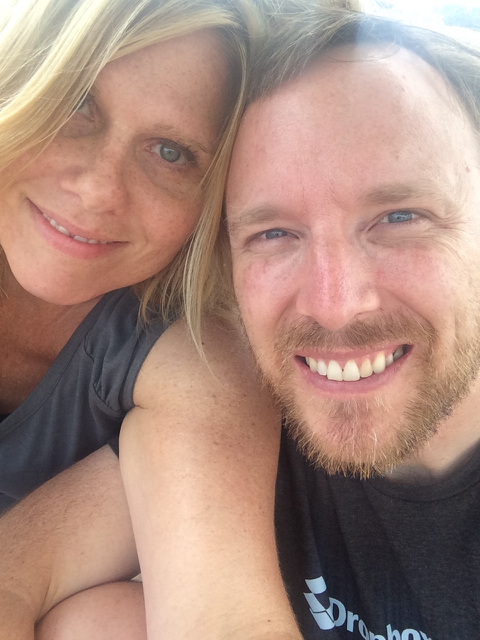 Here is what Dave and I concluded: Because we are straight, because we are white, discrimination is not something we have felt (except maybe being picked on, growing up Mormon). We do not understand what it is like to love someone, to want to share a life with them, and then not be able legally to make that happen. We do not understand what it is like to be confined to a certain space because of the color of our skin. We are married, and have been married for a long time. Additionally, we both have people close to us that firmly believe that marriage should be restricted to man/woman.  We know people who celebrate the confederate flag, and who think black people are dangerous. We also have gay friends who have fought hard for this legal right to marry. My best friend has fought hard for people to look past skin color.  We are not sure how to break through the layers.

For us, both racial prejudice and marriage equality move beyond a legal right, and become an issue of how we humans are treating each other.  Honestly, Dave and I both want equality for everyone: men, women, conservative, liberal, gay, straight, black white, short, tall, popular, dorky, rich, poor, and even Whovians.

And that is why I include EVERYONE here. I thought we were “one nation.”  Meaning, I thought we, as a people, could find a way to live together.  It is our Amazing Grace. The reality of my life is not lost on me. I know I am a woman, and realize women deal with our own issues of equality. That being said. I am grateful. I wanted to get married, and I could — legally. And I did not have to sit on the back of the bus.

We all can keep fighting to make it better! 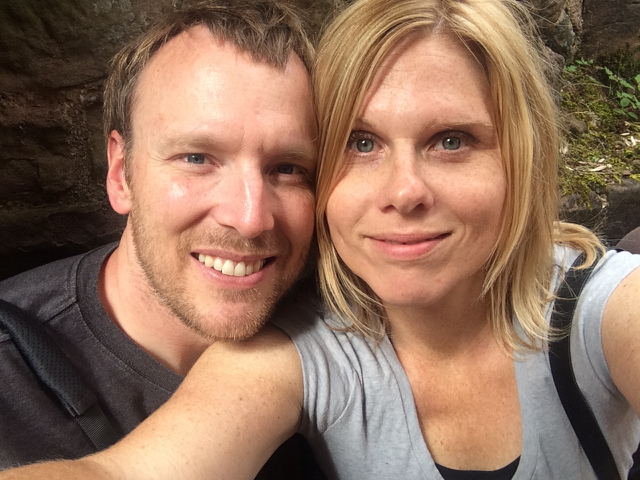 Dave and I. The Forest of Dean, Gloucestershire, England

Happy Anniversary, David Adams! I love being married to you!