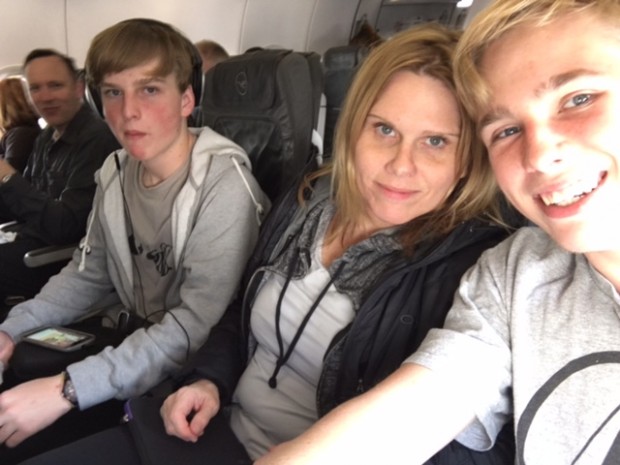 Years ago Dave and I became hooked on a documentary series called, “The Long Way Round.” It starred Ewan Mcgregor and his friend, Charley Boorman. The concept: drive your motorcycle from point A to point B — the long way. I loved this show. Perhaps I loved it because I had (yes, past tense), a huge crush on Ewan Mcgregor. Perhaps it was also my love of travel that drew me in, or maybe  the hilarious banter between the two men as I watched Ewan and Charlie figure out how the were going to make their way.

Fast forward to yesterday. I found myself texting my friend, Reginia, from the Frankfurt, Germany Airport,  She needs a painter in Salt Lake City, by the way. If he have any good suggestions, please let me know. Anyway, after learning about our flights and long layovers, Regina stated that we were taking the long way round, which of course made me think of that one show. Yes, I thought about Ewan and Charlie and motorcycles. Yes, I wondered what it would be like to be traveling with them, but mostly I thought about what a crazy, awesome journey I was on with the ones I love most.  Our journey did not include a former movie-star crush or motorcycles. It did, however, include long stops in San Francisco and Boston, a crazy ankle/leg rash, where I reached out to two doctor friends and a pharmacist in Athens, lots of rain, the best breakfast in Jason’s neighborhood [wink, wink], pastries from Mike’s in Boston,, and a huge climb to the top of the Bunker Hill Monument (my legs still hurt from racing up those stairs). It did not include a run-in with a Wahlberg or Beacon Hill Historic District, or at least, not that I am aware of.

Along the way I took some notes. I keep thinking about all of our trips and how I often wait until I am home to write. I understand why. I am often jet-lagged (am now), distracted with walking tours, historical sites, and yummy local cuisine. And when I finally have the time to write (like now), it is way too late.  I am sitting in Eli’s bed and he just asked,

“Mom, how much longer are you going to be?”

I realize as I type that catching these moments are what I don’t want to miss. I imagine once I get home I may forget that I had overtaken Eli’s bed. It was the outlet. Next to his bed I found the available outlet. I am using it.

Notes on My iPhone

Dave, the boys and I are at the American Express Lounge. As soon as we enter Dave urges,

We did and there were three chaises in this quiet area of a very noisy airport lounge. We noticed a woman sitting in the middle lounger. Empty cups and luggage were spread all over. Of course it  seemed she was laying claim to the area. She did not look up, and Dave and I ignored her as we took the two chairs on each side. I thought about all the people who would offer to move so we could sit together. She didn’t. We didn’t budge. Game on.. We had been up since 3:30 AM and in bed at 2:00 AM the night before. Those chaise lounges were hypnotic, no crabby airport citizen could bully us away.

Eventually I learned that this crazy-seeming lady was stuck in San Francisco. All my hopes of her leaving the lounge were dashed as I learned she would not leave until she got her business class upgrade.I know this because she put her airline call on speakerphone while while she filed her finger and toenails. Of course after all of this I assumed she was a travel bully, that was, until the bar opened. She left for a few minutes and returned with a half-filled glass of wine. She warmly looked at me and asked,

“Are you on your way home?”
“Nope. Just heading out.”
“Our world is strange.” I thought.

Because we had a sixteen hour layover in San Francisco, we decided to leave our comfortable chaises and to head into the city. It was raining and we felt limited.  Because Dave had a coupon (of course he had a coupon), we rode Lyft (not über) So after hanging out at the airport for a few hours, we got into our Lyft (the Lyft driver also works for uber, by the way).  The lady driver has a thick Eastern European accent and seems  a little ADD as she rapidly channel surfs landing on on Sheila E’s The Glamorous Life.” I was sitting in the backseat, which was covered in animal hair. I think cat hair. As she drove, and frantically changed radio stations, she spoke about the rain and asserted that she would only be able to drive 45 mph. She is now driving 70 mph, and in this moment the sun is out. Hello San Francisco! 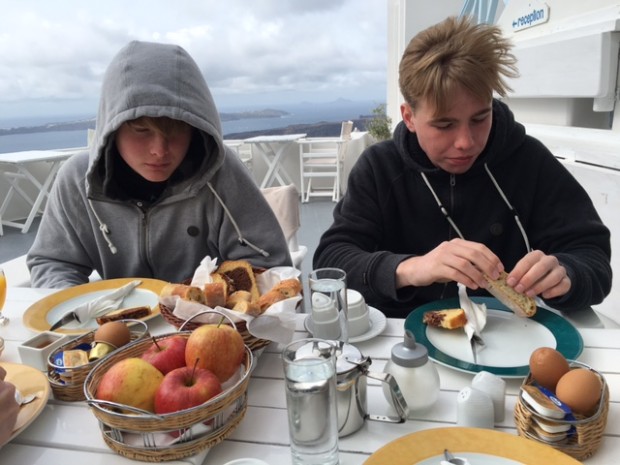 Breakfast outside in the cold rain. Santorini, Greece

Hours later, and after visiting Dave’s office, the Embarcadero, and the free train museum, we are at  the San Francisco bank I overhear a girl ask the teller if she could use her cannabis card for i.d.

The girl seemed relieved as she gleefully walked out the door to find the nearest ATM.

Now in Boston, our friend Jason, the orthopedic surgeon recommends  I read the book, “Being Mortal.” Then I saw it sitting on his shelf. We all had breakfast in Charlestown. Jason gave us a quick and informative walking tour. I said, “NO,” to the ship tour.

“Jason,  you know I love Dave, and I know yesterday was his birthday, but we have no time for a ship tour. Maybe all the other ship tours we have done will make up for us skipping this one.”

Dave pushed past his disappoint and we move on the Freedom Trail. 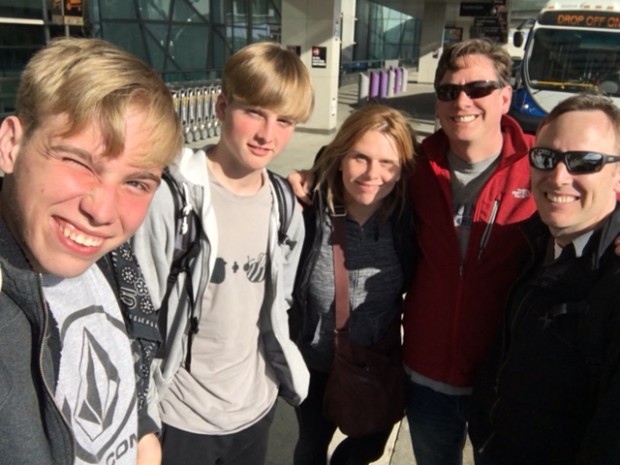 Hanging with our friend, Jason, in Boston

I have no idea what Frankfurt is like. I do know that now I can technically say that I have been to Germany. Woot. The Frankfurt  Airport Highlight: Our customs agent scoffed, then huge eye-rolled us, when we told him we are continuing on to Athens.

I would have to say that the worst part of the trip so far is the allergic reaction I am having on my ankles and calves. Each flight we took made my ankles swell larger and larger — making them cankles. Several times I thought I was going to claw my ankles to the bone. Yes, it wa gross and painful. I am currently on a regime of benadryl every four hours, and cortisone 3 – 4 times a day. Cross your fingers and pray this doesn’t turn into cellulitis. 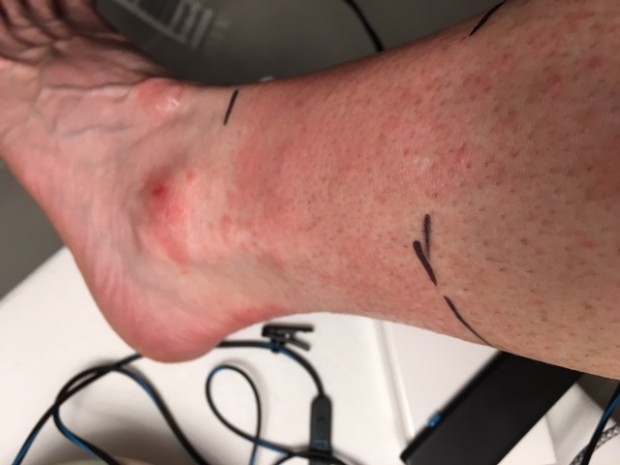 We are now in Santorni, Greece.It took us almost three days to get here. The rain followed us all the way. And with this cold rain, today was nothing like we expected. We are underdressed. The wind nearly blew us off the island. We ate breakfast outside in the cold rain, and napped for five hours (which we never do). Nevertheless, the day was awesome. We went on a super cool scenic drive. We drove through narrow streets we thought we could pass through. We ate a yummy traditional dinner. I am with Dave and the boys. The entertain me constantly, and are always up for a crazy long-way-round styled adventure, like going to the windy lighthouse on the Southeastern tip of Santorini. 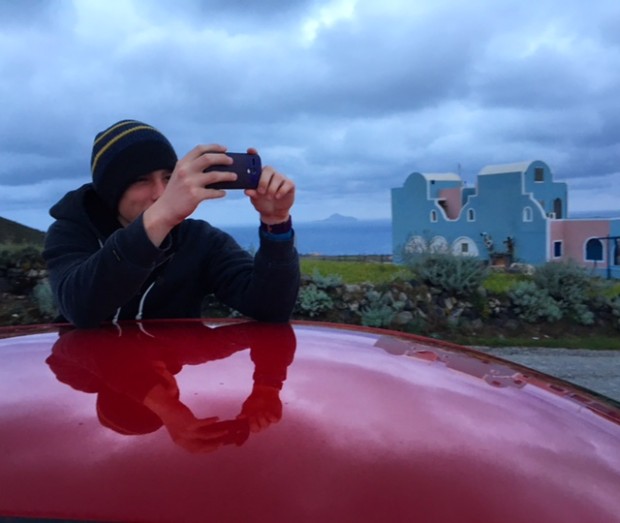 PS. I will add more pictures in our Greek morning 🙂 (he he. I was obviously tired when I wrote that PS.  Nevertheless, as promised, here are more pictures): 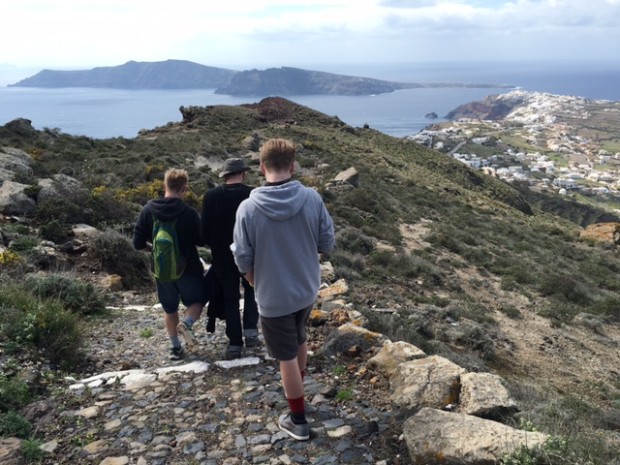 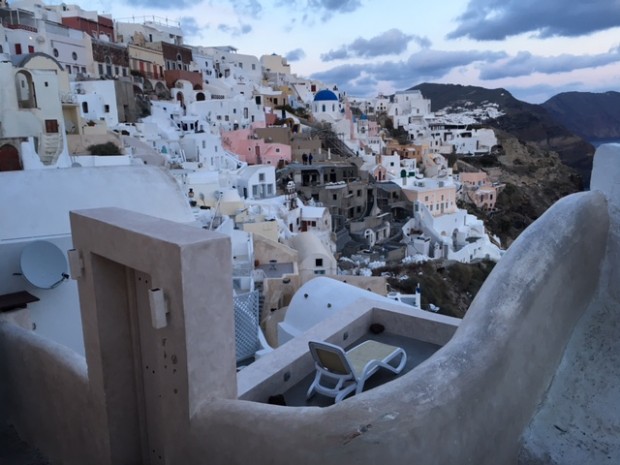 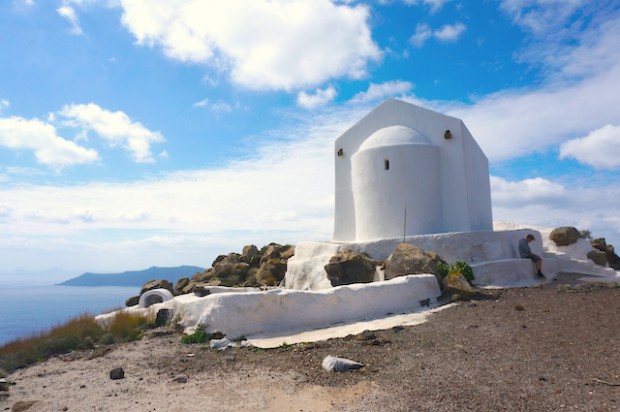 Walk from Fira to Oia, Greece