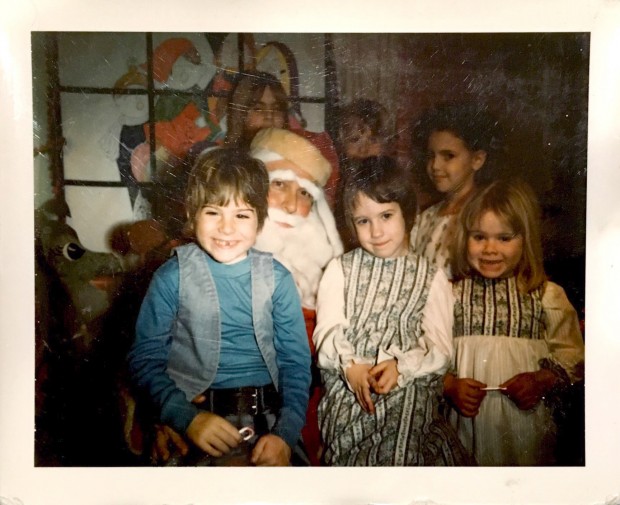 Christmas way back when

I think Dave would agree as represented in what he said earlier today:

“Beth, I love Christmas, but each year you make me want to kill myself.”

I would go as far as to argue that together Dave and I are clearly a gift giving mess. 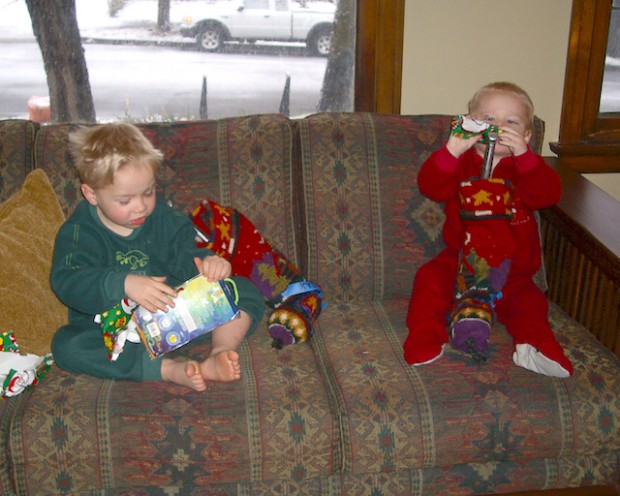 It is 2016. Here is where we are at.  According to Dave, I should shut my mouth, open my heart and exude excitement over each gift I am given. I not only think he is on to something, I think he is right.  We should be gracious. We should empathize. We should consider the receiver as much as the giver.

Of course as I consider a bigger reality, I feel compelled to push back and ask, what do you do if you hate the gift? Should you pretend?  Ok. That is too easy. Yes. Of course you should act grateful. Let’s complicate things. What if the gift is between husband and wife? What should you do then? Again Dave is correct when he asserts that one should act excited. And in truth, Dave always and absolutely properly exudes. Let me present another scenario. How deal with the non-grateful actions after the actual present-opening moment?  What if your partner was less than honest about loving (what you believe is) a thoughtful gift? As a result, they leave said unloved gifts in their box, untouched?  What is worse? The unused gifts, gifts your partner surely sees, or your your ungrateful expression, otherwise know as,  A.B.F.? (*By the way, A.B.F. is the active form of R.B.F. [resting bitch face]). 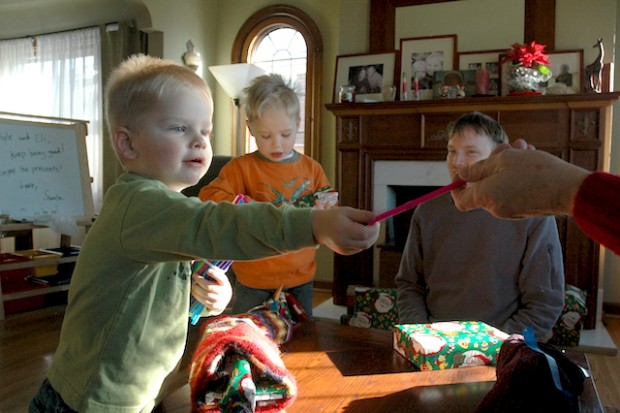 To solve the unused gift issue, over that time I found that if l buy Dave exactly what he wants and asks for, he is more likely to take his gift out of the box. It is a process. Well before the holidays, I ask Dave to add his choices into an Amazon Shopping Cart. Then I buy away. It always warms my cold, dark heart when he ups the ante by sending me other links and specific suggestions. Last Christmas was a coup. If Dave had not sent me a link to Traeger’s special Christmas offer, I would have never known he wanted a Traeger Grill. I even think Dave would say his Traeger Grill was the best Christmas gift ever.  We have all benefited from Dave’s perfectly roasted chickens and astutely seasoned brisket. I think it is as much fun for Dave to prepare and grill as it is for him to watch how we receive his heavenly creations. 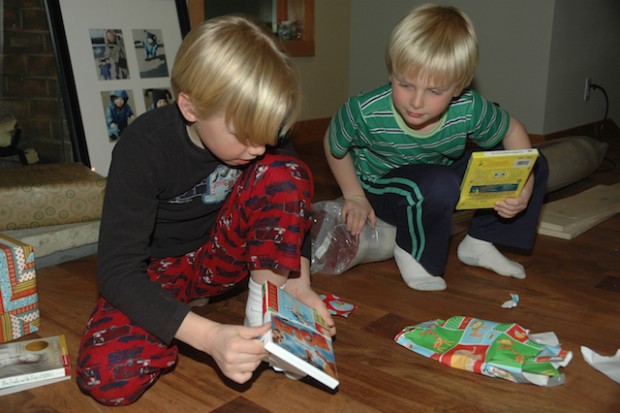 Nevertheless something upsets the balance, each year, even last year’s Traeger Grill year. Then panic sets in and misunderstanding runs rampant. And because I think we live in a world of greys not black, I think our issue goes beyond helping me Botox-up my Active Bitch Face and helping Dave be honest about gifts he is less pleased with. And once the shift in the force happens, I know we have entered the dark side. Obviously Dave is General Grievous and I am Count Dooku. Darth Vader would be too easy.

Picture this: It is Christmas morning. We are on the Death Star.  As Dave, General Grievous, hands me a gift, my hands will break into sweat.  My heart will race,  and my vision will blur.  I sense, because obviously I have the force, albeit dark, that Dave will be waiting in rapt anticipation for my smile to crack. I already know I will disappoint. Likewise, before his gift ever reaches my sweaty hands, I become manic making sure his Amazon cart is full. 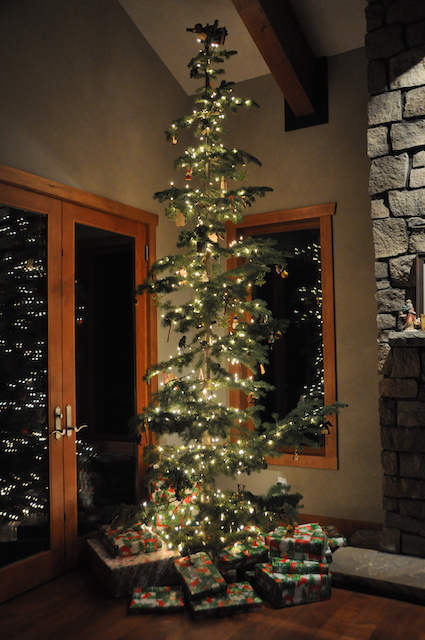 I have always been partial to a Charlie-Brown-style tree. We found this one in our backyard, Park City, Utah, December, 2011

Now back in our human reality know that our gift-giving nightmare is always made worse because I vomit honesty. Meaning, I cannot keep my truthy mouth shut. Consequently, acting like I love my new white long underwear is an epic feat. Spoiler Alert: I failed. In fact I am certain those long white underwear are where our selfish hell began. It was twenty years ago.  For Christmas, Dave invited me to his Washington DC home. At that time. I had more money than I had ever had. I had never been asked home to a boy’s house for Christmas. I was touched, enamored and over the moon. Soon I would realize that our expectations were not aligned, yet I did what any good girlfriend would do and bought Dave a crap ton of gifts. By the way, I had so much fun buying those gifts. I even made him a stocking.  I remember my eager anticipation as I handed him gift after gift. Alas, here is when I realized our disconnect. I could see it. I could see Dave’s shock as he opened those gifts. Disappointed, he said, “Why did you give me so much?” (Note* Dave also does not hide his A.B.F. well either).

Dave  excitedly handed me one gift. As I unwrapped, I eyed a pair a long underwear. I was flooded with thoughts and a variety of emotion. 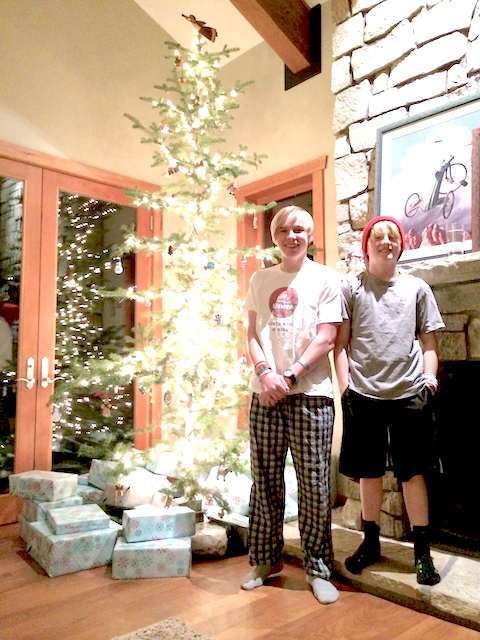 Ironically the framed picture behind the boys is one of the presents I gave Dave during the Washington DC Christmas, Park City, Utah, December 2013

Faster than I could catch my breath, the Christmas stocking now seemed silly, so did everything else. We were sitting next to his bed and all I wanted to do is hide under the Star Wars-sheets. (Yes. his bed was covered Star Wars sheets. How awesome is that?)  Instead, as I looked at those utilitarian body warmers. I burst into tears. I let my insecurity take over (obviously). I felt a rush of stupid, shame, and neglect. I could not catch my breath. Instead I opted to try to explain. I know, dudes love a lady who explains stuff. Nevertheless, it’s what I do. And I am sure that Dave was delighted to spend the next four hours having me create my very own very of Dickens’, “A Christmas Carol.”

Of course I kept explaining.

“Long ago in a galaxy far, far away, Christmas was the only time of year I did not have to use my own money to pay for something blah blah blah.”

And in that moment our dysfunctional Christmas feedback loop began.  I wish it did not matter, but somehow the moment we exchanged our first Christmas gifts has informed every Christmas ever since. Both of us were brats. Both of us could not see past our own strong wills. As a result, we still struggle and Christmas is not what Christmas should be.

Our loop is simple. I cry, express defeat, and couch my criticism in rationalization. Dave snaps and criticizes.

“I do not know why you gave me so much.”

An interesting side note: Those long underwear were not only thoughtful, they were practical.  Had Dave given me a moment to catch my breath, and had I held my tongue, I think he would have seen that. Yes. I cried, but those long underwear never remained in a box. In fact. I still wear them today. 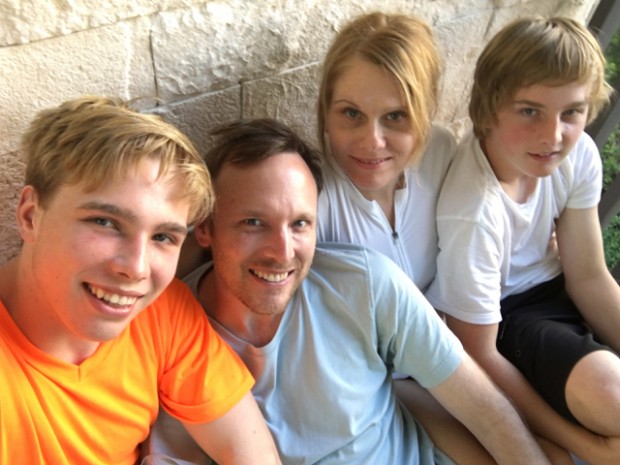 Back to my story: There is some good. It also took me years not to take Dave’s intent as a slight. I learned to appreciate Dave. First, he wants to (a.) Surprise you. Meaning, if I tell him I have a bunch of stuff in an Amazon Shopping cart, I will kill the surprise.  What I need to do is let him surprise me. And (b.) Dave feels compelled to buy you something practical. I get it. I am practical too. That is why I hate seeing those presents sitting in their boxes.

Further, I think it is important to explain my crazy. See, for me half the fun of Christmas has alway been my ability to return presents. Meaning, I don’t get upset when someone is not elated with what I give them. It really is the thinking-of-them that counts. Nevertheless, sometimes in the moment I forget that everyone does not see the world like I do. As a result, I too easily dismiss someone’s need for me to want their gift. I come by this behavior honestly. I clearly remember my mom attaching gift receipts to each and every present. On December 26, I remember gathering all the unwanted pajamas and sweatsuits, driving over to our local Target and standing in a long return line. Once we returned our items, my siblings and I would compare our cash and then go shopping for day-after-Christmas markdowns. It was a special time.  always knew I could get more-for-my-money the day after Christmas. In fact, returning became such a sport that I almost looked forward to the return more than the actual present. (Yes. I just said that). And before you completely hate me or judge me too harshly, I would ask you to consider the following: My family was not wealthy. I began babysitting full time during the summers at age eleven and worked full time hours. I paid for most everything. Christmas was that time of year I could bank on a little more. As such, Christmas for me was always of giving me a financial break. So stretching my gifted-dollar was the gift. And having the ability to return presents allowed me to buy more things I actually needed like underwear. 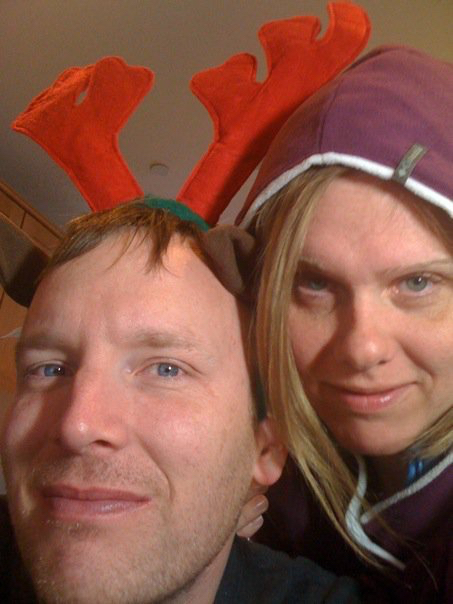 Then one day I married a super cool dude and he gave me the gift of staying home to raise Kyle and Eli. All of a sudden Christmas meant something different. And as much as I want to escape my history, navigating Christmas is filled with two people who literally grew up on opposite sides of the track. Dave did not live with scarcity. It really was about appreciating and finding joy out of both the practical and obscure. We are mostly at cross purposes except for the practical part. As a result, Dave was now in a position to buy me something I did not have to return. Oh, the pressure! So,combined with our new ability to buy the gifts we wanted and our practicality, it never occurred to me that my gift receiving behavior would actually ruin Christmas. I simply assumed Dave would admire my my need to return, or understand why I was not over the moon with say a rape whistle, a pair of long underwear or a Homer gift. In truth, and when it is not Christmas, Dave is actually delighted with my what he calls my “hobby” of buying and returning items and seldom keeping anything.

Ultimately, I know Dave and I fight and disagree  because we deeply care about each other. We are blessed to indulge such selfish considerations. I am humbled and sorry that have spent time worrying about receiving the right gift, or better, the right gift to return [wink wink]. Nevertheless, here we are. Dave wants to kill himself because I kill Christmas. I think we both know we need to get a grip.  We have been talking and being silent for days. We want to move past this. We need to move past this. We need to move past our high expectations, unfair judgements, and resentment of one another. We need step aside and remember that for starters, we have lasted almost twenty-one years. Valentine’s Day 1996 was our first date. We are blessed. I do not have to work. Our boys are healthy. We love each other. Utah is currently bursting with homelessness. I bet if we redirected our gift-giving disconnect to a family in need, they would not care what color of toothbrush we gave them, if the sleeping bag we provide is down-filled or synthetic, if we gave them ten presents or just one.   In the end,  I think instead of giving each other a panic attack each year we should do what Eli suggested and give our money and love to those in need. 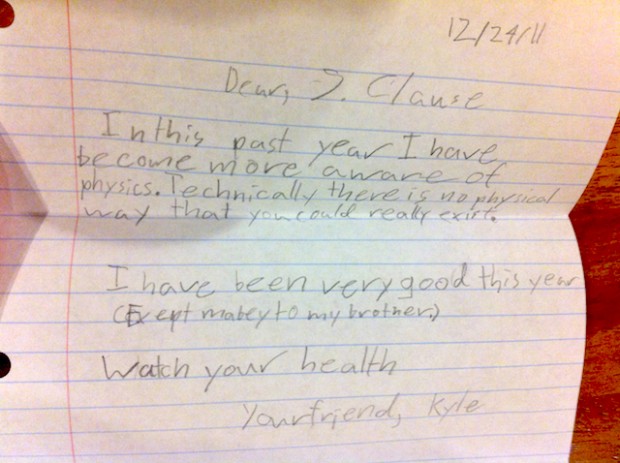