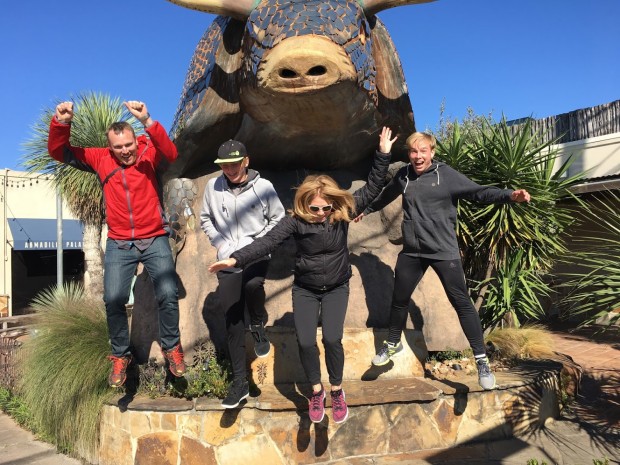 One idea. One moment. One thought. One place to start.

Before my life is over I want to make sure I do my part. I have a lot to say and a lot of observations to make. But then I get stuck in my head — waylaid.

Saturday night, as we literally flew through smog layer (the notorious Salt Lake City temperature inversion), my heart sank, or better, as we entered the inversion, my heart immediately covered itself in a misty, ugly grey. Grey is what I see outside. And as my head and my heart fill with gloom and doom, I try to escape to the rivers and roads I have seen around the world. I want to be in Italy. Last night Dave, Kyle & I went on a wintery walk. As we walked down our slippery street, we talked about magical Italy and the nuances of traveling there.

“We ate such an unregulated amount of gelato on our second Rome visit that by our third visit, even our favorite gelato place in the world, Giolitti, began to lose its luster. I know. I cannot believe I am actually saying this.” [insert long pause here] “I am certain the long absence will renew my half-blueberry-half-dark-chocolate-sorbetto love.” [insert short pause here] “And the whip cream on top does not hurt.” 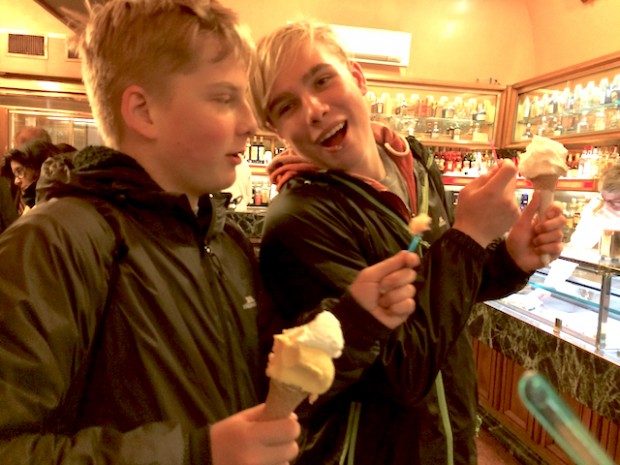 The Boys inside Giolitti on our second visit to Rome, February, 2015 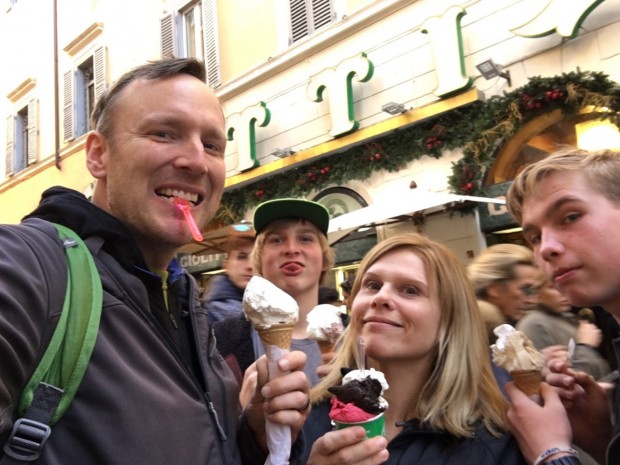 Us outside of Giolitti on our third visit to Rome, Italy (Dave’s second), November, 2015

Italy is special and we cannot wait to go back. I find excuses and reasons like what is it with those two gentlemen? I am consumed and now convinced we must see Verona. As we walked, we agreed that travel, and preparing to travel, gets me out of my head. Thoughts of Italy are a great distraction on these grey days.

Ok. I can just imagine Dave reading what I have just written. Better, I can actually see his face.  It is quizzically blank.

Then I ask him.

“You are all over the place.” He says.

“That is how I feel.” I shoot back and continue, “Dave, transitions are hard. Coming home is hard. I am trying to reset. I see the grey sky. I read the hate online, and I see a life where Princess Leia dies. And of course, the next day her mom dies too. I think Debbie Reynolds must have died of a broken heart.”

I would pause and make sure he was listening. I am certain he would be Googling something like, “Singing in the Rain,” or “what year was Carrie Fisher’s novel ‘Postcards From the Edge’ published?’” Once our eyes locked, I would continue,

“My heart would break too if I had to watch my child go.” 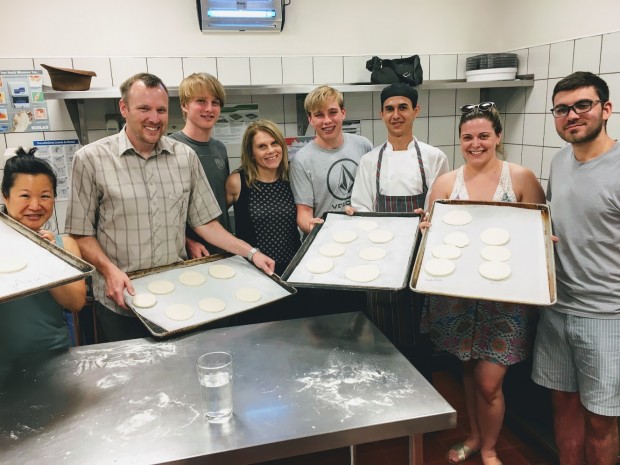 Us at arepa class at Chao Pescao at the Andaz Papagayo Resort, Costa Rica

This past weekend, on our way back from Costa Rica, we had an unexpected layover in Houston.  We arranged to meet with our friend, Doug.  Doug arranged a spectacular off-the wall-and-outsider tour of Houston. We saw a beer can house and some awesome art cars. And a super bonus: we started our tour at the Rothko Chapel.

Mark Rothko is one one of my very favorite artists. When I saw the room of Rothkos in London’s Tate Modern Museum I wept. No. Seriously. Tears actually filled my eyes and rolled down my freckled face. Then I sat on a bench in the middle of the Rothko room and took a flurry of pictures. How magic is it that Houston’s Rothko Chapel was our meeting place? We arrived on a freakishly cold Houston morning. We saw Doug’s Prius parked up the street. He was standing at the back of his car, grabbing a camera out of the trunk. As we stood there shivering, Doug warned us that the security guards were a bit persnickety and do not allow photography.

“As if.” I thought. “Didn’t he just grab his camera out of the trunk?”

Before I could as those very words out loud, Doug assured us he had a plan:

“Let’s make a game out of seeing how many pictures we can take. There are five of us and only one security guard.” (There were actually two, and they were planted on opposite ends of the round room.)

In the front of the Rothko Chapel, on the floor, were four evenly spaced black cushions. Dave sat on one. I sat on another. I whispered and encouraged him to take some photos.  We were both nervous. Out of the corner of my eye I noticed Doug holding his phone. He snapped three excellent shots. 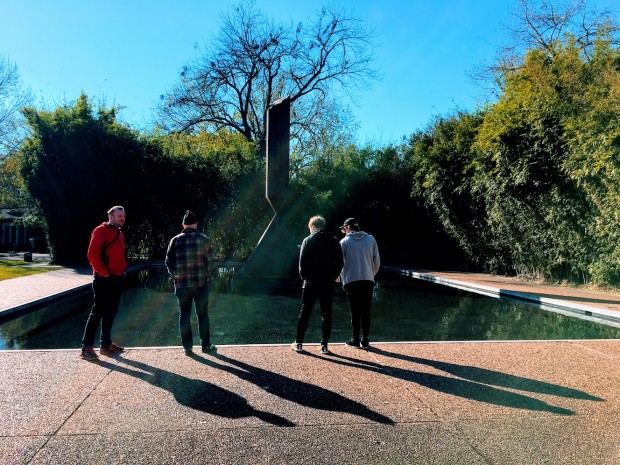 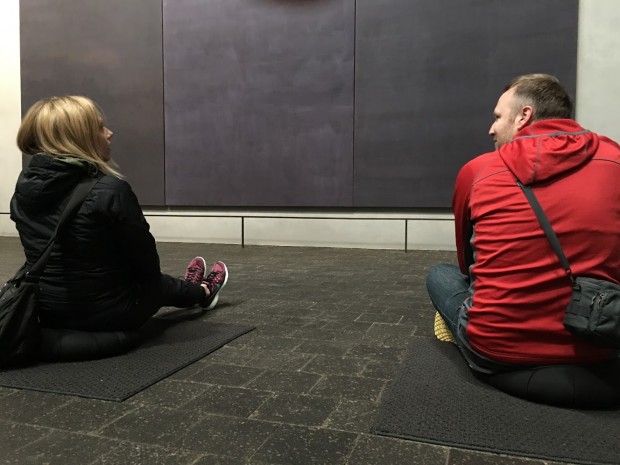 Dave and I inside the Rothko Chapel, Houston, Texas 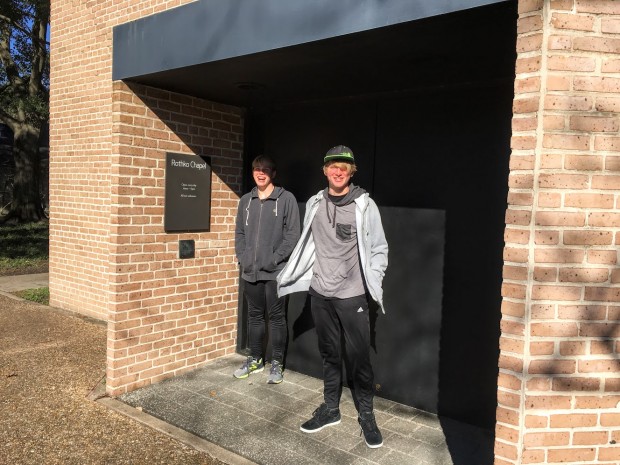 The boys outside of the Rothko Chapel, Houston, Texas

Soon the boys and I were back in our rental car, following Doug and Dave to The Beer Can House. Yes. Long ago a man made a house out of beer cans. The house is stunning. Really. At one point Eli quipped,

“What if he had made the house out of one beer can?”

To which our Texas friend responded, “That would be very Texan of him.” 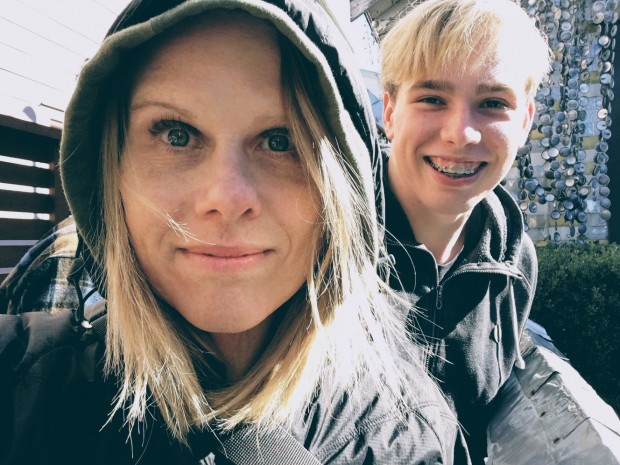 Kyle & I, The Beer Can House, Houston, Texas 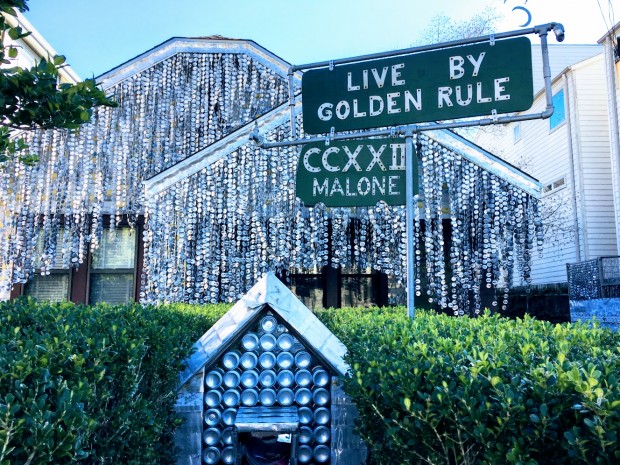 The Beer Can House, Houston, Texas 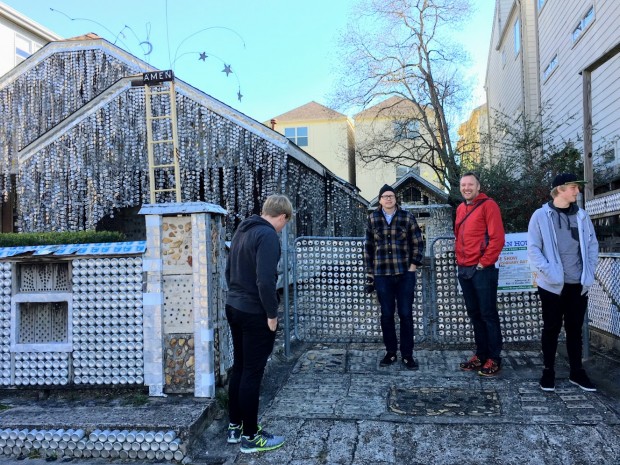 The Beer Can House, Houston, Texas

The house is closed for remodeling, I believe, and wonder what that means. We took pictures, noticed beer cans entombed in cement, were off to Buffalo Bayou Park Cistern.  In the warm, damp cistern we saw a flickery light, and heard the snappy-fingered thunder that accompanied the “art” rain. I wanted to take a picture in the bathroom afterward, but I didn’t. Then we walked the Buffalo Bayou Park trail to the red button. Finding the button was not easy, but was interesting. Once found, I pushed it as all four boys watched the river. I could not see, but heard them as they exclaimed:

I quickly pushed the button again. Then I stepped away. I saw it too. In one specific spot, just past the bridge, the water was rumbling. Freezing, we walked on. Up a hill from us we noticed a large statue. It was President Bush. Before I could process that indeed there are two President Bushes, I had already run up to give President George W. Bush a kiss (for my friend Rachael).

That is when someone shouted,

I haltingly stopped myself and simultaneously asked if there was a statue of the younger. 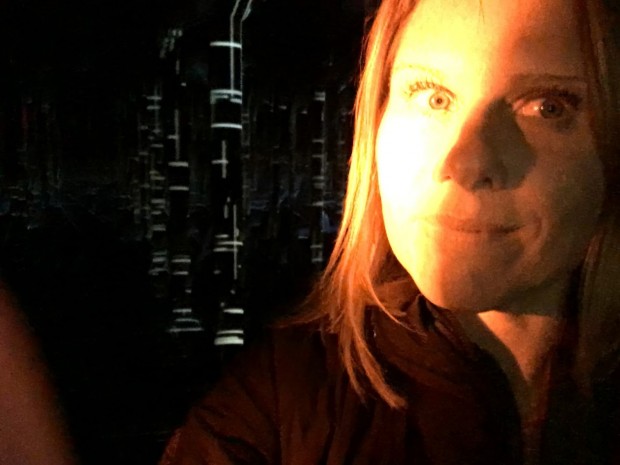 Me inside the Buffalo Bayou Park Cistern, Houston, Texas 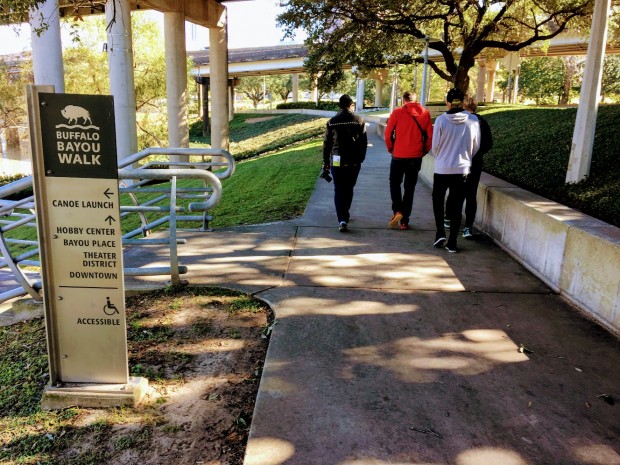 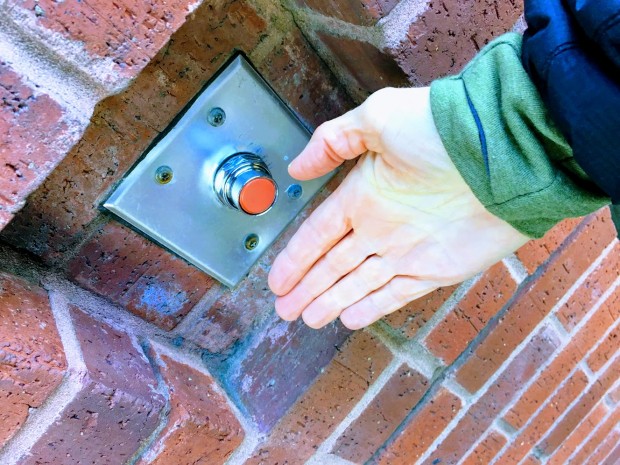 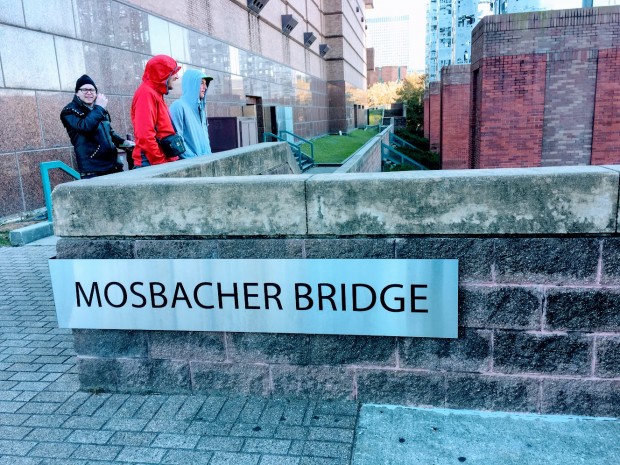 The guys looking at the water below as i push the Red Button at Buffalo Bayou Walk, Houston, Texas

We never found the younger Bush and found our way back to our cars. Eli was hungry. Of course Dave chose barbecue. We ate barbecue at Goode Co. Armadillo Palace, and of course saw a large, metal armadillo (with horns). I have a thing for jumping pictures. The large metal armadillo seemed the perfect launching point.  And because we had a fifth wheel, Dave, the boys and I were able to jump together. As he looked at all four of us perched on the Armadillo’s ledge, our friend, Doug, pointed at my phone and said,

“Hold the button down, right?”

“Yes. Take as many as you can.” I responded and we jumped.

Then we jumped again. 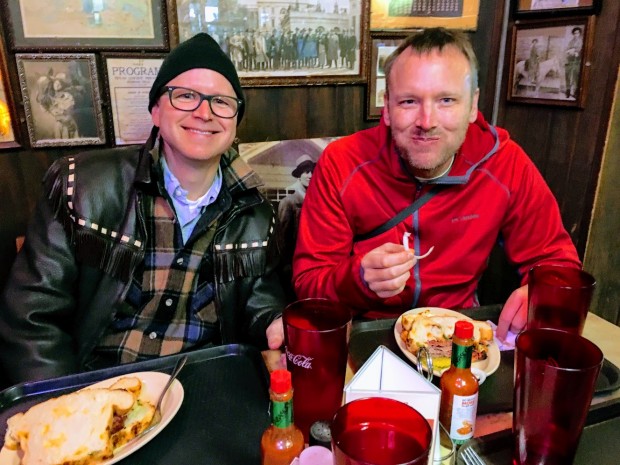 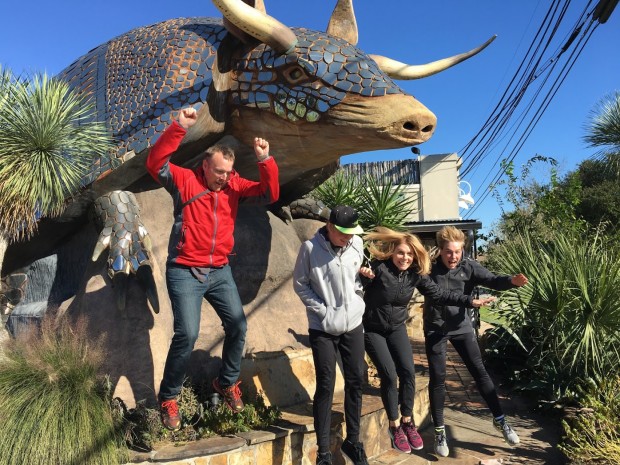 Jumping off of a giant metal armadillo at the Armadillo Palace, Houston, Texas 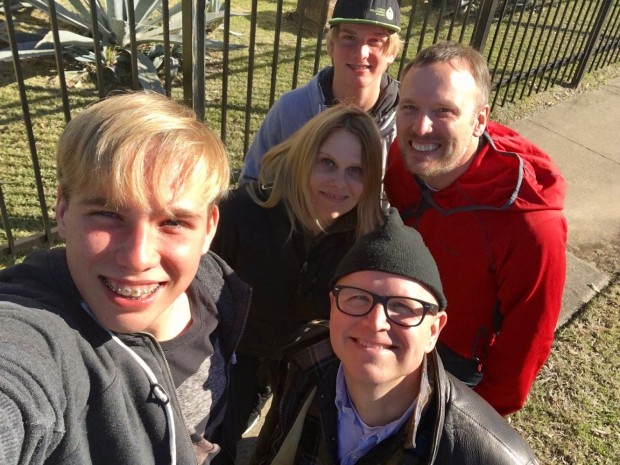 A goodby selfie with our most awesome tour guide, Doug, Houston, Texas

Now at Houston’s Art Car Museum our friend Doug had to go. We requested a group selfie. In every direction, the sun was wrong and fiercely bright. The moment was right so we snapped away. In seconds Doug was gone. That is when decided we would go inside the museum if it was free. It was free.

Inside, the woman at the front told us that they were also having an art exhibit that day.

“There was no jury and we accepted art from the first 100 people who entered. You can see by the work here that Houston has a lot of talent.”

(Ok. Of course there were some pieces of questionable quality. I would argue that those pieces made it even better and the show was a delight.) We walked through the museum. I took pictures of cool art pieces, confusing exhibits, and crazy art cars — all entertaining. Then we met Gary, a man with a ZZ Top beard, wearing a cowboy hat and wearing a grey shirt with the name “Gary” embroidered on it.

“Is your name really Gary?” I asked.

Then Gary told us it would only cost us $30.00 to enter a car in the Art Car Parade. He continued.  “And that includes your entry fee, tickets to the dance, and a t-shirt.”

“Of course it includes a t-shirt.” I said as we laughed.

I asked Gary if I could take a picture with him and Dave. He obliged and stood proud. I took three. 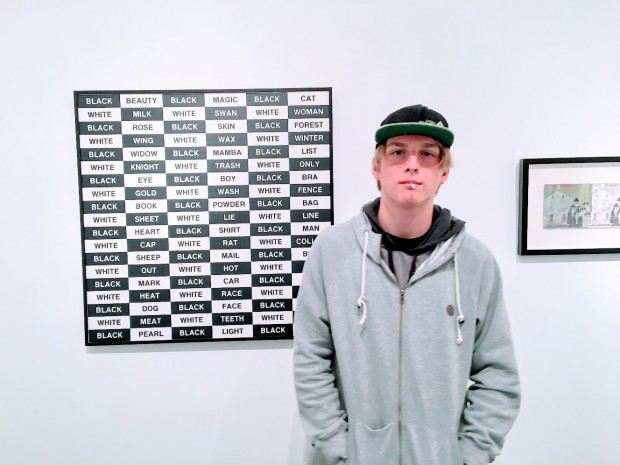 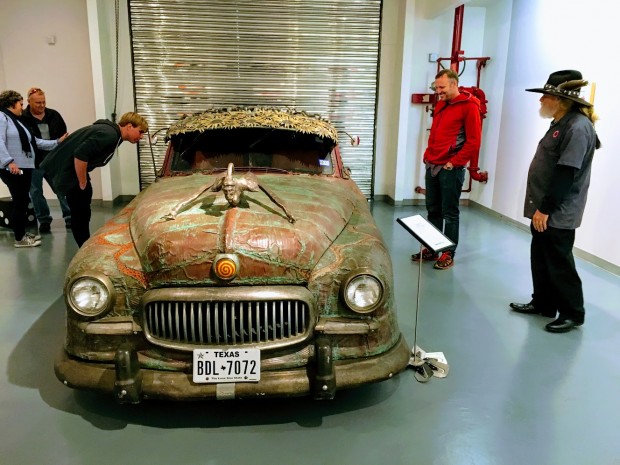 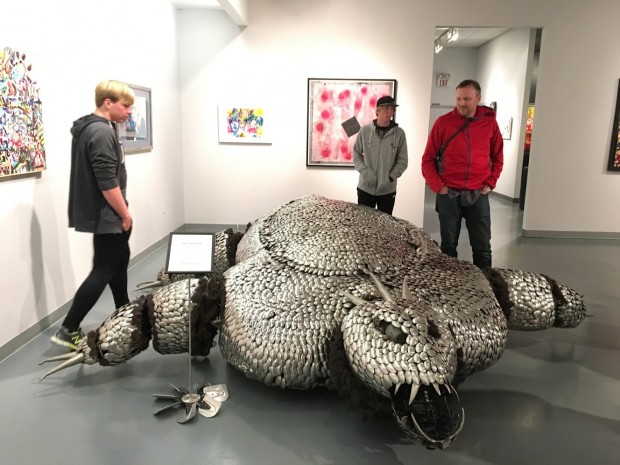 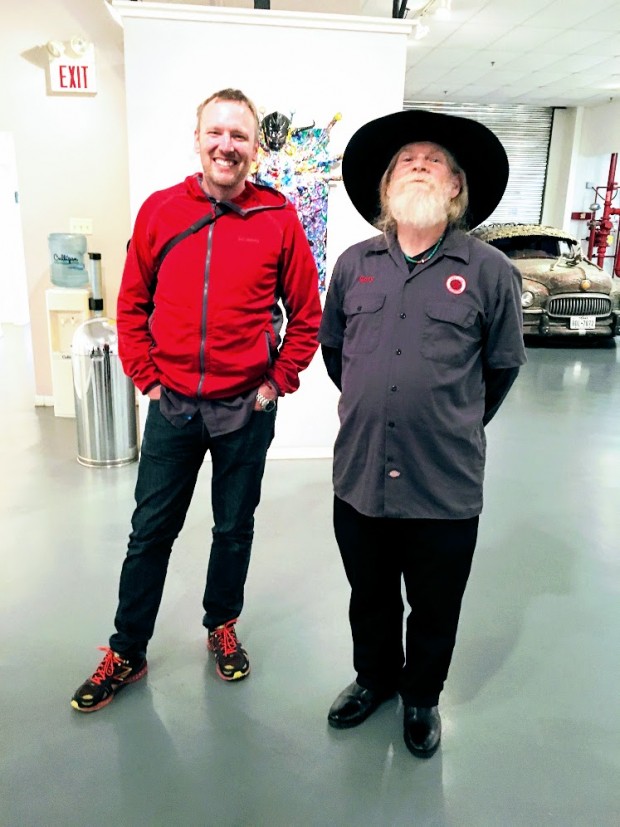 It was time to go. We had a flight to catch. We said goodbye to Gary and were on our way back to the airport, returning our rental car and checking our bags.  We were on the plane. I didn’t mind that Dave was bumped to First Class. The boys and I laughed as we listened to another family of boys argue about whose turn it was to sit by the window. They were persistent. We laughed even harder when we heard their dad insist,

“You now have lost the internet for the rest of the weekend.”

Kyle and I laughed again (empathetically, of course). I felt happy. I was sitting with my boys on each side. We were on our way home. Sure, I knew that I would be hitting the grey Utah winter. My friend, Rita, even texted me, warning me about the bad air. Of course I knew the boys would struggle returning to their routine. (They have.)  I knew Monday would come and I would feel that achy loneliness I feel each day as Dave leaves for work and the boys leave for school. (I did.) Guess what?  I also knew we had this moment. 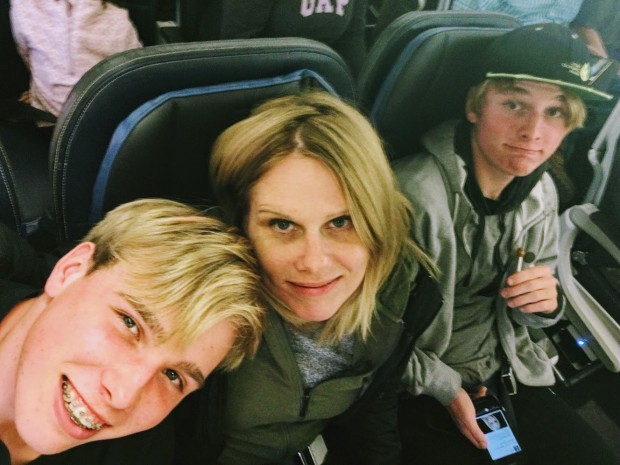 The boys and me flying from Houston, Texas to Salt Lake City, Utah