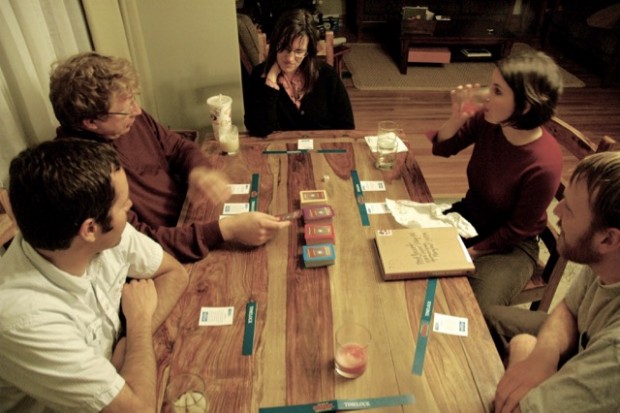 My sister, Dominique, at the head of the table. The book she gave me, “Post Secret,” is on the table. Salt Lake City, Utah

Okay, I am trying to get re-motivated as far as blogging CrazyUs goes. It, (blogging, that is), has become just another everyday and crazy social construct, like working in the corporate world or going to high school, that I find myself trying to negotiate. (Oh, and once I realized that the blog world is just another typical social structure, I began fighting the system so-to-speak. I am cantankerous like that.)

You see, I hate hierarchical structures and I can’t stand having to do certain things to fit in or move ahead, you know what I mean? The minute someone puts me into a box, you will find me trying to claw my way out. But because I am crazy and inconsistent, while clawing my way out, I will also be trying to make the people in the box with me much more comfortable. My case in point: Even though I couldn’t stand how mean the popular girls were in elementary school, I felt sad when they didn’t include me while they practiced their disco dance routines, I was always the kid who sold out and did things like give away candy or test answers just to fit in or move up the social ladder. I know, I am so weak.

Anyway, I digress way more than I intended. I have been thinking about a great book (“Post Secret”) my sister, Dominique, gave me for Christmas, which also has something to do with Kat and Alan’s favorite Sunday Night pastime.

My Question: What is the biggest lie or craziest lie you ever told? I am not talking about secrets here, I am talking FLAT OUT LIES. You can post anonymously if you would like.

Ok, I’ll start with two of my favorite deceptions (not because they are witty deceptions, but because I can’t believe I actually told them).

ONE: When I was eighteen my friend and I used to use fake I.D.’s to get into Williams Pub in Minneapolis. I am sure many of you have done this. Wait, let me correct myself, I am sure many of you know someone [wink wink] who has used a fake I.D. Well, I was one of those people and I thought I was pretty darn cool hanging out with all of those twenty-six year old men. Silly, silly me!

So this one time my friend and I were waiting in the line to get in the club when we approached the doorman/bouncer. He took one look at my fake I.D. he was holding in his gynormous hand and said, “That is not you,” at which my friend, weighing in at about one-hundred pounds, grabbed my fake I.D. back out of this three-hundred pound bouncer’s hand and said, “Um, yes it is her.” Then, with my fake I.D. in hand, we proceeded to walk past this stunned, muscular man into the bar.

TWO: When I was a young girl, about five or six, whenever my little neighbors would come to the door and we didn’t want to play with them, my brother, sister and I would say,

“Bethy, Bill and Dominique are not here.”

To which they would giggle, “You guys are silly. You are Bethy, Bill and Dominique.”

And then I would respond, “No we aren’t. We are Bethy, Bill and Dominique’s twin cousins and we don’t like to play with little girls.”

And then I would shut the door. What an awful thing to do.

Anyway, with all this truthiness, of course I have been thinking about deception. What I hate the most is when people lie to me. Sadly, I always know when they are. I just don’t have the guts to tell them so.

Wait, I thought of one more lie/deception and Dave really wants me to add it. Here goes.

Okay, so my last year of college I was living off campus with my friend Jenae. Jenae had recently shaved her head and I had recently cut my hair very short and dyed it platinum (both very important details to the story). (I’ll find a picture of my Punk Rock Hair and scan it). Anyway, our landlords, I mean slum lords, wanted to rent our tiny basement apartment to four girls. There was barely enough room to walk, let alone share our space with two more people. So we conjured up a plan (mostly I conjured up the plan). When girls came to look at the apartment, Jenae and I would be sure to be present, planting seeds of doubt in these unsuspecting women’s heads. We would do things like intimate that the apartment was way too small for four people, which was TRUE, by the way. The other thing we would do, which I think is the thing that really scared the ladies away, is lead these unsuspecting women to believe that Jenae and I were Lesbians. I mean, Jenae’s head was shaved and I looked all punk rock. Of course we had to be gay, right? I am guessing that being a Lesbian in any other college setting is no big deal, but we knew our audience. We were at [wink], The Lord’s University, Brigham Young University.