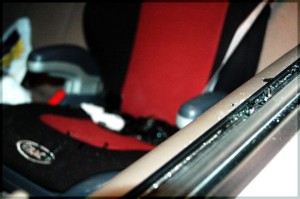 Shattered Glass on our 4Runner

“Of all the windows to break, why did they have to shatter the one next to the car seat?”

“By the time someone feels like they are entitled to break into your car, I don’t think they care or put any thought into whether they get broken glass all over some kid’s car seat.” Dave replied.

Yesterday, as Kyle and I drove away from his school, I noticed that I had missed a call from Dave. I called him twice before he answered and when he did, he asked me,

“I am guessing you are calling because you heard my message.”

“Someone broke into both of our trucks last night and stole all of my tools.”

“Someone broke into our trucks last night and stole my tools.”

“Dave, how could you leave your tools in the car with all that’s been going on?”

“This conversation is over. I am hanging up now.”

I immediately called Dave back and over the next few phone calls, we worked through our frustrations. During the night someone broke into our trucks. Just yesterday Dave had picked up a bunch of DeWalt power tools from the repair shop. There were over $1,000.00 of tools in the trucks and it was as if the robbers somehow knew that those tools would be there.

“I don’t think they did know.” Dave would later say.

I spent the morning at Kyle’s school. It was my volunteer day. Because Kyle’s class was watching a play mid-way through the day, the other two volunteer parents left (one always leaves at 11:00AM) and I was on my own. Ironically, Kyle’s teacher was called into a last-minute meeting as well. The class was supposed to be able to stay in the lunchroom until her meeting was over, but instead the lunch ladies kicked us out. I was on my own with twenty-two kids. “What could we do?” When we got to class, I asked the kids what we should do. One little boy suggested we surprise their teacher. I suggested they clean off their desks and to show me they were done and as I demonstrated, I asked them to put their hands in a funny medatative pose. Kyle, who stayed in the lunchroom to help his friend clean the tables, came in mid-way through our desk cleaning and for the third time that day, he yelled at me.

Luckily one of his classmates coaxed him along our cool, room-cleaing adventure as I sadly thought to myself,

“Are we already here? Have we already arrived at the place where I, the mom, am a public embarrassment to Kyle, the son? I hope not.”

Kyle’s teacher wasn’t back and with all the desks cleaned, I suggested that every kid pick up two things around the room. I reminded them that if they each pick up two things, well, that would be almost fifty things and then the room would probably be clean. They seem excited and after picking up each thing, they eagerly sought me out for some well-deserved praise. As we ran out of things to pick up, I was began to panic a bit. Kyle’s teacher still wasn’t back. Quickly, because you have to be quick with these kids or you will lose them, I asked the kids to gather around the circle area. I asked them if they knew any fun games, and when things started to get crazy, I asked them about spring break. I asked what they were doing and then, knowing that many of the kids were going back to their child care, I asked if any of them were going to “day care” next week.

“Oh, thanks for helping me understand. I won’t say that any more.”

Feeling like and idiot and realizing that I am SO not an elementary school teacher, I shifted gears to safer, more politically correct topics.

I ignored her as I saw the many excited and attentive arms fly up in the air.

They could hardly contain themselves,

I picked the first boy to raise his hand.

“That is correct. Great.”

I continued with about two more math problems, when Kyle’s teacher walked back into the room. I was saved!

From Kyle’s school to Eli’s pre-school Dave and I went back and forth, calling each other (mostly me calling him). Every time I would think of another issue, I would call him back, talk for a minute and hang up.

“If only I knew who stole our stuff. If only I could talk to them. If only they could see how violated we feel.”

It wasn’t until I got home with both boys and went alone to the garage where I saw one of the trucks. Just last week, we got our 4Runner back from the shop. About a month ago, while parked on our street, someone backed into it and smashed the door in. As I stood in the garage I realized that it was the same door. As I looked in the window and saw all the glass piled into the car seat, I think I broke too.

In the last month, someone has broken into our garage and stolen Dave’s high-end mountain bike, the “hit and run” on the 4Runner I just mentioned, and now the tool thefts; a window was punched in on each truck. Dave, of course, called the police and no, they didn’t even bother coming over. The last time they came over, when the bike was stolen, they told me in a very matter-of-fact way that crime is on the rise.

“It seems to rise with all the meth use.” Officer so and so told me as he sat at my dining room table and continued, “The only way we have found to deter these people is with lighting.”

Our street light burnt out just the other day.

There I stood yesterday afternoon in the middle of our street talking to my neighbor, who had his planner and paycheck stolen out of his car the same day that Dave’s bike was stolen. He told me that his checkbook had twenty-five checks left.

“And can you believe they used every one of them? They even wrote a check to the gas company?” He told me.

“Yes and when I talked to the detective, the detective told me that he couldn’t trace the check because it wasn’t over $500.00.”

“So someone can steal your checkbook, pay all their bills with it and there is nothing you can do?”

I walked away from my neighbor, both of us agreeing to get the word out and teasing one another about how we would beat the hell out of these people if we ever see them.

Yesterday, I was crabby and impatient with the boys. I was also very very quiet. I felt like a bad, bad mom. I felt violated. I was mad because I felt like this could have been prevented and I wanted to blame someone. I felt angry about having to deal with insurance companies, glass people, getting bids and having to live with just one car again. I felt selfish, no, very selfish for feeling this way. I have so much and I am guessing the person or people who have been victimizing my family is/are in a much worse place than I am.

With that said, I still can’t let go of this one thought.

“Of all they windows the could have broken, why did they have to break the window next to the car seat? Why?”