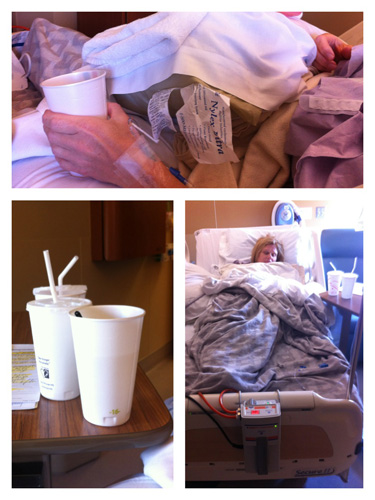 The night before surgery I waited until the very last second to have one more drop of caffeine. I knew we would be up early, I knew my brain would not want to comply and hoping it would last.

At some ungodly hour (6:30 AM) Dave and I arrived at the hospital. It was so early that we dropped our showered-and-ready-for-school boys with their Frosted Mini Wheats, Rasin Bran and backpacks in hand at my most awesome friend’s house. She, unlike me, had already been up for about an hour, drinking her coffee and reading the newspaper. She welcomed the boys, we asked them to be very quiet because her boys were still asleep, they ran into the tv room while she gave me a hug and told me all would be well, and then we were on our way.

We checked in and were immediately ushered into a tiny hospital room. While Dave tapped away on his iPhone, the nurse, who seemed way too serious and very conservative, handed me my plastic-wrapped Bairpaws Hospital gown with accompanying directions (good thing), asked me a bunch of questions and left the room. Even before she left, Dave and I were already joking about all the ports on the hospital gown and realized that if needed, they could even attach a heater hose to one of the ports. “That’s pretty cool.” Dave laughed. Except for my ugly, new and utilitarian brown hospital socks, I took every last bit of clothing and forgotten jewelry off. As I disrobed, Dave opened the package, pulled out the gown and helped me put on my papery-plastic-porthole-covered lavender gown. 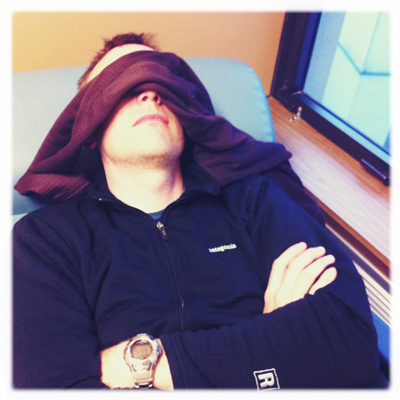 Big Daddy waiting for me to go into Pre-Op

Seconds later he was sitting in a corner chair with his black light-weight Patagonia jacket covering his eye. I wished I were him. Instead I called and checked in with the boys. They were cracking jokes. And this is the text I sent them with the accompanying picture, “Hi Kyle and Eli. Notice Dad?” 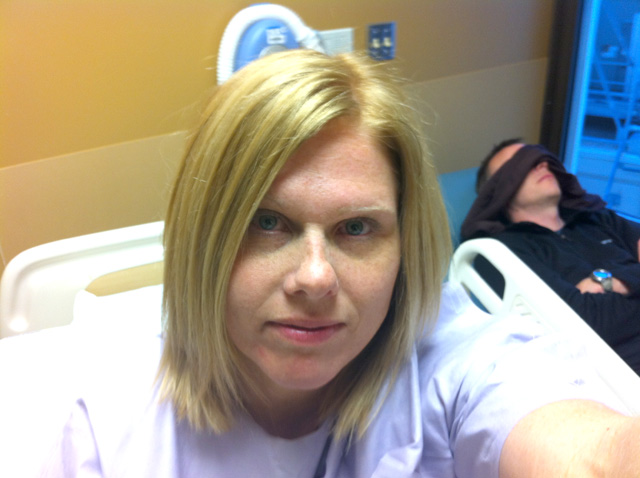 Picture that accompanied my text

To which my friend responded, “Eli says he is not surprised to see his dad in that position.” 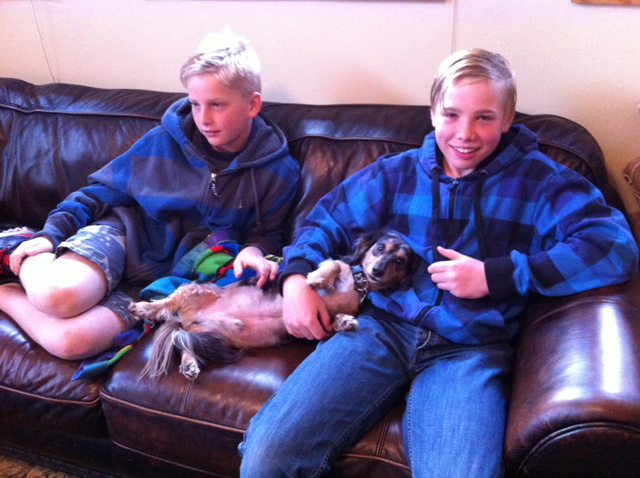 Kyle, Eli and their new friend

And of course this text was followed moments later with a picture of Kyle and Eli, “Dear Mom, we want a dog.”

Somewhere in there as the clock ticked and Dave began to snore, our texts digressed. Somehow I found my friend indulging my pre-surgery mind set, “Park City doctor friend just came to say hello and I have no underwear on. Crazy!” To which she responded with a picture of my boys and her boys in the car, on their way to school and these words, “Everybody’s farting.” (I needed this distraction. I needed to know my boys were ok and I needed to make really inappropriate observations.)

Moments after I knew my boys were safely at school another person came and wheeled me into pre-op. They inserted the IV and I immediately had to pee. They unhooked the IV and I walked over to the bathroom. Dave sat there waiting when my doctor, this most-awesome older Czech woman, walked up. We joked. We got serious. We talked about surgery. We talked about my fears. She left.  The anesthesiologist came in with a nurse. We talked some more. Thank God my anesthesiologist friend, who also works at this hospital, prepped everyone for me and my concerns.

As I kissed and said goodbye to Dave, they wheeled me about five feet (literally) into the sunny operating room. [foreshadowing] Just as I was about to go under I blurted, “You know, it is allergy season and sometimes I have a hard time breathing.” “Good to know. We’ll have a breathing treatment ready when you wake up.” The doctor responded.

I didn’t even need to count backwards or think of sheep or anything. I was out cold and out cold fast…

“Stridor! Stridor! She can’t breathe!” I heard the screams. I heard them faintly like they were coming from miles away. In and out I went.

“Stridor!” I opened my eyes for another second. There were so many people standing around me. I was afraid and I did not know I could not breathe.

The next time I heard the word “stridor,” I was holding tightly to the nurse’s hand; so tightly I thought I might squeeze her hand off. I looked at her and because she was watching me closely, when she saw me open my eyes, she said, “You sure gave us a scare! You had Stridor.”

My throat was throbbing and I was glad to be awake. I looked around at the sleeping patients in the Recovery Room. No one was standing around them. No one was holding their hand. I was freaked out and dazed as she explained what had happend. When they pulled the breathing tube out, I could not pass air through my throat. Luckily I had mentioned allergies because they were prepared. Luckily I would be ok. “People die from post-operative Stridor or we have to give them a Tracheotomy. You are lucky.” I felt lucky and was not ready to let go.

I did the recovering I needed in the recovery room. I thought it was super cool when my doctor showed me a picture on her iPhone of my diseased gallbladder (I had asked her to take one) and I was glad to be back with Dave and back in the room where we started. We waited and waited and were finally able to go. My surgery was the easy part. It only took twenty minutes.

It was warm. It was bright and we were ok. I wasn’t ready to go home. I was not ready to eat a hamburger either. (My doctor told me that she has had patients who leave the hospital after gallbladder removal and head straight for McDonalds.) “That is crazy crackers.” I told Dave. “Let’s just go to Jamba Juice. I am really craving a smoothy.” We went over, had our juice, took a walk and went home.

Another dear friend had taken Eli after school and when it was time to come home, she picked Kyle up at the bus stop on the way. I could see the relief as the boys saw me and saw that I would be ok. The pain was not bad the first day. I always forget how long the IV pain meds last.