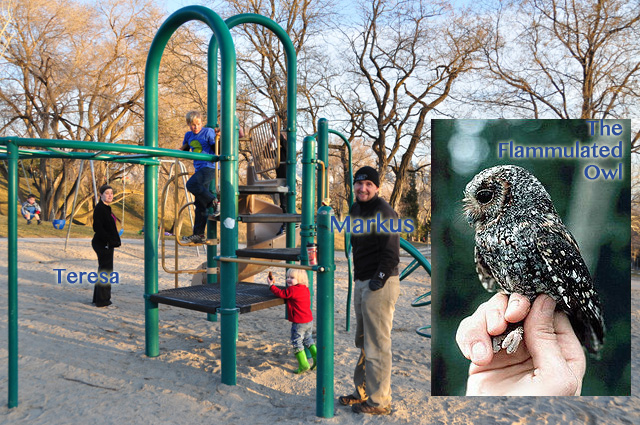 At the park with Markus, Teresa and little S. with the Flammulated Owl.

There we were, with our friend, Markus. He had driven up from Salt Lake City and was looking for a good Flammulated Owl calling spot. He thought the trails behind our house would work well. He began to explain, “I took a group here last year. It was late in the season so it was hard to hear the owls. There were at least forty-five people. And because there were, there were too many voices to hear the sounds. This year I kept it at twenty.”

Markus arrived first and once Dave was home, our owl adventure started with a hike before sunset. We walked up the trail and when Markus found a good spot, he logged it in on his handheld GPS. Moments later while Markus, Dave and Kyle were looking for the perfect amount of dead aspens, combined with live and thick trunked aspens combined with enough openness, I noticed that Eli was not feeling well. He was barely hanging in and about every seventeen steps from his pale face and raspy voice I heard these words,

“MOM, I am dying of thirst. I cannot breathe. I cannot walk another step.”

We coaxed Eli along and listened while Markus talked owls. Dave was more compassionate than I and let Eli stop and wait as we walked on. Personally, I think (know) I was paranoid to leave Eli alone. Come on, a moose may get him or a rogue mountain biker, or, perhaps a bobcat? We live in the mountains, people!

This week Markus is speaking at our local Nature Center and wanted to be prepared. “I want to have a few spots where I can call.” I could tell as Kyle listened to Markus that he was also formulating. Finally and after we hiked down the steep terrain of a side trail he said, “Markus, I would really like to help you Thursday. Do you think that would be ok?”

I already knew it would be. See, Markus and Kyle have this super strong, Superglue-type connection. When Kyle was sick with Stevens-Johnson Syndrome Markus was there. Markus was always there for Kyle. He came nearly every day. If he could not make it, he would always call Kyle. One night he even brought us a pizza. Here’s what happened. I could not leave the hospital. Dave was home with Eli and Kyle wanted a good pizza, “not one of those awful hospital pizzas,” Kyle sadly suggested. I did what a desperate and modern woman would do. I posted a request on Facebook. “Kyle really needs a pizza. Is there anyone out there willing to bring him one?” I never did it before and have not done it since, but am convinced posting this very request on Facebook was the right thing to do. Of course I posted this request because I did not feel like I could ask Markus for one more piece of his precious time. Teresa (Markus’s wife & also our very good friend) and their son, Sammy, happened to be living in Las Vegas at the time so Teresa could finish her doctorate while Markus, who had just accepted a new job, was living alone in SLC. Teresa, upon reading my request, immediately call and then texted Markus something like this: Markus, you need to bring Kyle a pizza now!

Moments later my phone rang. “I hear you need a pizza?” The person on the other end said. “You heard correctly.” I responded and a very short time later Markus arrived at the hospital with an awesome Este Pizza in hand. Thank you Mika family!

So when Kyle asked Markus if he could help him with his owl presentation, I knew Markus would find a way. “Kyle, of course you can come. I would love it!”

Markus had found enough calling spots and we made our way back down the mountain. We settled Eli and hours later when the sky was dark and the air was cold, Markus, Kyle and I hiked through our back yard. We stopped and decided it would be a good place to call. We weren’t that far from the house, and from out of Eli’s window, we heard a, “Hello? I hear you guys.” To which I responded, “Is that what your owl sounds like, Markus?” “Hello. Hello.” Eli continued. “Hi Eli!” we all said. (I love that kid!) Eli went back to sleep and we continued on, up past our tree house and off to the right over Dave’s homemade, left-over-dark-brown-wood-patterned-Trex bridge. We walked on. “Isn’t this one of your spots?” I asked.

“Yes. Let’s give it a try,” Markus said as he pulled out his GPS and looked up the owl-calling coordinates.

We stood silently in the very dark night and before Markus turned on his owl sound recorder, we heard them. One hoo-ing to the right and one to the left. “Let’s see if we can get them to come any closer. Do you hear them? Do you hear the sound they make?” The sound our owl was making was the one he makes when he feels threatened, a small sound followed by a hoo.

I thought the owl was far away on the other side of the yard, when Markus, who by now, was foraging through the crazy brush said, “He is really close. Really close.”

Markus shined his bright flashlight, adjusted his owl sounds and climbed through the brush. “Be careful,” I urged, “There is a waterless creek bed just below you. Kyle followed Markus, but first waited to make sure I made it through the brush. We listened and listened. Markus shined his flashlight up and down the trees. We heard our owl and listened some more. Markus adjusted the sound and played more owl recordings. We listened and shined the flashlight some more. “He really is close. Their voice carries so far. Do you hear how deep it is?” We heard the owl. He was strong and he continued, “hooah hoo hooah hoo.”

Finally, it was Kyle who said, “I think he is a little to the right. See. He’s in those aspen trees.” Markus shined his flashlight high, played some sounds, we looked and we could not see the owl. “I hear him. I hear him. He has to be close.” Markus insisted as Kyle and I were swept away in his owl passion.

We turned off all of our lights. Quietly we listened. Our owl was responding to the recorded sounds, “Hooah hoo. Hooah hoo.” “He makes these sounds when he feels threatened. It’s not the hoo hoo, but a little sound before the hoo. Do you hear it?” It was invigorating listening to Markus explain. We could hear it.

“Markus, shine your light lower. Shine it on that tree. I think it’s there.” Kyle suggested.

Markus shined his flashlight half way down the aspen tree. There, on the tiniest broken branch, was our Flammulated Owl. They saw him before me. “Do you see him? Do see him there?” They both whisper-shouted with glee. I didn’t see him. Kyle grabbed my hand and we walked a little closer. Markus pointed his flashlight directly at him. There he was. I only wish Dave and Eli were there to see him too. He was tiny and his feathers appeared light. I saw his adorable big eyes and heard his enormous sound. “He is so cute.” I couldn’t help myself. He was so darn cute. “Now do you see why I love my job? I have the best job ever!” Markus exclaimed in delight. Then he held his flashlight while I took camera phone pictures. I would have brought my camera, but I did not believe. I did not believe we would see this beautiful little bird. 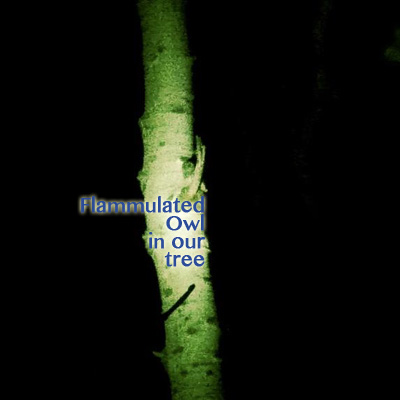 Flammulated Owl in our Aspen Tree

As we walked back to the house we were all pumped up and talking. “You do have the coolest job ever,” Kyle and I both insisted. As we approached the house, instead of going in through the garage we went in through our front door. Kyle slipped in and I stood there thinking about that tiny bird. Markus waited and I started thinking about size. I am not very tall and if I were an owl I probably would be small like this tiny owl. For some reason this little owl reminded me of the times I have had to stand up for my own children. I know. Weird. I started telling Markus about having to go to bat for Eli recently and how scary it was. “The dude was big and tall. As he got up in my face, I told him no. I was the only thing that stood between the kids and this man. What is it with people using their size to intimidate others? It really bothers me!”

Yes, a metaphor, and yes, a metaphor that I really needed. I needed to be reminded that I may be small (whether literally or figuratively), but I can be mighty. It is all in how I use my voice. Will my voice stand on its own? Will it carry far? Will I be able to stand strong? It has never been easy to stand up for myself. Usually when confronted by something scary or uncomfortable I say something inane or fall into several shameful pieces. This little Flammulated Owl reminded me that when I do use my voice, even the big birds will back off and they may even fly away! 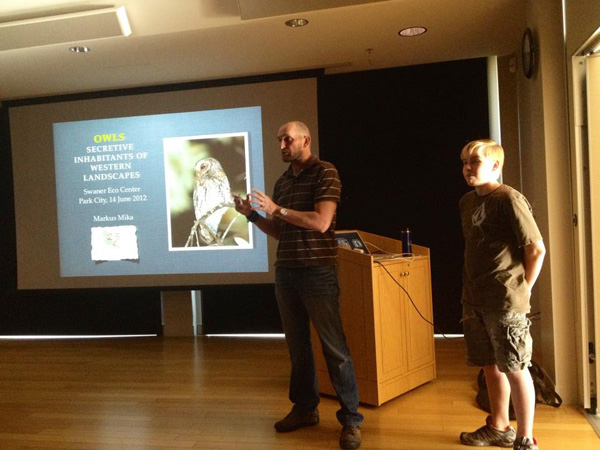