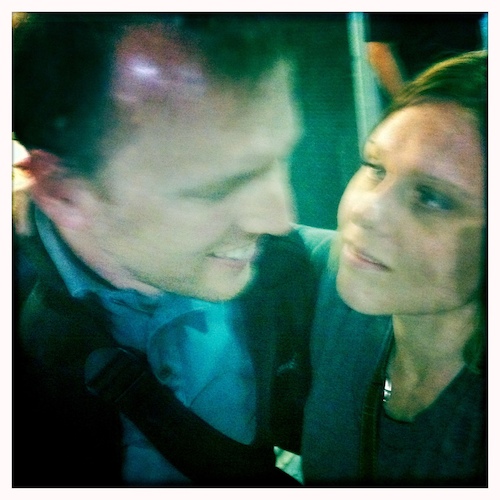 Standing at the brand new park near our home, the evening was the kind of Autumn chilly I love. It was just cold enough for me to zip my hoody all the way and wear a favorite hat (kind of an aqua blue with a grey pom-pom on top). I promised Eli we could go to the park if he finished his homework. Dave was leaving for San Francisco the next day and had a million things to do beforehand.

It was already dark when Eli finished his homework and I heard him from the other room exclaim, “Dad, I am finished. Let’s go!”

“Eli, I’ll throw the football outside with you for a few minutes.” In my mind I wanted to hit pause putting both Dave and Eli in suspended-animation. During this time-stopped moment, I would run over and fill Dave in about the promise I had made. Oh life, where is your pause button when I need it?

Instead and because I felt Eli’s temperature rising, before a complete melt down ensured, I said, “Hey guys, let’s go. Dave you can stay home if you want, but I promised.”

“You can stay home, but I want to follow through.” I said as I rushed the boys first to put on their pajamas (track shorts and an old t-shirt) and then out the door. “Don’t forget your sweatshirts. It is cold.” The boys, indulging me, assured they had them and also assured, “Mom, really? It is not cold.”

Once at the park, I left the boys and Dave (yes, and yay! he came) to play Frisbee (with their brand new Frisbee) in the brand new soccer/lacrosse field while I started to walk the long circle that outlined the field. I had no idea how they could see the Frisbee clearly enough to not get smacked in the face. On my second lap, Dave joined me. We could hear the boys screaming in the darkness and knew they had made it over to the playground. “Mom, can you see us swinging? It’s crazy! If we jump off we fly right into this big pole.” Sure enough, Dave and I made our way through wood chips and playground equipment to see the boys swinging hard. “Mom, look. See the pole?” Kyle said as he swung higher and higher. “Mom, you have to watch this. Watch.” All of a sudden Kyle was airborne and flew right into the pole thankfully with his hands outstretched. The pole was indeed large and also unprotected. The park is new and knowing this Dave and I both uttered, “Poor planning. They are going to have to do something about that.” And then I continued as I often do, “As soon as some kid gets brain damage, you know they will.”

The boys were having a blast so Dave and I continued our chilly, dark evening walk-talk. It has been a hard few days. Between Dave’s frequent business trips, the new and long daily school commute, PMS, a combo sinus infection/double ear infection, I have been off. I mean, crazy off. I sound whiny. I know. Usually I can swim away all of life’s sharks and rise above my own insecurities. I just wasn’t cutting it and felt like I was starting to sink. I don’t know if it was the PMS or the nasty cold, but something definitely shoved me off center. Petty issues were turning into giant monsters and as soon as I would pick myself up or take a deep breath, something small would grab my ankle and knock me over again. And because I was feeling discouraged from feeling knocked down, even smaller things were grabbing my attention. Dave and I walked and talked. I whined. I finally said, “Why does everyone have to be so dumb? Why are some of the most annoying, cruel and undeserving people the most successful? Why do people who work hard and long get screwed? Why do people our age still care about being cool or popular? Blah blah blah I am feeling sorry for myself!”

Dave responded with some harsh words or really what I felt like were harsh words, and I felt worse.

As I walked and fumed I thought to myself, “I know Dave doesn’t mean it. He has my back. I know he does.” Then I thought about what he told me the other day when something else was bugging me, “Even if you do not care to be a part of the group, no one likes to be actively excluded.” I know Dave gets my pain. I knew he understood I was feeling blue. Why the harsh words? In that second I got it. I re-grouped and realized he was just trying to help me SNAP OUT OF IT!

“Hey Dave, I am sorry. I don’t think I am expressing myself well. I feel bad because in this moment I feel alone. I think some people are really lame and I do not understand why things happen they way they do.”

It really didn’t matter what I was complaining about because I was. Dave got it and after I told him I didn’t think I was expressing myself well, then backed up and slowed down, he began sharing how he understands. He explained the pitfalls, ups and unfair aspects of his chosen path. “It doesn’t make sense.” He responded.

It does to me. It is about empathy.

Struggling to climb up for air, all I needed was some genuine I-know-how-you-feel feelings. It is much easier to swim past the sharks when someone is there holding your hand. It is even easier when you are in a life boat together and that they totally get why you need to stay afloat.

Our conversation continued, we were in the car, had found the lost soccer ball (twice), the new Frisbee made it too (thankfully) and were on our way home. Dave cracked me up because when I told him how much it meant that he empathized he informed me that he felt his advice was useless and that his words had merely been selfish: “All I did is tell you the bad things that happened to me.” And then Eli jumped in, “Empathy? Empathy? What does that even mean?” I am not sure he really cared as much as he wanted to be a part so we told him, “It is kind of like sympathy, except you have experience that same or similar things yourself.” “Oh.” He responded.

We were home walking our trash cans to the curb. I brought up our conversation.
“Dave. I am so glad you said what you said. I loved it. You told me things that reminded me that you get it and that I am not alone. You see, my friend, it is much easier floating on a raft with you than all alone. At least when you die, I have you there to eat you so I will not starve.” I shared.

And then Dave added, “Really you need to eat me before I die when I am nice and healthy. If you don’t the meat will go bad and you will starve too.”