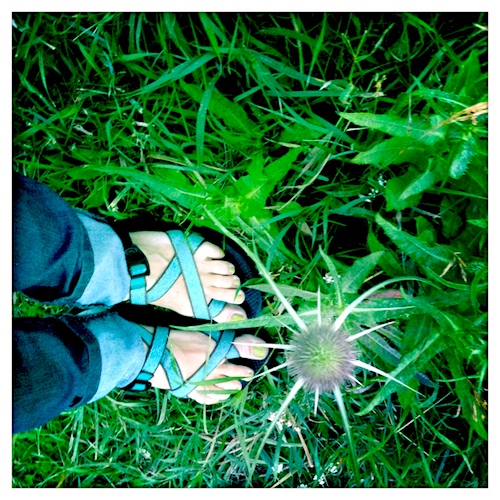 Maybe it is because I am just old enough to remember the Energy Crisis of 1979, and the heart-pounding-sweaty-palms anxiety I, even as a young girl, felt each day that we might run out. I remember the crazy-long gas lines, counting our pennies, and the stress of watching my parents try to figure out how they were going to pay for all that gasoline.

And yes, I was completely freaked out with our world.  Each time someone left the light on, for instance, I felt that end-of-the-world-as-we-know-it-crazy-zombies-are-going-get-me fear as my dad yelled, “Turn off the lights! We are paying for that,” then mumbling something about the exact cost we paid to turn the lights on and then off again. “Be careful. Turn the light off when you leave the room. Don’t keep flipping the switches. We pay for that!”  (If my boys are reading this they will now know why I lose my mind every time we leave the house with lights left on.) We always turned off all the lights, left only necessary lights on, turned down the heat, and like the wrath we incurred for a light left on, if someone forgot to turn the when-you-are-asleep-heat to what felt like frost-producing 32 degrees Fahrenheit, there was hell to pay.  Our thermostat was marked with little dots to remind us where the temperature should be set, and each time I bumped it too high, because I was so cold, I wondered if I was using up the heat of my future.  Scary is correct.

By 1979 I believe my parents were scared too. They lived through the 1973 Energy Crisis, and remembered what it was like to restrict and go without. I, myself, sensed we were entering a more Bladerunner-Mad-Max (not the one with Tina Turner)-Post-Apocalyptic-Dystopian world.  In 1979 I also felt completely blessed that we were one of those “weird” religious families; you know the ones. We had our seventy-two hour kits, knew how to garden, sew, wear dresses (homemade Gunnie Sax, to be exact) that looked like we were from “Little House on the Prairie,” look like we could live in a little house on the prairie, and had plenty of food stored up: a two year supply, in fact. Folks now, like Doomsday Preppers, are simply the modern-day heirs to our empire. We knew how to save, and we knew how to be ready for the end of the world. When the wealthy lady at church referred to my family as the family who would survive the Apocalypse, I mean, The Second Coming, I took it as a complement, even though now I am sure she was drawing attention to the fact that our clothes were not from Laura Ashley, but sewn with my mom’s loving hands.

Her words: “You guys would be totally okay during the end of the world. You know how to sew, and you could to teach the rest of us how to take care of ourselves.” Except for her sewing comment, (my mom and my sisters are the ones who really know how to sew), like I mentioned, I was flattered. In my mind I imagined us as a scrappy, adept, badass family, because we actually were. When the world came to an end, we could use the bumps and bruises life threw our way and we would be Mad Max and Laura Ingalls, all wrapped in one.  To paint a clear picture, because I already illuminated the Lauara Ingalls side, we were also the gypsy family, a family who traveled around in our camper, singing our hearts out to the overly played cassette tapes of  Elton John,  Simon and Garfunkel, and Roberta Flack, we did not own a gun, were saving our money to buy a personal computer when owning a calculator was cool, watched MTV on our TV, and knew that Led Zeppelin was not a person, but a band. Better, in today’s world, in my duct-taped together, family, I would hope to be Katniss, an expert with a crossbow, and alongside my attractive-outlier companion we would save the world, Hunger Games style.

Alas, I am not Katniss. I am a stay at home mom; a mom who is filled to the brim with pre-existing conditions, and have a husband who has chosen a career path which often leads us down the path of the self-insured.  Guess what? In the pre-Obamacare world it has not been easy for us to get health insurance, at any price. It has always been costly, chock full of high deductibles, high premiums, exclusions, and surcharges. Today, my hands feel tied, and because they do, maybe the fear I feel now is that I can clearly remember what it felt like to live in a country — a country that is supposed to be the greatest country on the planet — that wasn’t living up to its own expectations.

Now that I am thinking about 1979, of course I think about the Iran Hostage Crisis of that same year.  I still believe that whole thing could have been avoided if not for political posturing and grandstanding on both sides, don’t you? Ironically, because I am trying to draw a parallel to this time in history and today, the western media called it, “an entanglement of vengeance and mutual incomprehension.”  Sound familiar?

As a young girl I remember those long and sad days vividly. It is not hard to do.  We were cold. Remember? We kept the heat down low. The lights were off, of course. It was barely pre-MTV, we did not have fifty billion television stations, and an assortment of electronic devices to distract us. We had a television set, a phone with a very stretched out cord attached to the wall (obviously because we had to stretch the chord all the way down the stairs behind a closed door so we could privately talk to our friends), and most of us did not have a T.V. remote.  When we wanted to change the channel we had to get up off our ass, walk over to the television, grab that little knob and turn it. For 444 days we turned our television sets on, and heard about those fifty-two American hostages. In my overly-simplified version of world history and politics, it was my understanding back in 1979 that the United States did not need to be where it was. It is my understanding that the Oil Crisis of 1973, which was caused when members of the Organization of Arab Petroleum Exporting Countries proclaimed an oil embargo forcing prices of oil to skyrocket, should have taught us something.  So by 1979, when another Gas Crisis, prompted by the Iranian Revolution, happened, the United States should have known better, right? My guess is that they did, and my guess is that because one political decision led to another, we ended up in crisis anyway. Kind of like how the fifty-two American Hostages were not freed until the moment Ronald Reagan finished his inaugural speech on January 20, 1981. True story.

Earlier this evening, while at the grocery store, I discussed with my friend, (we were standing by the yummy smelling grapefruits, our hands cupped around our mouths as we spoke in whispers), “It is not the same now as it was then (referring to the 1979 Energy Crisis). I know I can buy gasoline, there are no long lines, I have all these great LED lights, and of course I do not feel like the world is going to end this very second. I am still completely freaked out. I feel like we our government is completely falling apart, we just get to sit back and watch. The scariest part for me is that I believe that once again they know better, but their pride, greed, righteousness, and grandstanding, making this government shutdown happen.  We are the collateral damage.”

I grabbed two grapefruits, set them in my basket, and was on my way.

I wonder if any of us parents remember anything? Do any of these politicians?  Have we forgotten the long gas lines, cold winter houses with heat turned down low, fifty-two American Hostages, or any of our nation’s past less-than-ideals. I wonder if we, when we are debating Obamacare, if we remember that Medicare was supposed to be a nation-destroying Socialist encroachment back when it was passed? I wonder if we know that most of the Affordable Care Act was actually hatched in Republican think tanks back in the 90s? Sure, if the Republicans had passed their healthcare reform, it would most likely NOT include free birth control, but it would have more similarities than differences to Obamacare. It’s a mess, and we got ourselves here.  I wonder how this will stop. I wonder in this land of the free home of the brave if we can ever figure out a way to get along, listen and instead of being self-serving our self interested, that our government can actually just work it out.

On the way to school this morning the boys were mad, and yes, it was the other one’s fault. I asked them to stop talking. “You are tired, I am tired, we are not being nice, so let’s shut up. Seriously, shut your mouths.” After a few minutes, when we were all thinking of other things, I turned on the radio. Of course the people on the air were talking about the government shut down.  The boys and I talked and then I said, “Boys, listen. This is a big deal. Just like I experienced both the Iran Hostage Crisis and the oil crisis way back when, this political showdown will be a moment for you. Remember it. Learn from it. Think about how we can make it better.”