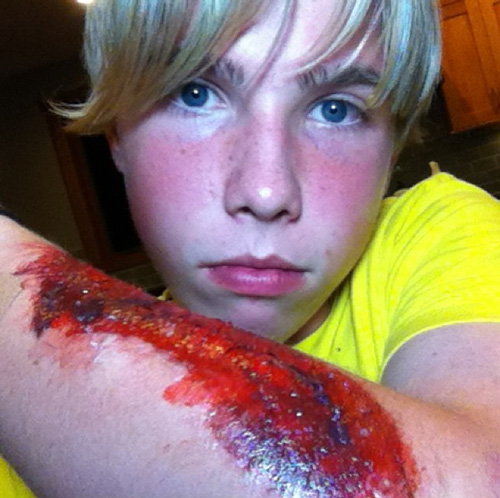 As Kyle covers his arm in “Stage Makeup”:  various colored Sharpies, Dollar Store watercolors, toilet paper, and Mod Podge, he begins to explain the wonders of this great glue.

“Mom, it is crazy! I cover my arm with Mod Podge, let it dry, then do all of this stuff to my arm using paint, tissue paper, Sharpies, and whatever else I can find (and by whatever else he can find Kyle literally means, “If I think a discarded Band-Aid, an apple slice or a single staple would add to the whole effect, I will incorporate all of them.”)

He continues, “Then, after it all dries, I apply another coat of Mod Podge.  See,” he says while pointing at the horrific wound he just created, resisting the urge to pull it off, “I can just pull it right off. Mom, this stuff is awesome!”

“Kyle it is!” I quickly exclaim as I study his amazing masterpiece, and I continue, not before letting him know how utterly fantastic his work of art really is. “Kyle, your arm rocks! It looks so real.”

“Right?” He answers followed by an, “I can’t wait to post a picture for my friends to see. I wonder how long it will take for them to figure out that it is not real. And Eli, please do not tell!”

Eli laughs, “When are you going to tell them?”

“Tomorrow. I will tell the tomorrow.” He did not tell them tomorrow. The next day a few of his friends figured it out. Go friends!

Before Kyle and now Eli run off to post an Instagram photo (ok, yes, my boys are on Instagram, yes, we insist both of their accounts are private, and yes, we have the password), well, before they can escape, I feel the need to give a little Mod Podge History, because who wouldn’t?

“Kyle, I cannot believe what you did with Mod Podge. Really.” I exclaim.

“Mom, I learned it in Art. We do it all the time.” Kyle responded as Eli snuck away. 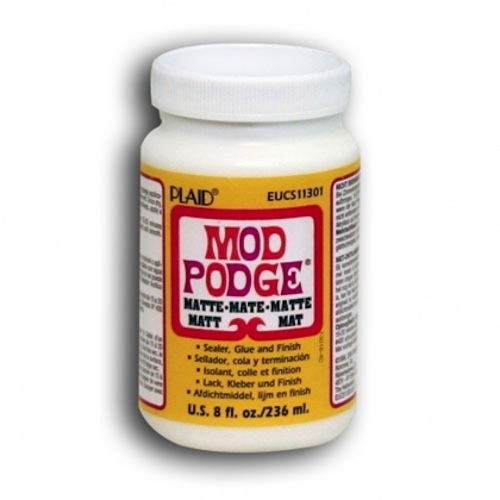 And by,  “all the time,” I am not sure if he meant that he used Mod Podge to fill the dead spaces or that his teacher is actually teaching the class about stage make-up. I tried to find out, and what I inferred is that Mod Podge creations are something to do to kill time. Nevertheless, Kyle is using his Mod-Podge skills in art class, and I really cannot think of a better place or better way to create. Go Kyle!

We were engaged, in conversation that is, which was awesome considering that I have both a tween and a teen (kids these days [wink, wink]), and also considering what happened earlier this week. See, Eli had to be at school an hour and a half early for play practice. (I know. I think it is nuts too). Anyway, the first day after dropping Eli off, Kyle and I went to breakfast, were very tired, did not have a lot to say, and were eventually distracted by our phones (yes, both of my boys also have phones. Judge or don’t judge. Both boys go to schools far away, and I worry, or that is the answer I give myself).

The next day when Eli told us he had early play practice again, I jokingly said, “Eli, you are really going to do that to us?  We go to breakfast and have nothing to say to each other? Teenagers! Well, if you are going to go to play practice please, please prepare note cards filled with questions we can ask each other.

”Kyle joined in and said, “Yes, Eli. We need conversations starters. I do not have anything to say to Mom.”

“Well, what would I write?” Eli played along.

“You could make various cards with questions like what is your favorite color?” I said.

We couldn’t keep a straight face, and also realized that as the boys get older, and their friends and phones seem way more interesting, sometimes this mom has to dig deep to make a connection.

Back in the kitchen with Eli long gone, and Kyle appearing interested (at least entertaining his crazy mom) in the origins of this amazing glue I said,  “You see, Kyle, in my mind Mod Podge has always been used for lady-craft things, and in my mind Mod Podge has a long and glorious history starting with the lady at church; the lady who made what seemed like billions of plaster plaques, using her various plaster molds, to which she would affix an inspirational quote or family photo to with that same glorious Mod Podge.”

We both laughed as I explained, “She moved from plaster-molded-plaques to pre-cut wood plaques, and then everyone at church (like the Cake Pop or put-a-bird-on-it-and-call-it-art trends of today) seemed obsessed, making those same Mod-Podge-covered-Plaques, each plaque more glorious then the previous. It was a movement. And what I think is really interesting is that Mod Podge went from the stuff you use to affix and protect your Spiritual Plagues to being the main ingredient for your Monster Makeup.  Very cool.”

“Yes, it is.” Kyle concurred, and now more eager to take his crazy-scary-wound pictures, we both agreed that our Mod-Podge-History deserved a CrazyUs post, he was on his way only  after saying, “Mom, will you write about Mod Podge,” both laughing more, “I think you should.” 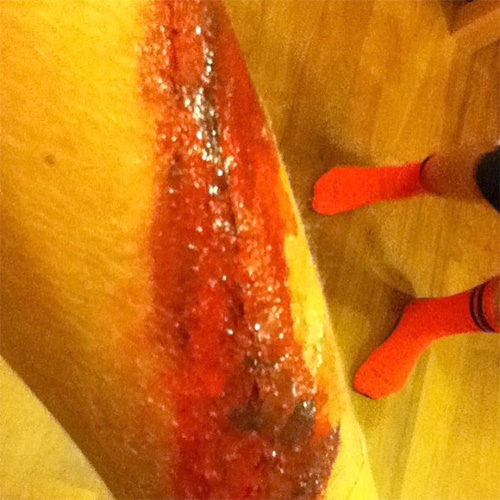 So here I am, fulfilling a promise to my son.  I’ve already told you most of it.  Mod Podge is awesome. That is the most important thing. It has been around since 1967, and has roots in Decoupage, which is the of decorating an object by gluing colored paper cutouts onto it in combination with special paint effects, gold leaf and so on, (thank you Wikipedia), and the decoupage technique has been around for hundreds of years.  Don’t worry, I have no intentions of presenting you with a complete Mod Podge research paper, even though it could be quite interesting [wink wink]. What I will tell you that you probably already know is that basically Mod Podge is glue, yet not Elmer’s Glue. It has special properties because it is both a glue and a sealer, and apparently a key ingredient for stage make-up, at least Kyle’s brand. I could get all kitchy here end with a lovely glue metaphor, telling you how time, experience, love, creativity, family are what really stick us all together, but I will spare you that.

Instead, I am stuck. Literally, I cannot figure out how to end except to tell you that now all I can think about is Macramé. Thank you late 1970’s-early1980’s crafts. Etsy, you have no idea what you are missing, wait, or do you?