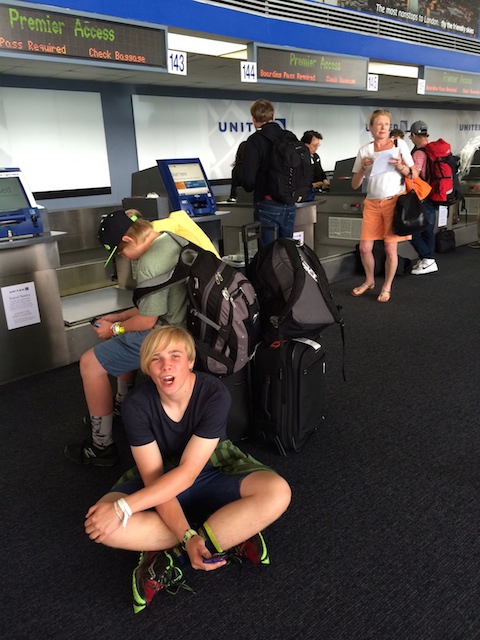 What we will miss:

And about today, it is not over, and we are about to board another plane.

Next Morning, which is this morning:

I tried and I tried and I tried to post the post from Newerk. Alas, I could not, so here it is from Los Angeles.
Today is a new day. After twenty-four hours of travel, at midnight, we arrived at our hotel. Sure, once we arrived they had lost our reservation. After watching Eli pass out on the hotel couch, Brian, the front desk guy, took pity on us.  In on fell swoop, and a few calls, the hotel went from full to one room left.  High fives to that! Dave was up at 3:45 AM for his 6:00 AM flight, and is already back in San Francisco. And from our Los Angeles hotel room I am already knocking away at all the things we missed while we were away. It is nice to be back in the United States. Sure, everyone came to the hotel breakfast in flip-flops and sweats, and a lady stole Kyle’s pancake right out from under him because and I quote, “is going to miss her flight.” I am curious. What do pancakes and morning flights have to do with anything. And yes, it was literally the last pancake, by the way. Anyway, we are home (sort of). As I reach for my adaptor, Eli reminds me that those plugs, plug right in.

We enjoyed the journey and are very glad to be back.