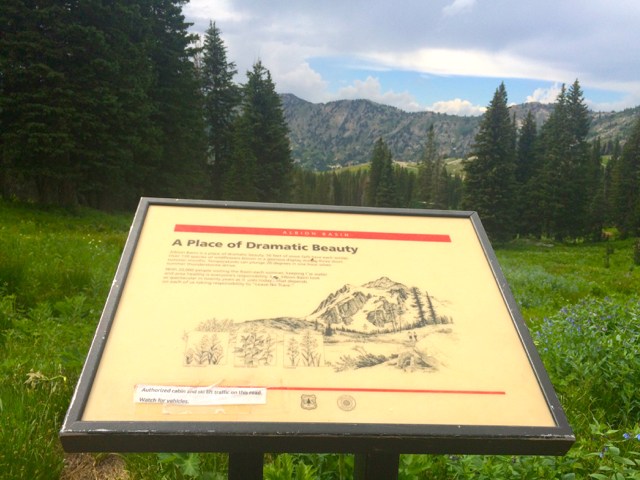 “Is this Big or is this Little?” 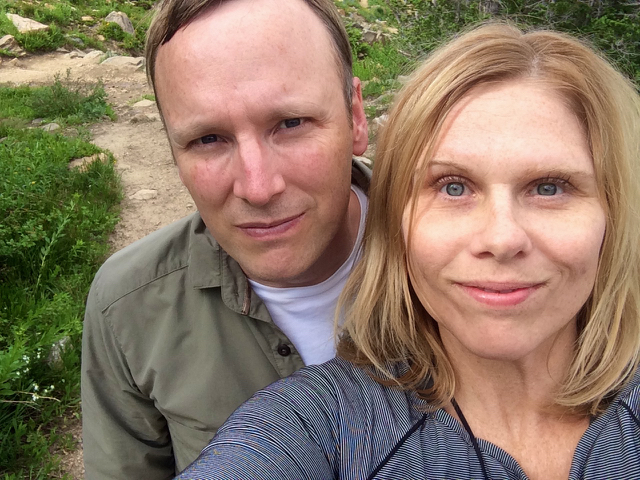 Skateboarding with their friends won over hiking with their parents, so the boys stayed behind. Consequently, as Dave and I drove up the canyon, I was equally sad (that the boys were not there) and glad (I was able to have some alone time with Dave).  Dave and I drove up higher and higher until we reached this dude wearing a jacket (mind you it was like a million degrees down in the valley) standing outside one of those little national-park-styled booths that look like tiny cabins.  We stopped. I unrolled the window.

“Sure” We both said.

“I am just here to help. Please park only in designated areas, and no dogs are allowed in the watershed.”  He responded.  (I was a little surprised because I was certain he was going to charge us a fee. He didn’t.) 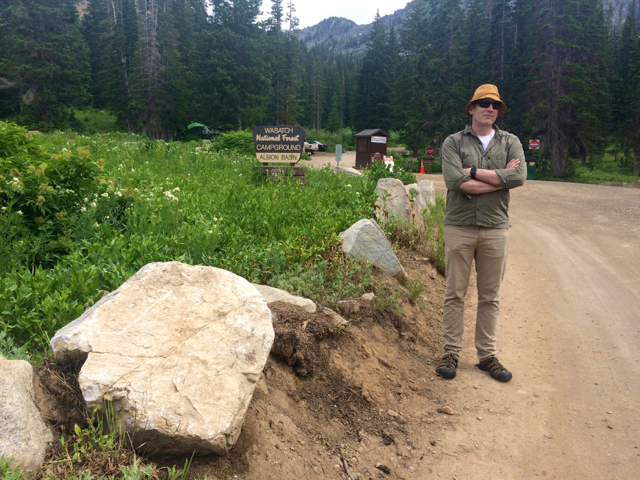 I grabbed the map and handed it to Dave. At that I shut the window, we all waved (yes, Dave, the dude and I), and we drove on. Just feet past the tiny booth the pavement ended. Now on a dirt road we kept driving up, up, up. After a really long and slightly winding switchback (or two), we passed the first parking lot. It was on the right. I slowed, and then Dave said,

“Keep driving to the next one.”

Here is the deal: Little Cottonwood Canyon is stunning. With its high altitude pines, vast array of wildflowers, and mountainous granite backdrop, it feels Alps-y, and specifically reminds me of the hills around Chamonix, France.  I forgot how much I love this area.  We arrived at the top parking lot. I put on my warm shirt (that dude was smart wearing a jacket), switched my blister-covered feet into a pair of tennis shoes, and Dave took  (in his words), “a giant swig” of water.

Pointing at the large and now empty cup in the cup-holder, I said,  “No, I finished my drink, but thanks!”

All doors were locked, my laces were tied, and we were on our way. As we walked, I looked at the billions of wild flowers scattered around us and said, “I should have brought my real camera.” Thank God for cellphones, because its camera would suffice, and because I had no children to force into scenic poses, so would Dave. 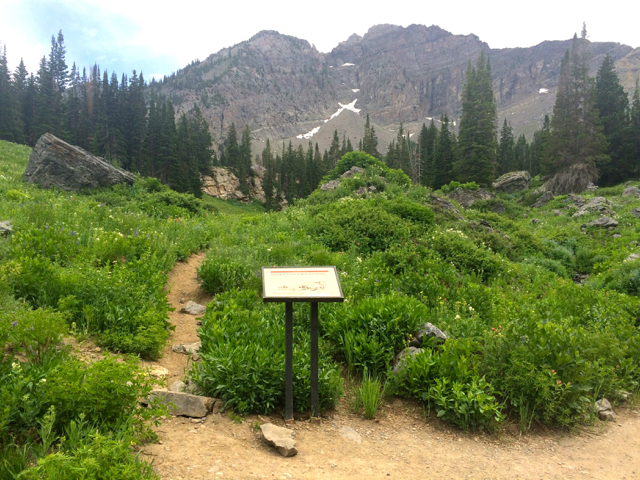 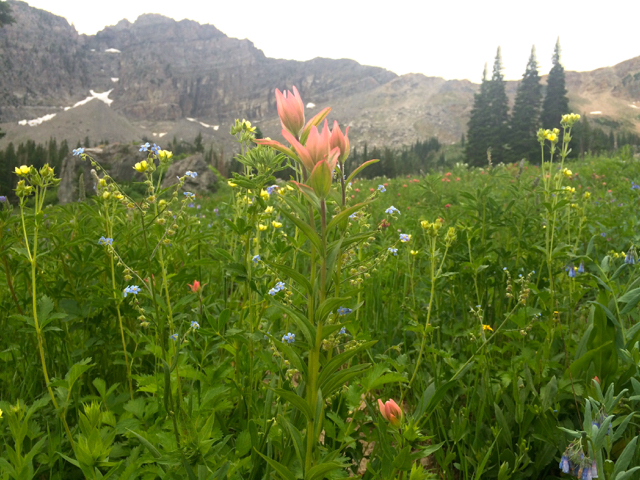 The hike to Cecret Lake (yes, that is how they spell it) is a little less than a mile and the elevation climb is a little less than 500 feet. In that short distance, we hiked along a lovely campground, sandstone cliffs, rocks of all shapes and sizes, by a tiny granite-filled canyon, and all the varieties of mountain flora and one fauna (I saw a squirrel) you can imagine.  Because the parking lot and the hike were not crowded I assumed (fantasized) that Dave and I had discovered our very own secret paradise.  Of course my assumption is incorrect. Like I mentioned, the Albion Basin is a short drive up the canyon (about twenty-five minutes). It is one of the most popular hiking places in the Salt Lake Valley and with good reason. 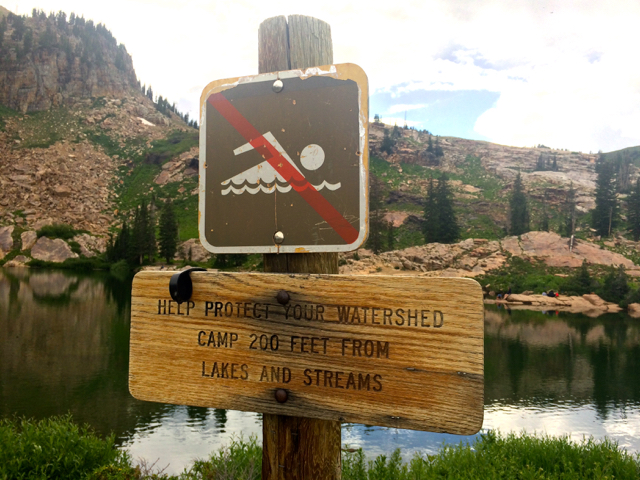 As we walked, we talked. In fact, I have found that walking together is the best way we talk together. With Kyle and Eli somewhere on their skateboards, Dave and I also did not have to speak in code. And somehow the news of the day, like stupid Bill Cosby, steered our conversation to the subject of dating. And as we hiked our talk drifted from our own silly teenage dating experiences to what is the best dating advice and guidance for Kyle and Eli. We were sitting on a big piece of rock along Cecret Lake, looking at the mountains and the dark clouds in the distance when the first flash of insight came.

“I am glad I was afraid of dating boys when I was a teenager.”
I said. Dave listened as I mentioned how my fear of boys made their advances very confusing.
“I was a slow mover too.” Dave responded, and I wondered if the cute little squirrel foraging next us was getting any of it.
I continued, “Dave, It was so weird. I really liked boys. I talked to them. I flirted with them. When they wanted to kiss me I completely freaked out. I was terrified.”
“I totally get it.” Dave said while mentioning something about the vixen who made it a little easier for him.
“I just did not want to move as fast as they did.” I said and continued, “I was giving those boys very mixed messages and I did not even see it.” I said. 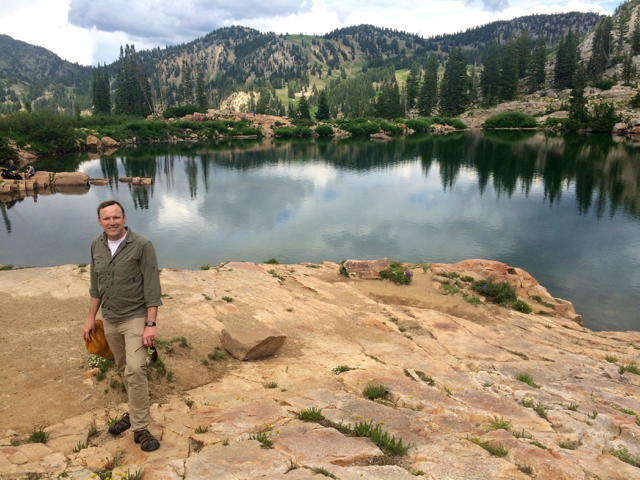 We got up, tried to walk along the lake, but the path ended. I stood there and looked. Cecret Lake is so beyond the beyond. We selfied (of course) and then we decided I must practice (perfect) my “Paris Hilton” picture-taking pose.  Dave tells me he read somewhere that one of the things that helped propel Paris Hilton into the limelight was her ability to consistently take a flawless picture.

“She learned her angles and she practiced.” He said and we both laughed. 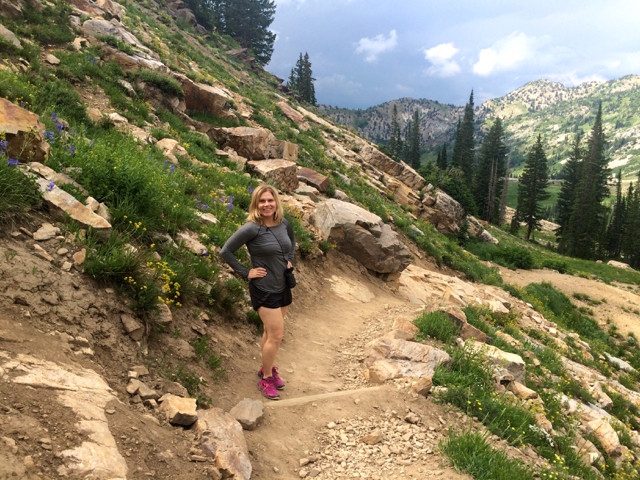 I ran closer to the lake, asked him to snap a few shots while I twisted my body and stuck my boobs out. Yes, I have worked on it, or better, I have work to do [wink wink]. Then we started back down and that is when Dave noticed a super cool little granite canyon beyond the bushes.  He walked over and exclaimed,

I did. And we looked, we admired, and we started talking dating again. We know adults who will not talk about dating (or sex, for that matter) with their kids. We know other adults who are on the opposite end of the spectrum. They scare me the most.  They are extremely permissive, and so forcefully open and accepting that they can inadvertently push confused teens into corners. Because the teen assumes the adult knows best, once in the corner, the teen remains, and the consequences can be catastrophic. So yes, we realize that we adults can really screw up the message. And yes, we do not want to be those kinds of adults. Bottom line is we agreed that dating is tough, that kids move at all different speeds, and that we want to help our boys. 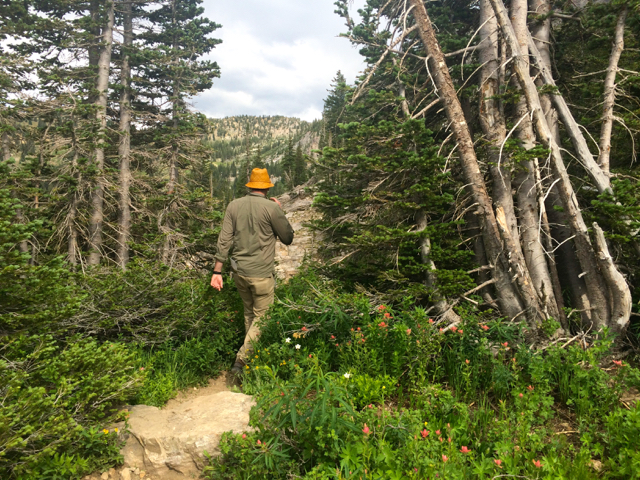 The clouds were rolling in in a dark grey mountain beauty. We felt the drops, opted to skip the bathroom as we ran to our car. Mud splashed as we drove down, and the sky cleared the closer we came to the canyon’s mouth. With all the wisdom we gleaned while sharing our secrets at Cecret Lake we felt compelled to conclude. As Dave drove I said,

“That is it. If any adult had given me not only permission to move at my own pace, but to verbalize my boundary out loud, that would have been the one thing that would have made a difference. I was terrified of dating and I had no idea how to say so or how to say slow it down.”

We agreed that out loud boundaries are great start. We will let you know how it goes with our boys. Cross your fingers.

We left the canyon with a plan to bring the boys ASAP to Cecret Lake and (of course) to talk to them about dating. At that, we headed to our favorite Vietnamese restaurant and checked in with the boys. Yes, they are still skateboarding. 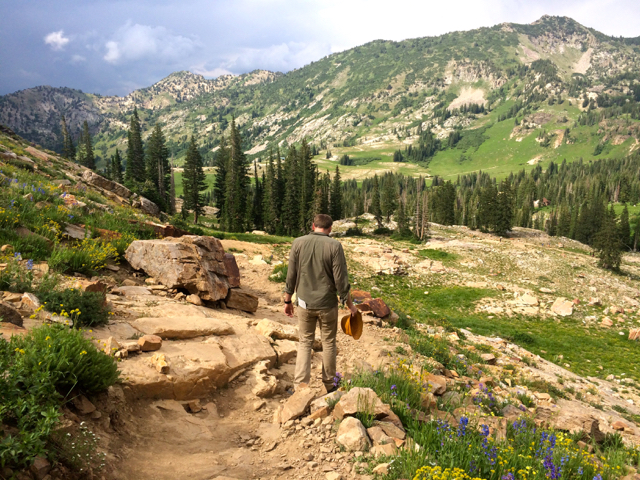