I cannot say this enough: When you are on the road, and for that matter, anytime you feel inspired, and even if you photograph said moment, you should still find a way to jot the moment down.

A most special moment indeed.

We are all busy. We all take pictures. As many pictures as we take, and as much as we try to remember, we often forget. I know I do.  I am far from a perfect chronicler. If I had a dollar for every yummy Thai restaurant I find, then forget its name and location, I could use that money to go on the best yellow curry tour our world has to offer. There is magic in visually capturing a moment. I would argue that there is also magic in note taking. Writing moments down and capturing the tiny details allows us to remember the nuance of our journey.  Great lodging, crazy places, odd encounters, and yummy restaurants (if I remember to write them down) are accurately recounted.  My notes remind me why something is so trashy, or why a restaurant is so good in a very personal, “best yellow curry ever” sort of way.

Sure, the pictures of the San Francisco Airport Centurion Lounge show, tucked away in the San Francisco airport, a hip, contemporary-designed foodie paradise. Notes, on the other hand, can convey the dirt, such as what really happened while we waited. In the lounge Dave and I sat on each side of this very peculiar lady. She was sitting in the quiet area on one of three chaise lounges. She would not move and I needed to rest. While I rested, she filed her toenails. And yes, her use of her cellphone’s speakerphone pushed me over the edge.  At once I knew that I needed to up my airport-lounge-game. Next time I will be more creative about getting a good seat.  Odd folks or not, I keep going back because Dave has a membership. I also know the Centurion Lounge has really good food and serves alcohol — both served the weird lady well. See, once the weird lady took a break, ate some food and drank a glass of wine, she became delightful and conversant. I remember these little details because I wrote them down. 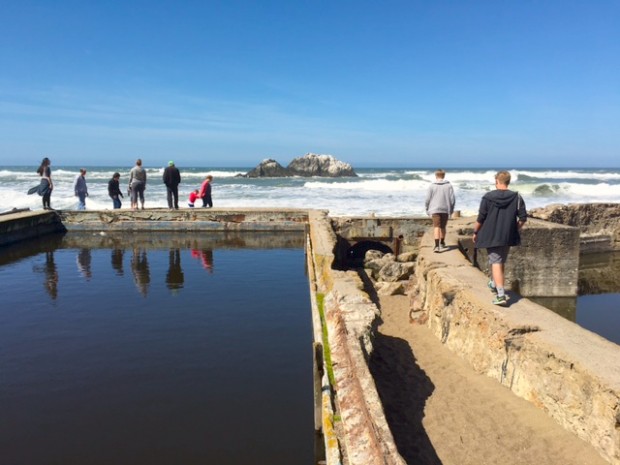 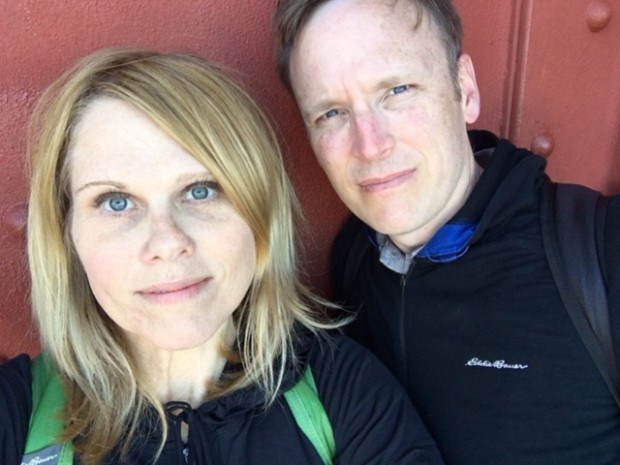 Me and Big Daddy at the Golden Gate Bridge, San Francisco, California — I finally walked all the way across! Woot!

Last weekend we ate at a San Francisco-based Burmese/Thai restaurant. I did not write the name down so I had to search. Thankfully, I found it.  We were about one-third of the way on our coast hike from the Sutro Baths to the Golden Gate Bridge. I was hungry and needed to pee. We left the path, crossed the street, and walked along a golf course.  We walked up and over a hill, I think, and into Lincoln Park, which of course reminded me of the OPI nail polish color, “Lincoln Park After Dark.”

Then I said it out loud: “Lincoln Park After Dark.”

It was early afternoon and as we walked closer, Pagen Restaurant appeared closed. We read the sign: Open Fridays from 11:00 AM – 3:00 PM. 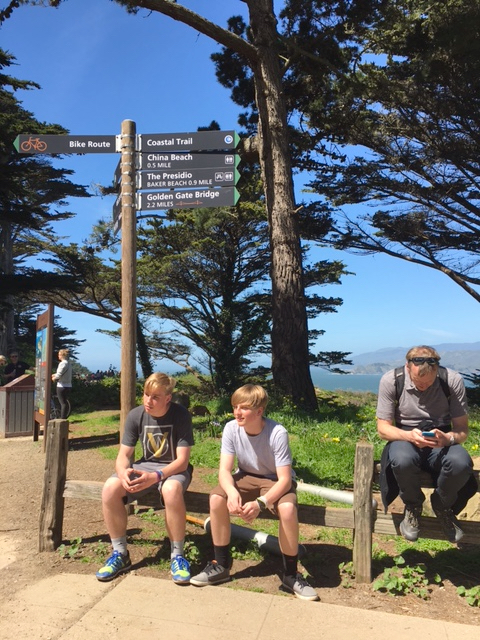 California Coastal Trail, San Francisco, California. In this photos, I believe Dave is searching for a place to get a snack.

My last “Notes on My iPhone” post was on our third day, (March 14).  Since then I have been distracted  writing about such things as beautiful and historic Greece, Greece’s crumbling economy, and all of my various existential crises. Now home, it is time to share these notes with you. Between loads of laundry and refilling my cup of Clipper Brand Organic White Tea with Vanilla (yes, I wrote the brand and flavor down when I found this tea at the Kensington, London Whole Foods — and now have it shipped right here to Salt Lake City, Utah), 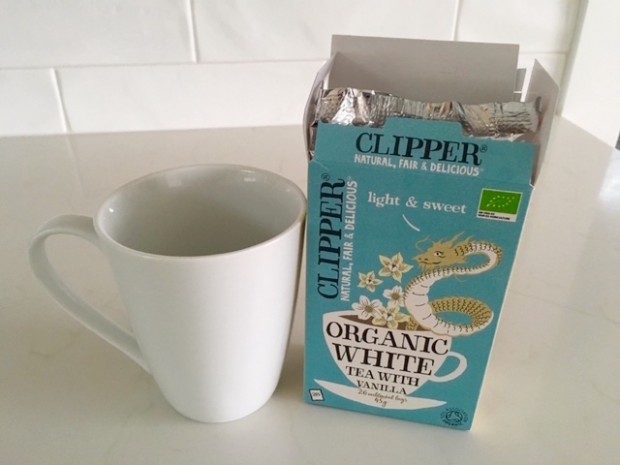 Clipper Brand Organic White Tea with Vanilla. (And no, I am not being paid to post this.)

I present to you, The Adams Family Takes on Greece Par Deux (of course with some editorializing along the way)!

Never fear.  I do not have time to edit and post all of the notes here (and I don’t want to overload you in one offering).  I promise  that over the next bit that I will iPhone-note you through our entire “San Francisco to Greece and Back” journey. Enjoy. 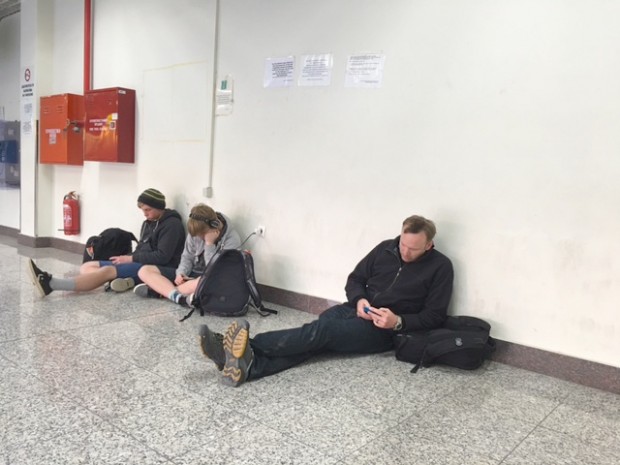 The Arrivals Area of the Santorini, Greece, Airport 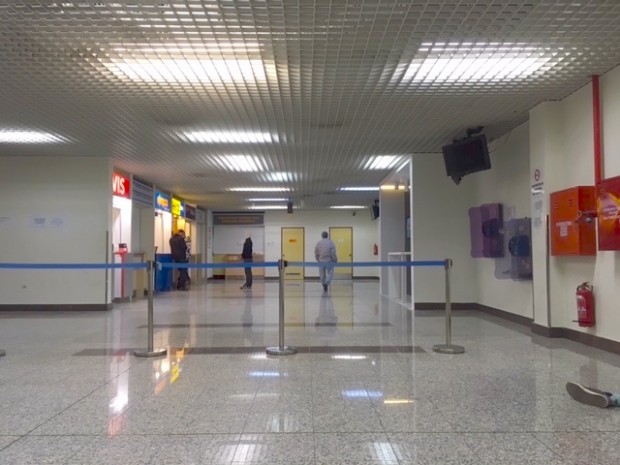 The Arrivals Area, including the Rental Car Area of the Santorini, Greece Airport -To orient the two pictures note Kyle’s foot is on the lower right.

[I love Dave. I love Dave’s reactions to things. The following took place at the Santorini Airport.  The airport car rentals are located in a very small part of the arrivals area. The boys were sitting on the floor. I had asked a man to move over so I could sit on the bench. He hesitated, picked his bag down, and let me sit. I watched the following.]

Dave is talking to the Hertz agent. The Hertz agent leaves and comes back. They talk. I can see that Dave is annoyed. He  just stormed out of the airport, mumbling something about the half full tank. He has been gone, I mean, disappeared for the past 15 minutes, apparently long enough to put enough gas in the car.  Dave is back. The Hertz guy just went to check our tank again. I’m waiting for him to return and tell Dave that there is still not enough gas. In the meantime, I recommend that Dave tell us where he is going next time.

He agrees. Dave tells me that Hertz would charge something like 43 euro to put in another two gallons. That’s lame. I am with Dave. [Additionally], that same Hertz  dude argued with me when we rented our smashed up Hertz car.

“What’s the problem?” He asked.
“It’s smashed on the outside, not the inside.”  I responded.
“It doesn’t change how the car runs, does it?” He snapped.

[Another crazy thing is the lack or inconsistent security at the Greece airports. Santorini is no different. My favorite, and really a non-security, item is the following]:

Small Sterilite containers, like you might buy at Wal-Mart, to place items in to go through security. 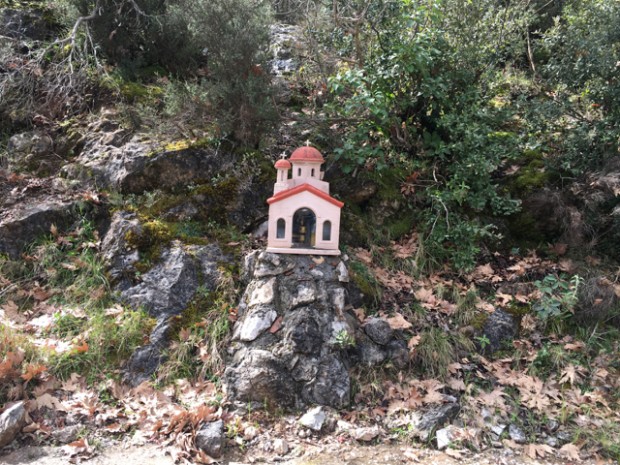 The roads of Greece are covered in variations on this style of roadside memorial. Different parts of Greece have distinctive architecture for their churches, and the roadside mini-churches mirror this.

Back on Mainland Greece

The Athens Airport is very nice and very modern. My very favorite part was the pharmacy located in the arrivals area. I think I mentioned that I had a crazy allergic reaction somewhere between Boston and Frankfurt. I nearly itched all of the skin off of my very swollen ankles and calves. The Athens airport pharmacist was competent, spoke really good English, and gave me what my at-home doctor recommended. The rental car was a different story. Here is what I wrote. By the way, that car grew on me.

Avis Athens, [on the other hand], was not as awesome. Avis, thank you for renting us a car that smells like a freaking ashtray. We are Avis preferred. Your Mazda 3 is smashed up and has nearly 57,000 km on it. Bad job. 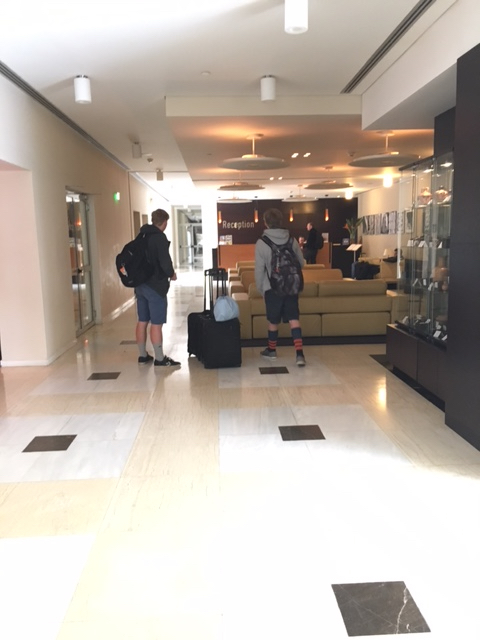 [It is now March 18.  We are at our first mainland Greece hotel, the Elefsina Hotel in none other than Elefsina, Greece. It is a very nice, business-style hotel in an area where there are no other hotels. It was late when we checked in and the Americans in the room next to ours were partying like rock stars. Ok. They were not partying like rockstars. They were very loud. I commend the hotel for dealing with the noise. And I applaud those American girls for quieting down when asked. Your mothers would be proud. The breakfast was not special, but good. The best part was the music — at breakfast, that is. There is nothing better than being in a place where no one speaks English and hearing one of your favorite songs.]

The Head in the Heart’s, “Winter Song” is playing right now at the hotel breakfast. It feels like home.

We left the hotel and began our five day four night Greece road trip. What an eye opener. 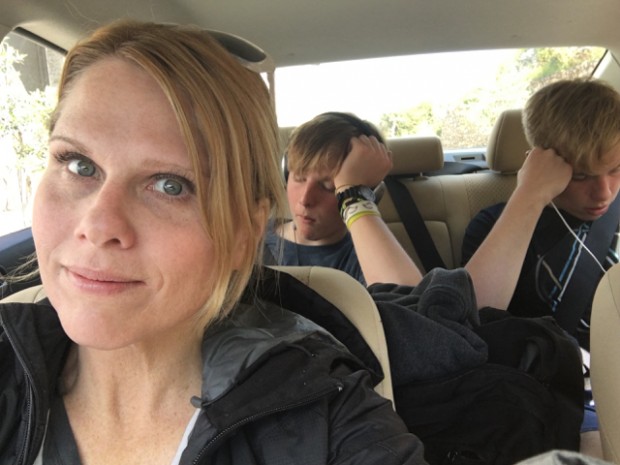