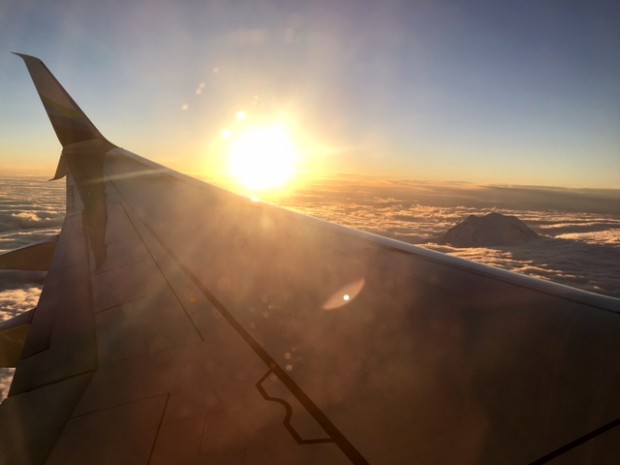 [Be warned: Not only did we cover a lot of physical territory on our return flight, my words here are all over the map!]

It is 6:30 AM.  We are on the last leg of our epic adventure, traveling on an Alaska Airlines flight from Seattle to Salt Lake City. The sun is shining through the window bright. I am sitting in seat 17A.  The middle seats are empty, and our family has the entire row. Seconds ago I stole my neck pillow back. I feel a little guilty. Dave really seemed comfortable. 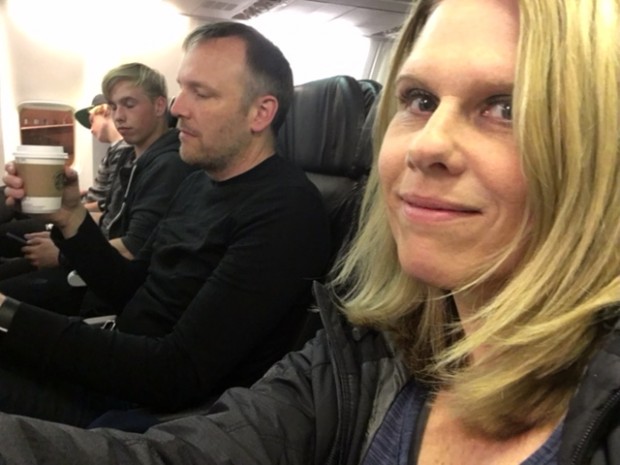 Us on our flight from Seattle, Washing to Salt Lake City, Utah

Over the intercom I hear a voice. It is the captain:

“We are at a cruising altitude of 39,000 feet …Mad props (yes, he did say ‘mad props’). The captain continues,  “We are going to be on time, or very close to it.  We are lucky to have four of Alaska’s top flight attendants with us today…Enjoy the flight.” 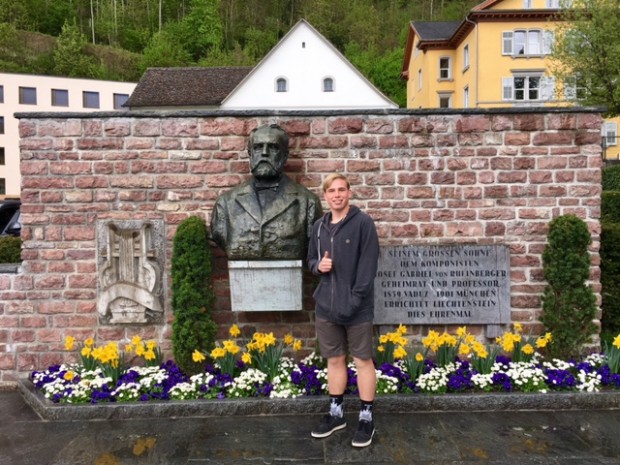 Kyle at the Liechtenstein Main Square, our last day, April, 2017

The return travel portion of our journey home began approximately thirty-four hours ago when I heard the beep, beep, beep of my alarm. I had no idea what was happening. Confused, I said,

“Stop that noise! Seriously, turn it off.  Whose alarm is that?” (It was mine.)

It was 3:30 AM — Zurich time. Somehow we showered, packed, ate breakfast, and made our way to the airport. I was patted down in Seattle. At the Zurich airport, both Kyle and I had our bags searched. Then the sweet Swiss airport security agent lady held the two tiny jars up high.

“That is my jam for the plane.” I said, and then I looked at Kyle and mumbled, “Not music, but like real jam.”

Examining them she mumbled, or better, spoke German, “[insert German words here].” I listened incomprehensibly. Then smiled when I heard the word, “marmalade.”

“Yes, the marmalade.” I proclaimed.

She placed the marmalade with my little toothpaste as she crammed all of my small items into one plastic bag. Finally, she instructed me to keep all items in that bag.  As I watched her, all I could think was,

“my jam is with my toothpaste. That’s weird.” 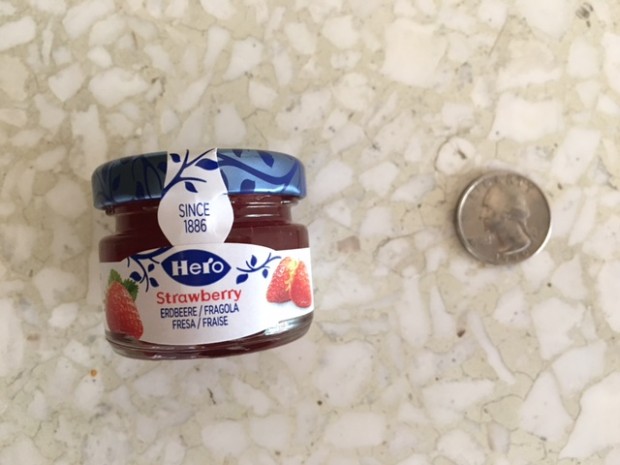 A picture of one of my little jams that made it home from Zurich, Switzerland, April 2017

We made our way to the gate and as we were boarding, I heard,

“If your name is called, please come and speak to a gate agent.” I heard the name “Adams,” and said, “Dude, they just called our name.”

Sure enough, his name was called, which ultimately meant he was bumped to first class.

Kyle piped in and said, “Mom should get the seat.”

Let me preface this next part and to tell you that in all the years of flying, flights and upgrades, I have never taken the first class seat. Nevertheless, Dave always offers. And yes, on occasion, we have upgraded together. But, because I seem to be allergic to all food, which means I would not fully enjoy the luxury of a first class meal, and because I am also small in stature, which means I fit in a middle seat between the boys more comfortably, I always feel guilty taking the upgrade.  The closest I came to taking him up on his offer is when I suggested we give the upgrade to his mom, who was traveling with us.  (*Hold up! Do not think I am a sweet daughter-in-law because I suggested Dave give his mom the upgrade. Sending his mom to first class was as much as a gift for me as it was for her. We were at the end of a long journey, a journey, where, for two weeks, I listened to her talk at great length as she detailed her previous trips to England including, but not limited to, things such as the intricacies of every meal, a full-blown accounting of where she ate, details such as how the restaurant was decorated, how many people were also eating at said restaurant, then an exhaustive listing of what she and her companions ate, how the food was prepared, and how long it took for her to eat compared to everyone else. **By the way, I bumped her to first class in the van too.  Of course and in truth, I  wanted her to be comfortable as we traveled across the country. As a result, I insisted she sit in the front passenger seat. I sat in the far the back. It was great. Dave drove. She talked. I hid. *Please be hard on me and not her. For more than forty years she was an English professor. And is much more accustomed to an audience. When it came to our return flight, I knew I had no more energy to listen so I insisted she have Dave’s first class upgrade.) 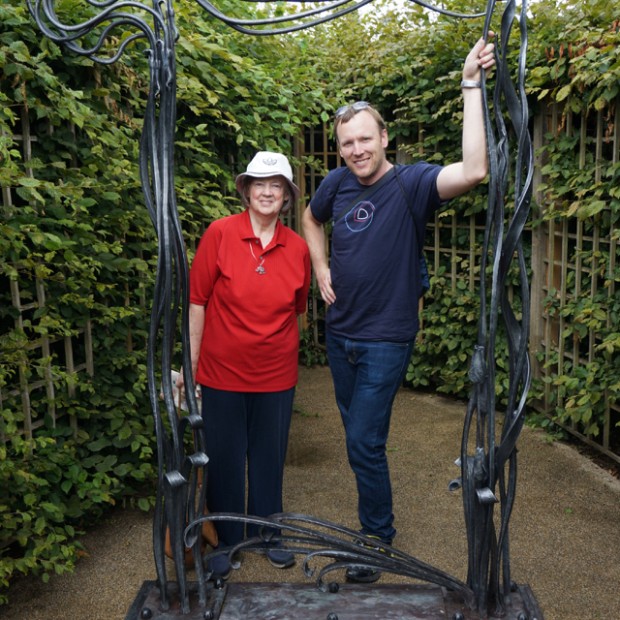 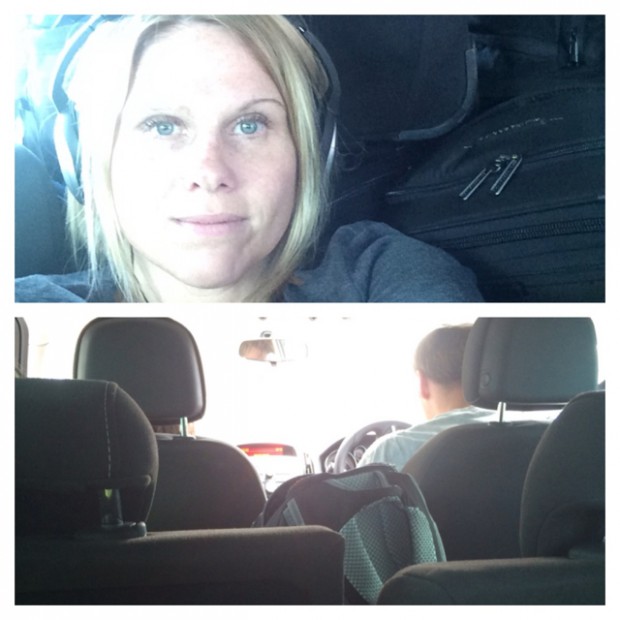 Me in the back of our rental van somewhere between London and Brighton, England, July, 2014

I was exhausted. I needed a break and I really needed a moment alone. So I took a deep breath and I took the seat. Of course I immediately offered to split the time with Dave. (You can check my text messages for proof. It was sort of ridiculous actually.)

“I think you should stay there the entire time.” Then he demanded, “But you’d better sleep.” 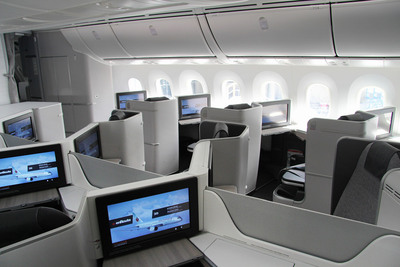 I did. I slept. Even after two flight attendants woke me up, I forced myself back to sleep. Sure, I went back and visited Dave and the boys a few times. Of course I had moments of lonely. I hate being alone all those hours. But people it was awesome. 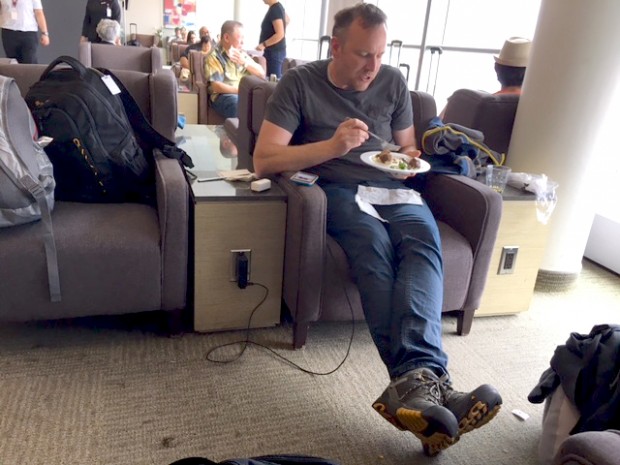 Dave in Toronto Airport’s Plaza Premium Lounge — the only picture I took, April 2017 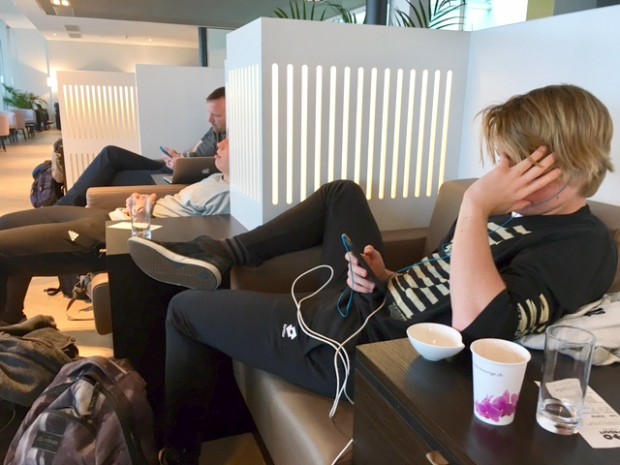 Dave & the boys at the Zurich Airport Aspire Lounge, April 2017.

We landed in Toronto, where we had a six-hour layover, a layover where I sat in the exact same chair in the Plaza Premium Lounge for exactly five hours. For the past few days prior Eli had been bugging me because he wanted to download some Netflix shows. Apparently you can only download Netflix shows on one device at a time and my iPad had the shows.  So to help out a brother, who is really my son, I sat and watched my remaining downloads, which were the last three episodes of the teen-suicide drama “Thirteen Reasons Why.” See, I have been watching the show in tandem with Eli.  He read the book in 7th grade. And after watching the show, I am now retroactively questioning another parenting choice. I can’t change the past, but I can address the now.

I finished the last episode, and with our food-stained yet comfortable airport lounge chairs facing each other, I announced,

Like the great literary deconstruction specialist he is, Kyle asked, “What did you think?”

“I have mixed feelings.”  I responded.

He shook his head affirmatively and asked, “Like what?”

“For starters, Hannah, the girl whose suicide was graphicaly depicted, announced her despair throughout the show.  She clearly stated that she felt:  flat, hopeless and apathetic.  Consequently, I would argue that it seems a little incongruous that in her hopeless state she had enough energy to make thirteen, very detailed, sixty-minute cassette tapes — not to mention the fortitude it took to procure a cassette recorder … That is a lot of energy.”

“I agree,” Eli piped in.  “And to tell 13 specific people why they played a part in her suicide, well, that is a lot! Mom, there were so many things that did not make sense.” 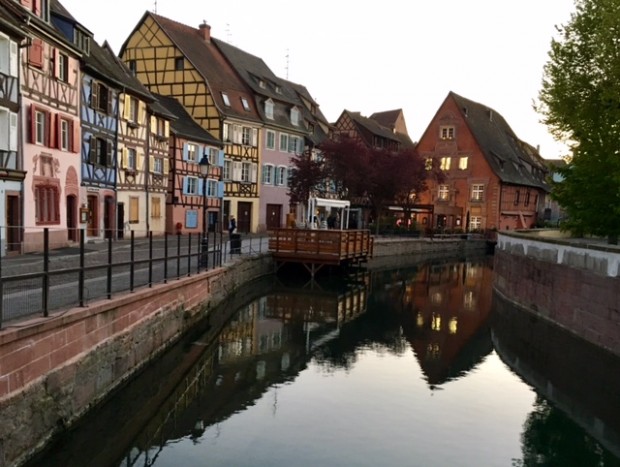 We continued talking about things like teen suicide, rape and why we think narrow literary stereotypes are lame.  Through our analysis we compared the merits of real life versus making a best-selling teen novel turned Netflix-binge watch.   We all agree. Reality and being yourself should win, including the dirty, less glamorous parts. We also concluded (again), that suicide and suicide prevention was not portrayed accurately or well in this Netflix series.

Our conversation wound down and soon we were on our way to our next flight: Toronto to Seattle.  I convinced a tiny, curly haired, and very entertaining teen to trade seats with us. I noticed he was flying alone. I convinced him by telling him he would be sitting behind my sons who would both be happy to talk with him about Pokémon or whatever. He agreed and probably would have moved regardless.  But he did move with a lot of back and forth regarding Gameboy Pokémon compared to travesty that is Pokémon Go. And yes, as a level twenty-four Pokémon Go player, I participated in the trash talk.  (I am not kidding. In fact I leveled up on this trip.) Huzzah!

When I noticed no one was sitting in the seats in front of Dave and me, I urged Kyle to move so both boys could have their own row. As they stretched out, I asked Dave, “should I have offered the Gameboy kid the empty seats?”

To which he said, “No way! If he’d stayed in the seat he was given, he’d still have someone sitting next to him.” 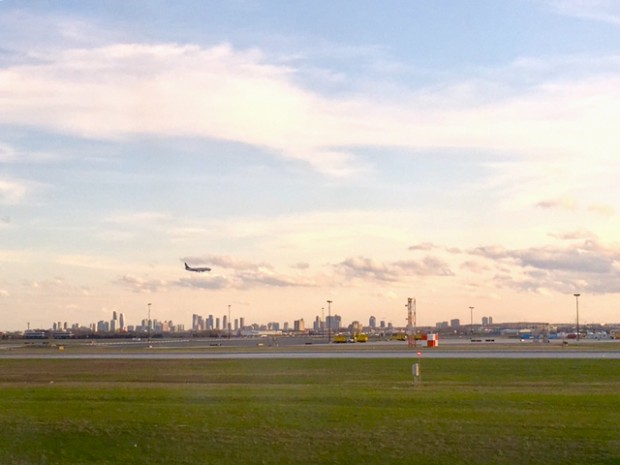 View from a plane at the Toronto, Canada International Airport, April, 2017

I let it be, wrapped my clean (because I keep it in a backpack) neck pillow around my neck and turned on a video on the in-flight entertainment system. Ben Affleck was saying words and I could not stay awake.  We landed in Seattle delirious and moments later we met up for a quick bite with one of our favorite humans, Justin. And because it was Seattle and because I stated out loud that I have celiac, the Cheesecake Factory wanted to get my order right. They re-made my dinner three times. I did not ask them to keep remaking my food. It was Jen, our waitress, followed by her manager. They insisted.

“We are closing down our kitchen, but we want to get you something you can eat.”

It was a moment of kindness after a very long flight. I was grateful. They continued,

“We don’t want you to get sick or have some weird allergic reaction.” 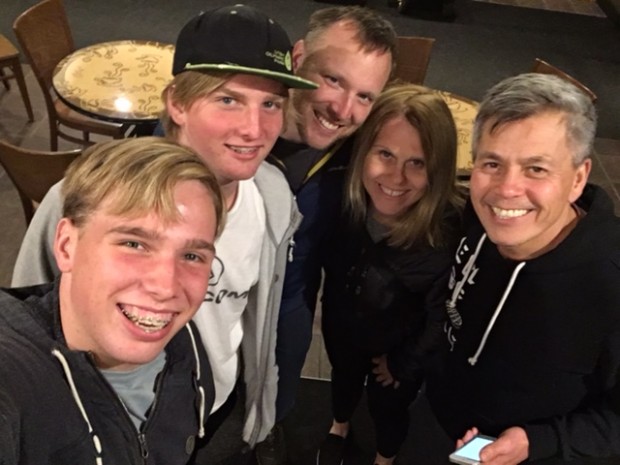 Us with Justin, Seattle, Washington, April, 2017

Here I sit. Around my neck, my pillow snakes. I am wearing noise-canceling headphones, listening to my Spotify Mix and typing away. Now hovering over Salt Lake City, I feel super reflective. I feel reflective as a means to distract me from the mad, turbulence.  Our flight path had us do a bunch of wide circles before we finally came in to land.  As I cross my fingers and hold a hand to the ceiling (not really), I feel grateful. Truthfully, I am grateful we have embraced the what-you-see-is-what-you-get aspect of life, especially as far as travel goes. As such, I own the moments like when I bring marmalade on a plane, or that I would selfishly help my mother-in-law as a means to help myself, or that for my boys I would totally sit in a seat for five straight hours (because I did) and binge watch Netflix. Instead of shame, I think it is cool that the boys and I have played Pokémon all over the world.  And finally, I am so glad that I have learned that profound experiences do not need to be orchestrated by, say, taking the kids to every self-important, humble-brag-to-your-friends museum such as the Louvre or the Prado, unless, that is, you can run them through said museum in less than an hour on “free” museum days. 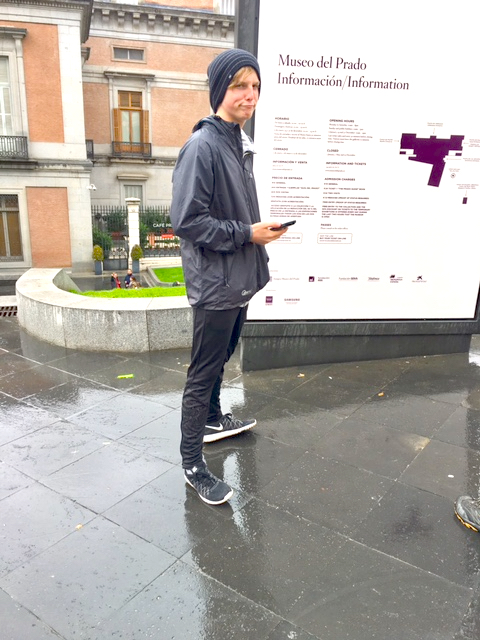 Easy E outside of the Prado Museum, Madrid, Spain, November, 2016 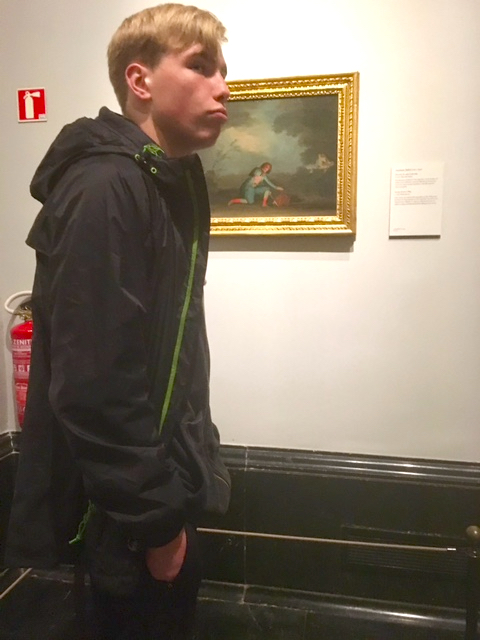 Kyle in the Prado Museum, Madrid, Spain, during our “free last 2 hours of Sunday” visit. We did the museum in under an hour. I surreptitiously took this photo. I am not a fan of “no photo” policies. 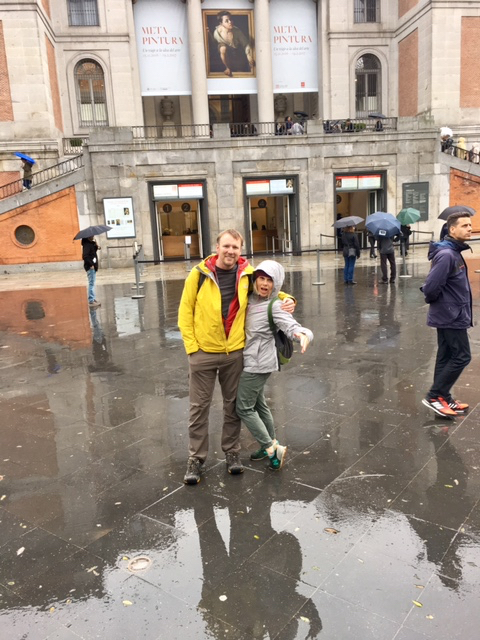 Dave & I outside of the Prado Museum, Madrid, Spain, November, 2016