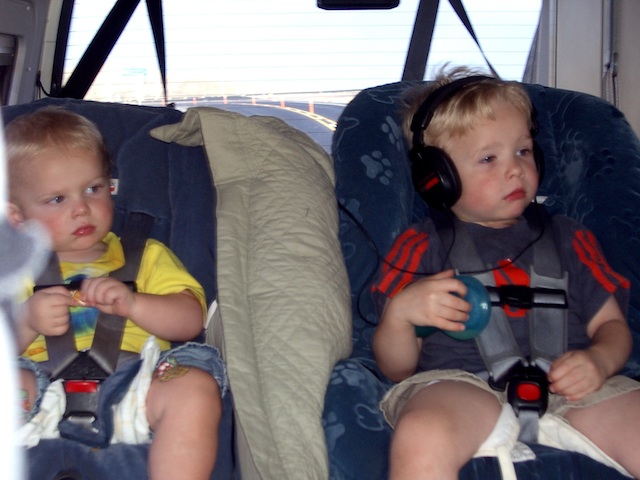 Watching a movie and Riding in the camper van

Hello everyone. We arrived in Utah on Oct 3rd (2002). We have been off the internet for days. (It seems like months.) We are posting this entry via a dial-up connection. We are missing our cable modem. Spoiled we have been. [2015 Beth: If only 2002 Beth knew how spoiled we would all become.]

Our trip across the country was everything we thought it would be and of course much much more. We left Northern Virginia about 3:30 PM on September 26. We decided to take the Mid states route and with John Denver playing in the background we headed towards West Virginia. (No, not really. Playing John Denver just created a nice visual: “West Virginia, Blue Ridge Mountains, Shenandoah Valley.”).

Our first night was spent alongside a row of trucks at and obscure way-side rest of sorts. Dave decided to park away from the big trucks so we wouldn’t be run over during the night. Due to hurricane Lili blowing up from Alabama and the buckets of rain pooring down on us we decided not to pop the camper, so Dave and I got the kids settled. Eli slept in his car seat and Kyle slept next to us on the bottom bed, (smaller than a double larger than a twin). And eventually Eli joined the three of us.

A few hours later we were awoken by bright lights and the noise of unloading, and lots of forwards and reverses from the trucks outside our windows. The kids were asleep, I pretended not to notice and Dave anxiously anticipated the departure of these trucks. You see earlier, when we were on the road, I made it known that I was happy to sleep in the camper, but that I wanted to be in a nice quiet camp site or rest stop. Because West Virginia does not allow overnight parking at their rest-stops and because Dave and I could not keep our eyes open any longer, we ended up here amongst the forlorn trucks who had to do the same.

Shortly after the trucks had finished their job, about 6:30AM I was awoken by my cute Kyle.

“Mommy, it’s light. We don’t have to sleep. Let’s get some breaks fass.”

As I tried to get a grip, Dave took Kyle for a walk. Directly outside our van, I mean directly two feet, (if that), from our van was parked, was a portion of a very mangled semi. Next to that mangled portion there was more and on it went. Across the way, next to the towing company’s building were rows and rows of plastic wrap, huge plastic wrap, the wrap salvaged from the semi. Unknown to us was that we were parked in a towing lot. What they were doing during the night was towing the many parts of the wrecked semi we drove past on our way to our over night stay.

Dave came back to the van to get ready and I took Kyle over to the local eatery across the dirt parking area. As Kyle and I were walking a way a man from the towing yard came toward the van. He stopped Dave. Dave told me that the man wanted to kindly let him know that where we were parked had made it a bit difficult for them to do there work during the night.

After some good down home West Virginia pancakes, eggs and I think Dave had sausage, we were on the road again.

The boys were great through all of this. Eli slept like a dream in his seat even though his teething eventually woke him up. Kyle kept us going with his bright vivacious personality.

I will continue our tail soon.