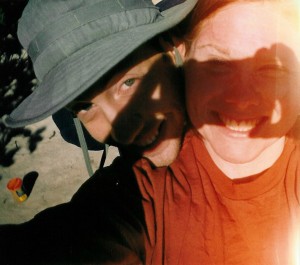 I’ve known Dave for ten years. Almost exactly eight years ago is when the magic began. Dave and I had been hanging out for a few months and were already pretty good friends. On my birthday I drove down to Provo from Salt Lake City to see my friend Jenae and her roommates. While I was there, Jenae’s roommate Ted suggested we call some people to play Scrabble. “Should we call Davy and Mike?” one of us said. I already knew that Dave was very cool and had felt like Mike was a kindred soul in this conservative place so I eagerly responded, “Yes.” After a few moments of talking with Dave, Ted handed me the phone. “Hey, why don’t you guys come over and hang out? It will be Ted and I for sure. Yeah, and it is my birthday so we are kind of celebrating.” Then I talked to Mike. “Will you come too?” I asked. “Well, I don’t know.” He teased. “Come on.” “Ok.”

Literally a few minutes later Dave and Mike arrived. Ted played a few games and went to bed. We were enjoying each other’s company so Mike, Dave and I continued to play and hang out for hours. As Mike handed me a little box he said, “Here, we got this for you.” No one had remembered except my Mom that it was my birthday and in the time between our phone call and their arrival they had put together a little something for me. It was one Mike’s pairs of earrings. “Thank you,” I gushed. 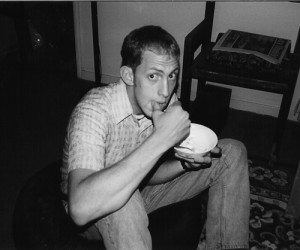 You see the previous two years were some of the lowest points in my life. Timing was on my side because I was ready for a change and both Mike and Dave were going through change as well. And that night the stars graciously aligned. Not only was I building two great friendships, without question, that night was the night I began to fall in love with Dave. I can actually thank Mike for that. Mike opened Dave up you see. His sensitivity was so contagious that the people around him couldn’t help opening up and taking emotional risks as well. 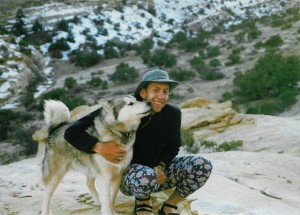 Mike and his dog Kayla

We made it through scrappy, yucky, horrible Taos, New Mexico. Ok it wasn’t that bad, but it was certainly a letdown. We almost turned back, instead we found our way to a beautiful hotel in Santa Fe where we were given a spectacular rate because we had to wait a few hours for them to get our room ready. We just put the kids to bed when I decided I couldn’t pass up taking a boiling hot bath in the enormous tub. After soaking for a few minutes I heard the phone ring and almost immediately from the other room I heard Dave say something like, “You have got to be kidding. No way. I am in shock.” I needed to know what had happened so I yelled, “Come here. What’s going on?” Holding the phone away from his mouth he said, “Mike Nelson is dead.” “What?” I screamed. “He fell through some ice in Alaska.” “What!”

I am in shock. Dave is in shock. Mike was Dave’s housemate just after Dave graduated from college, a free-spirit and a good friend. After he left his mission early, the mission we flew him home from (a long and funny story) he started to get into outdoor adventure and eventually, after spending six summers in Alaska, moved there last year to start a guide business and continue pursuing his dreams.

Life is funny though. One minute your interaction with someone is daily, profound; you know a person’s highs and lows, you know what someone eats and then it changes. There was a time when Dave and I were so worried about Mike not coming home from his solo camp out that we climbed up into the mountains to find him. And then while Mike was off exploring the world, we moved to the east coast where Dave was starting a business and a family. We would meet for dinners when we were all in town, and even just a few months ago one of our mutual friends said, “Mike is trying to get ahold of you guys.” We never did get ahold of each other.

Just about two weeks ago, Sunday April 4, I took my kids to the park. A woman who had a son the same age as my Eli purposefully came and sat next to me. She introduced herself. As we talked she told me her name was Julie and that she was the president of Exum Mountaineering of Utah. She continued to tell me about all the ice climbing and guide work she had done in Alaska. Of course I had to bring up Mike. When I came home I immediately told Dave about her and the Mike connection. “We need to get ahold of him.” I said and then I got sidetracked by one of my little boys. I kick myself for not acting on this gift.

The fact that we all drifted apart in no way takes away our fond memories and in no way takes away how much we cared about each other. I am sitting here in this hotel trying to figure out how we can make it back to Provo by tomorrow for the funeral. “Why did we come to New Mexico instead of going back through Colorado the other day like we discussed?” It felt like the right thing to continue on to New Mexico. I want to say goodbye to Mike properly. Like I said to Dave last night, “He’s not just in Alaska. We can’t reconnect with him when we find the time. He is gone.”

We get so busy in life that I know it is hard to keep track of everyone. I am glad for my time with Mike. I am glad he and I went on a crazy hike in waist deep snow in our shorts. I am glad he painted his toenails when he lived with Dave and I am glad he was so passionate. I am sad for the times I was out of line with him. I am very sad we didn’t reconnect just one more time. Why didn’t I just call or email?

To any of you out there, if I call you or email you too much or not enough, forgive me. I do think about you. I do care. I do love you. I am sorry if I bug you. I am learning how important life is, how important it is to put aside issues or just deal with them once and for all. Life is too short for issues. I don’t think you will die tomorrow. I just know that life gets hard, busy and fast. Mostly as each day passes I think or I hope I have a greater appreciation for the fragility of life. 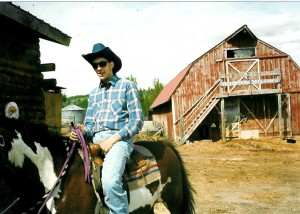 Mike riding a horse in Idaho

Mike I love you. I have a big ache in my heart right now. I know if you were here you would help it heal. Somehow though, I think, you probably are.

Article about Mike in the Juneau Empire (with photo)

Article about Mike in the Provo Daily Herald (with funeral info)

I posted this on a tribute site to Mike.

I know many of you know Mike much better than Dave and I do. Still, I have felt this gigantic loss over the past week. Thanks to this web site and emailing friends I have been able to swap stories about Mike which have made Dave and I remember even more fond memories which has made me a little more sad and a little more glad we crossed paths with Mike…

As we were racing back to Utah from New Mexico for the funeral, Dave, the kids and I headed north though Los Alamos where Kyle spotted a Fire Ant. Being unfamiliar with that part of the country it seemed like the fastest and most direct way. Up, up, up the mountains we drove. The pavement ended. We kept driving. We saw a “Road Closed” sign and kept on driving. We saw and “Expect Delays” sign and continued. We were committed. We kept driving up the dirt road. And by the way, we weren’t in a 4×4. We were in a Volkswagen Camper Van with car tires and lousy ground clearance. Normally I would be freaked out and frazzled, but I wasn’t. Dave said, “We’ll just drive until we can’t.” If we turned around at that point there would be no way we would make it to the funeral.

We kept on going. The road became increasingly muddy and rutty. In the middle of nowhere we laughed and said, “This is for Mike. He wouldn’t have it any other way.” Several times we nearly got stuck. After hours of driving on our shortcut the dirt road became smooth again. In the distance I saw what looked like a large rodent. It turned out to be a bear cub. “I hope its mother is not around.” Dave said. We raced away and made it to the pavement. We made it with forty-five minutes to spare…

Yesterday I sent Shane an email about this site right before I took Kyle to pre-school. On our way to pre-school Kyle and I usually say a prayer on the way. I always ask who he wants to say the prayer, and usually he says, “I want you too Mom.” Instead he said, “You. Wait, I do.” He proceeded to say, “Dear Heavenly Father Thank you that I can tell my friends about the bear cub and the fire ant. In the name of Jesus Christ Amen.” As I glanced back to tell him what a great job he did, I saw Mike sitting in the passenger seat. He was wearing that green hat he always wears on his adventures. I knew it was him when I saw his arms outstretched touching his knees, his head bobbing with a big, contemplative smile, and his long legs smashed up against the dashboard. “Pretty cool kid you’ve got there.” He said. I looked again and saw him smile. You may think I am crazy, but whatever happened on the way to pre-school brought me some comfort.