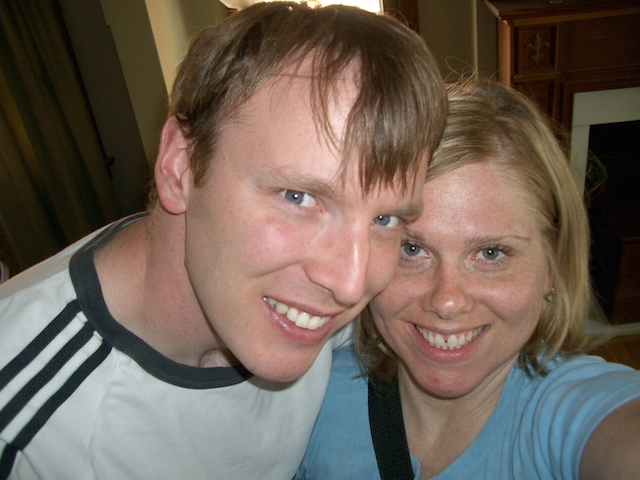 “An iron, we already have an iron. How weird is that, giving an iron.”

After much contemplation and some caffeine, it occurred to me that perhaps the iron that this website was referring to is metal.

Even though Dave is not much for holidays (of any kind), I am. I am wagering that our anniversary is no exception. Seeing as how I am all for the pomp and circumstance (at least some flowers and a kiss), I thought I could project my fantasy (once again) on him. So I got him something cool for our special day. Perhaps I will get myself a little anniversary gift as well. I think the Nikon D70 has iron in at least one of its components. I am sure the Accura MDX has iron in the dash board, right?

First things first. Because I am the only who always remembers, this year I decided to try another approach. Instead I stood back and decided to wait. I figured we have been married for along time so why can’t the gift I give myself is that Dave remembers our anniversary? And why can’t my gift to him be that I don’t pester him or threaten him with bodily harm if he forgets? (I will let you know how it goes.)

Yesterday my cover was nearly blown. We were at the Triceratops park, a park we go to when we are sick of the park that is closer to our house. We wanted to do something, were driving towards downtown, when Kyle asked if we could go to the Triceratops Park.

“Sure.” Dave and I both responded.

As soon as we arrived Kyle ran and joined the big group of kids playing with the giant inflated flying saucer thing. Even though the kids were older, Kyle instantly became the leader, protecting the ones who were left out, and fighting with the boy who would not let anyone take a turn.

Using my best park etiquette, I walked over to one of the parents to make sure everything was okay. You see I had noticed that the group of kids were part of a birthday party. It just so happens that I walked up to the father of the birthday girl,

And as he raised the several free Burger King Crowns in the air he said,

“Hey, and if your sons would like to make a crown we have extras.” 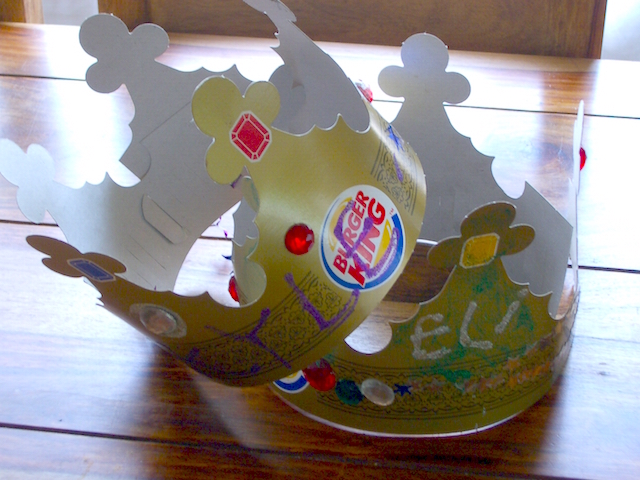 After Eli melted down (because the kids weren’t throwing him the saucer), both Kyle and Eli made their crowns, took the crumbs from the leftover birthday cake, (including sticking their fingers in the green frosting), and then we said goodbye. Dave had taken Eli to the swings at this point when I asked the birthday girl,

Then I looked at her parents and said,

“But this year I am trying not to bug my husband and trying to see if he remembers.”
The husband responded, “I feel like its my duty (as a man) to run over and remind him.”
“Don’t worry I won’t hold it against him.” We all laughed.

…Now I digress. A few months ago when I was having one of those sad and very introspective moments, I wrote a piece comparing women to Stepford Wives. (This was way before the latest movie came out.) I am including a portion today because I think it aptly captures how I feel about being married. I apologize a head of time if it is a little personal.

“It wasn’t until I first attended BYU that I felt like I might be living in a Stepford Wife World. Twenty-two year old handsome men were coming home from their Mormon missions eager to marry their nine-teen year-old (must-be-beautiful brides). The girls, hope-chest-filled, were raised to ‘Cleave unto their husbands.’ And cleave they did. At eighteen as I saw many of my friends enter into this matrimonial bliss, the Stepford-Wife-World was very enticing. Mormon robot wives with their scrapbooks and perfect hair were all around me. As a young woman, I was taught that the ultimate goal, the extreme rite of passage, and the way I would received eternal salvation and exaltation was through achieving the divine covenant of marriage. I wanted marriage bad. I wanted perfection. I wanted the promise of exaltation. I wanted the Celestial Kingdom! Hence, I wanted to do what I need to do. That meant I wanted to have dinner ready for my husband, have lots of babies, and worship the chosen ground my patriarchal leader, I mean, companion walked on.

It was ingrained: my worth was solely based on wether or not I had a man in my life. And my sole imperative meant that I to get a man, I would do anything, even if it meant learning all the rules to football. At least that is what I thought at eighteen.

By age twenty-one (through some act of God) I managed not to get myself married. At the time, my oldest brother said,

“Well, if you aren’t married by now, you might as well go on a (Mormon) mission.”

Realizing that my brother was right (not) and that I had truly lost my chance of ever achieving eternal salvation (the ultimate Stepford Wife Existence), I decided I must go and serve the Lord. In truth my thinking was this:

“If I was going to be a has-been, at least I could save some souls in the meantime.”

When I realized my worth was not depending on having a man in my life, or better, that I did not need a man to define my existence, I got married.

My life with Dave was (and still is) stubborn outspoken bliss. I was chubby, for instance, when we were married. Our wedding was not perfect either. Our wedding cake was too small, my wedding dress was too tight, and my brothers decided not to come. I have not seen my dad in years, and was not sure he even knew I was getting married. I was not nineteen. I was not sure if I wanted to quit my super cool job, and I certainly was not ready to agree with every word that came out of my husband’s mouth. Dave and I were married at the end of many busy business trips and the beginning of a big move. We were married on an extremely hot and humid summer day. I spent the month prior to my wedding at my in-laws house. I was in a strange town planning my wedding. I was feeling completely alone, because I was alone. None of my family was there to help. I do not think Dave’s mom had any idea how alone I was. It was not her responsibility to. She did help us find a reception place.  And thank God Dave’s best friend, Justin, and his girlfriend, saw how alone we were. They stepped in! They helped us with everything. Another friend gave us discount flowers. How cool is that?  I will always be grateful!

My wedding day was the best day of my life! It was perfect. Sitting there with my companion, someone I had searched long and hard for, and who was truly my best friend, was not something I take lightly.”

Today, June 27, 2004. HEY DAVY, Happy Anniversary my Big Love. Of course our marriage has had some bumps and bruises. What marriage doesn’t? But I look forward to every June 27th and I celebrate because it is our day.

I could not think of being with anyone else. You balance me and when we don’t understand each other, you try until we do. I think it is all about commitment, trust, love and trying. You do all of these things and more. You are a wonderful father, incredibly gifted and an awesome friend. Even after all these years you still scratch my back every time I ask. I love you! 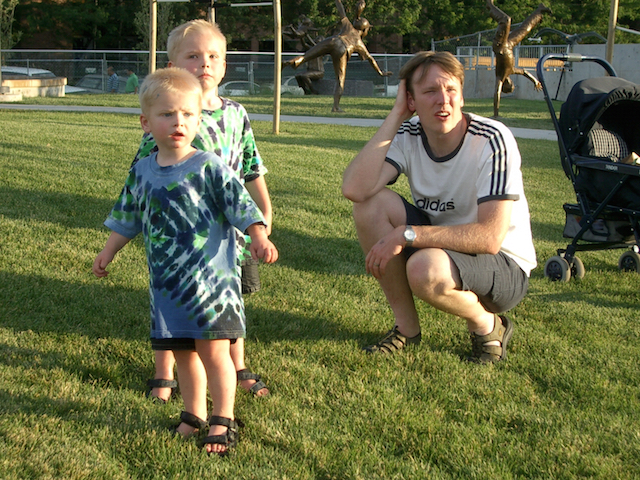 P.S. Dave just took the boys on a little adventure so I could have some time to myself. He may not remember it is our anniversary, but he just gave me a big gift.