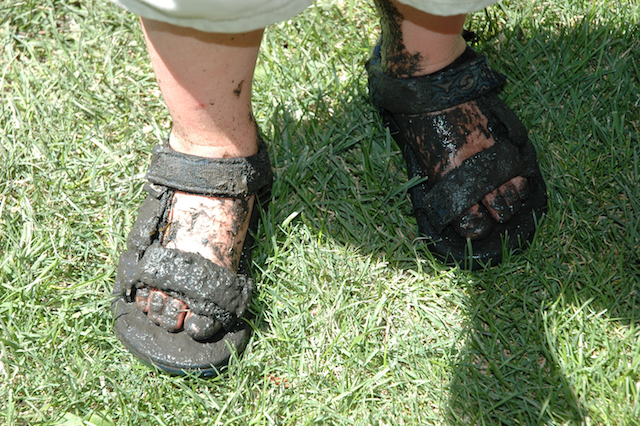 My sister called me as Eli found the only mud puddle (might I add, thick mud) in the very dry super large park just after we finished watching the Pioneer Day Parade and while Dave went to get more salt.

“Don’t you all dress up for Pioneer Day?” she asked me.

Kyle ran to see more ducks that were scattered among the 50,000 or so people as Eli sobbed, 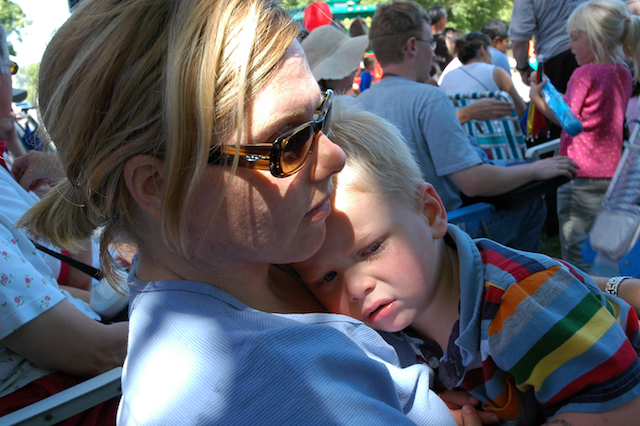 Back to the phone call, I intently responded to my sister:

“Well, I put matching shirts on the boys so I can keep track of them —  if that counts. I guess the clowns dressed up and the people on the floats, but no, we don’t dress up for Pioneer Day.”

Ok. I am exaggerating my response a bit. I probably just said:

“No we don’t dress up for Pioneer Day.”Exaggerated response or not, as Dave was still retrieving salt, I thought to myself, “The outside world must have the same view I did/do.”

A Few (typical) Utah Stereotypes — as seen from the Outside of the state:
1. Everybody in Utah is required to dress up for Pioneer Day, Bonnets and All.
2. Everyone in Utah is a Republican.
3. There are No homosexuals in Utah.
4. Women in Utah are especially good at crafts. (You know with all the quilts we are making and bread we are baking.)
5. Everyone in Utah is an extreme, non-swearing, non-caffeine-drinking and a Mormon.
6. All the stores in Utah are closed on Sunday.
7. Additionally, there are no Liquor Sales on Sunday.
(Actually I don’t think you can buy alcohol in Utah County on Sunday or in Montgomery County, but Montgomery County is in Maryland.) 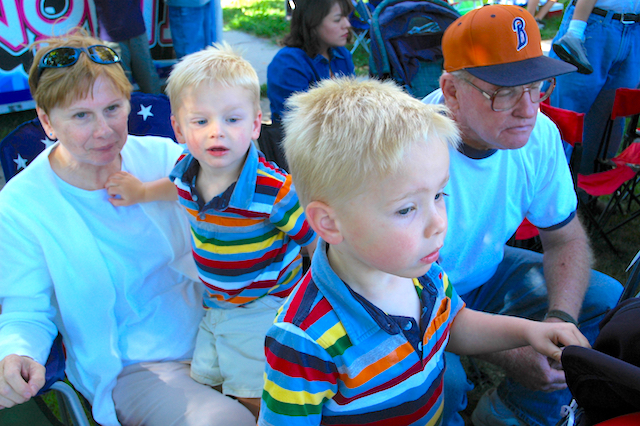 So are Utah parade’s and customs any different? After my recollection, you decide. So last night about midnight I found myself on the phone with the Delta Customer Service Agent, Umberto. Umberto had the most soothing voice I have ever heard spoken by a Customer Service person. As he made our reservations, even going as far to sense our next request, and then change the dates, because he heard Dave speaking in the background, I realized that I would have to end my therapeutic and darn right relaxing conversation.  I needed some sleep. We needed to be at the parade early to help Mom save seats. 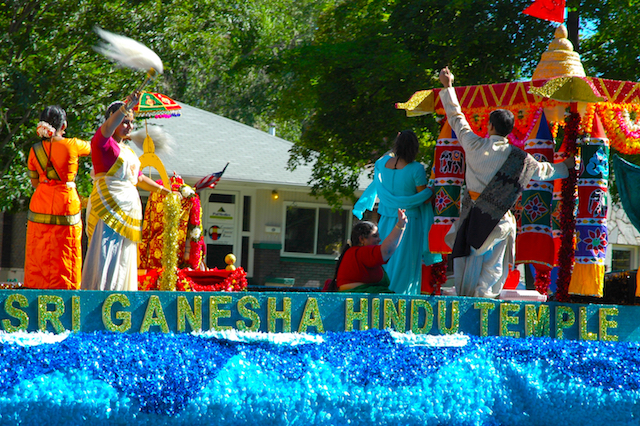 It did not matter that my Mom called at the crack of dawn. We were still late. When she came to pick up our chair, thank goodness she told me to stay home and that she would get seats for us. I had a whole forty-five minutes to relax and get everyone ready. I chose breakfast and five more minutes of sleep over washing my hair. Who cares if it has been like six days since I last washed my hair?

Because the road was blocked off, we could not make it to where my Mom and Harvey were seated. We we walked those long city blocks in the opposite direction of the parade route. In spite of their screams and urgings to get out and WALK NOW, I thanked myself for insisting on putting the boys in the double stroller.  A girl threw a firecracker at the boys (true story.) And as we walked by her, I felt a sense of pride as we rushed by and I threw her a big Angry Mommy look. 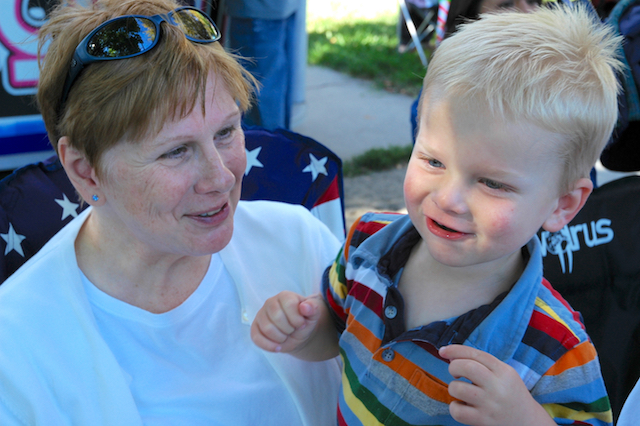 We arrived and got situated about seventeen times. Then the parade began. The cool cop motorcycle riders stopped right in front of us and did their cool cop motorcycle tricks. As the floats and marching bands passed, Dave and I kept reminiscing about the drill team championships on the Eastern Shore during our honeymoon. These sloppy Utah marching bands didn’t compare.

“And remember someone was shot at the drill team championships? And someone getting shot totally trumps Dick Nourse and the Channel Two News Team.” I proclaimed.

As I took pictures of the floats and my kids, I saw that my kids were much more interesting to look at. The anticipation of seeing such dignitaries as Bob the councilman from Murray, UT and the Copper Field Marching Band (members totaling thirty-one) couldn’t ease the onset of my A.D.D. and as Orrin Hatch passed by and waved, I could only muster a half-hearted comment,

Even our “Mystery Science Theatre 3000” back seat commentary couldn’t save us, and by float eighty-eight Kyle said,

“I am done watching people go by.” 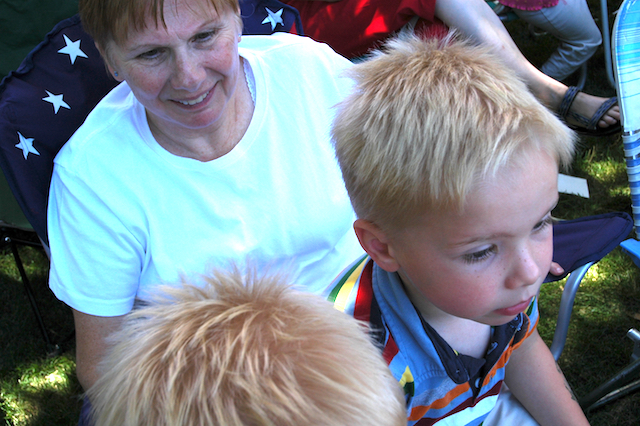 Somehow both boys settled back onto my Mom’s lap. Thank goodness for Grandmas! With my very full bladder, we made it to the end, float number one-hundred and twelve. 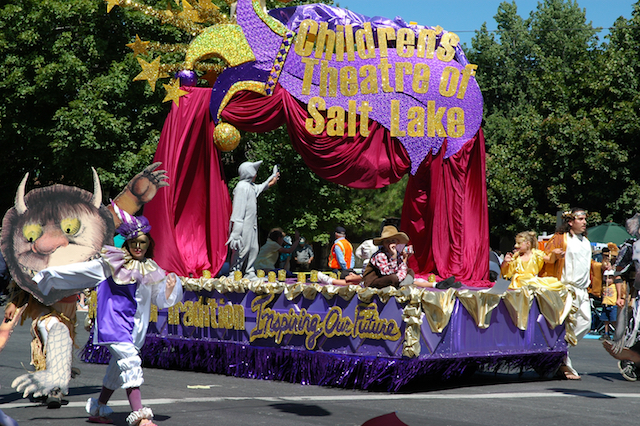 With mine and Kyle’s bladder relieved upon Kyle’s urging to,

“do something fun now,” we made our way into the crowds of people and all the vendors cooking their hot food in the 95 degree heat where my story began. 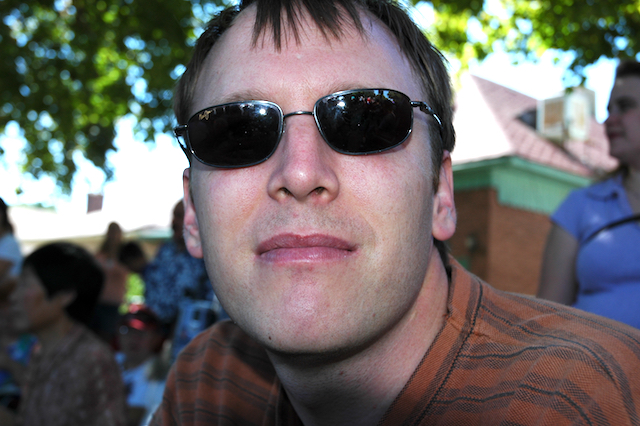 After soaking themselves in water streams, we, I mean the kids, tearfully left the park. We were actually quite happy. Sure, we are in Utah. And yes, we were celebrity Mormon Pioneers. But like the fourth of July that we celebrated on the third of July (July 4th fell on a Sunday this year), today’s parade was like any other mid-size town parade: crying kids, stepping mud and gum and corn on the cob with lots of salt.

And after such a big day and a stop to get me and the kids some lunch, we went home and all took long naps. 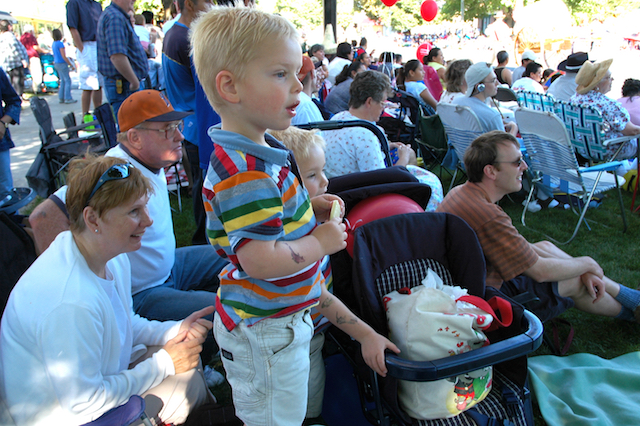 Us at the Pioneer Day Parade, Salt Lake City, Utah