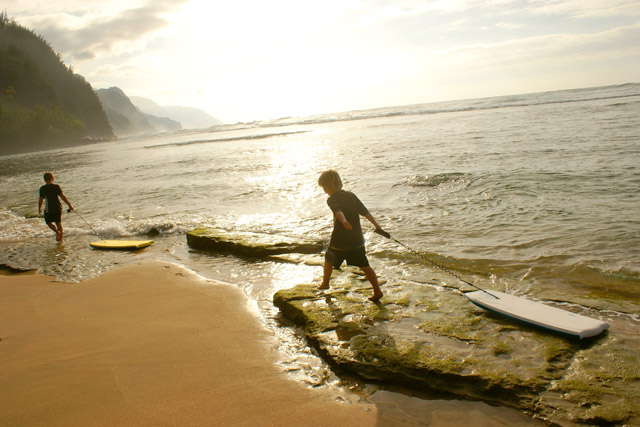 The only way to describe it is, “Out of Body.”  When we were planning our trip, I looked at the big world map. Thought about what I saw and then I looked again, staring at this tiny speck in the middle of the Pacific Ocean.  I could not imagine that this is where I was going to be. Up until then I had always stayed landlocked in North America.  Trips to Mexico and Canada were as exotic as it got.  Ok, I know Hawaii is part of the United States. To me, it seemed like I was heading to another planet.

I really wanted to get somewhere warm and sunny.  California was not as warm as I wanted in February. Arizona has no ocean and Florida is just as far away from Utah as Hawaii is.  I put aside my crazy fear of flying over the ocean and told Dave he could buy our tickets.  Because the boys were attending a very flexibly scheduled Montessori School, we decided to take an extra week.  Of course I did not sleep the night before our flight or the night before that.  The boys were set with movies and video games, Dave was satisfied with a book and I was a deer in headlights riding the Roller Coaster, otherwise known as our flight over the Pacific Ocean.  Supposedly the turbulence was particularly bad this time across.  Now, having flown several times over the Pacific Ocean, I can say it is always a turbulent flight. As I walked to the bathroom the turbulent bumps threw me into another row.  I felt comfort in the fact that the woman I landed on looked as scared as I did. As the plane dipped down and then jerked back up I made my way, grip by grip to the bathroom.  I sat in that tiny stall and prayed. Sweat dripped down my face and I prayed some more, willing myself out the door.  Upon exiting the stall I noticed the male flight attendant sitting strapped into his jump seat.  I asked him, “What is up? Is it always this bad? Seriously? This really sucks!”  He gently explained physics and engineering and told me how many times he had flown over the ocean and how much force it would really take to crash.  He made me feel a little better, better enough to safely climb my way back to my seat. Truth be told, I should not have gotten up, but I really had to pee.

I took a Benadryl and drifted off.

There it is was, the tiny speck of land surrounded by water, the tiny piece of land I had seen on the giant world map.  It was evening and I was in a Benadryl fog. We landed in Oahu and made our way to our Oceanside hotel where we were met by the concierge who promptly gave the boys a cool ocean print backpacks filled with all sorts of goodies.  We were offered a cookie and checked into our room. After dropping off our luggage we promptly took the elevator back to the ground floor and made our way out to the ocean.  I looked at the Ocean. Then I closed my eyes really tight and looked at the ocean again. I grabbed Dave’s hand and held it tightly. I honestly wanted to make sure I was not dreaming. I looked at the ocean and closed my eyes tightly again. Breathlessly, I held onto this moment, this feeling. We were in the middle of nowhere and I felt like I was in the middle of a dream. I kept saying, “Can you believe we are really here? Can you believe it? Look?  It is so beautiful.  Look! We are surrounded by water! Look.”

We have been to Hawaii three times since. We have visited other islands and nothing will ever take away that very first hazy, surreal, amazing moment.

These moments are why I am so in love with travel.