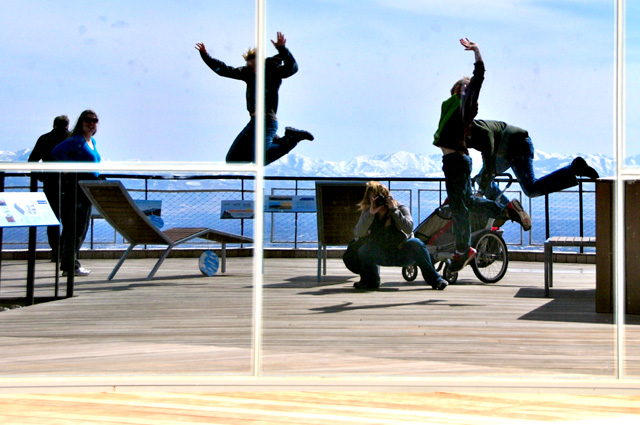 Can we make a difference? Does it matter if we speak up? Will people reject me for owning who I am; even when who I am doesn’t fit into one particular space? Will people reject me because I think differently than they do? Probably. No. Some definitely will. Some already have. I have spent a good percentage of my life trying to figure out where I fit in. I know how I feel. I have strong opinions. To make it easier for everyone, I try to understand and define my beliefs even though my beliefs sometimes change. However, what I realized long ago is that I do not think that I fit into labels and I actually get annoyed when I am only defined by another person’s label. I struggle to know what to do about my “on-the-fringe”-ness.

Most times I keep my mouth shut. Even with family I try to remain quiet. Trying to shove my differences down my mother’s throat just doesn’t work. Talking religion and politics can alienate and often hurts. More specifically it seems like habit to judge others based on the labels our world assigns us. I am not even sure if this is a bad thing or not. We put people into boxes and then bias them based on those boxes. We read the bullet points on a topic and are often too busy to learn the “whole” truth. Currently in our busy, super busy and overstimulated world it seems like it is too much effort to see past those labels, boxes and quickly-digested bullet points, doesn’t it?

Yay for this past weekend! Because of a decision, I felt hope; hope that opening your mouth does work. I think the state of Utah took one for the team, moved past judgements and did the right thing. People from all sides of the fence worked together and for that, I am grateful!

On Friday Dave and I were sitting at another restaurant, a restaurant where he was able to use yet another Free-Birthday-Meal coupon. Yay Dave! While he was looking something up on his iPhone, I fired up mine. Yes, this is how we roll. Because I like the news, I opened a news site and saw that Governor Gary Herbert vetoed HB363 with the following statement:

“Existing law respects the ability of Utah parents to choose if and how their student will receive classroom instruction on these topics,” Herbert said in a prepared statement. “I am unwilling to conclude that the State knows better than Utah’s parents as to what is best for their children.”

I texted a friend, who had been at the VETO HB363 Rally and asked her if she had heard the news? She had and was also double-checking just to make sure it was “really” true!

Upon reflection, opening my mouth was simple and I do not know why it has been hard to open my mouth before. (Wait. I do know why it has been hard). Nevertheless, I opened my mouth, because this is what vetoing House Bill HB 363 meant to me. “It meant that the legislature was using a clumsy, transparently religious justification to remove my choice as a parent about what my kids would be able to learn in school. And even though as a parent I’d like to think I would be able to fill in, I’m sure I would miss something, or my kids would be unable to listen to me out of pure mortification. And more, I know from experience that there would be a lot of other kids that just wouldn’t get the facts at all. And I just couldn’t keep my mouth shut.” I sent that quote to Joanna Brooks, who is national voice on Mormon life and politics, an award-winning scholar of religion in American life, and author of The Book of Mormon Girl: Stories from an American Faith. Then she used my quote for her post at Religion Dispatches.

Before giving Joanna Brooks my quote, earlier last week I signed a petition organized by Paul Krueger, and feeling inspired by Paul and others like him, I wrote a blog post. I emailed Paul, working together to support this cause, he linked back to me. All of this because we opened our mouths. We opened our mouths together. The VETO-HB363-snowball was rolling fast and our voices were making a difference. Living in such a religiously polarized, religiously conservative and politically conservative state often makes me feel like I should keep my mouth shut. I often feel my words and thoughts do not matter. I am grateful for the thousands of people on all sides of the fence, embodying every label you can imagine, who remind me that opening your mouth can make a difference. We stood together, ignored the short and scary sex-is-evil-before-marriage bullet points and opened our mouths.

By Friday, March 16, 2012, Utah Governor Gary Herbert had vetoed HB363 and I felt hope; hope that even in this crazy and overstimulated world, our voice can make a difference, especially when we work together and unite the sound!