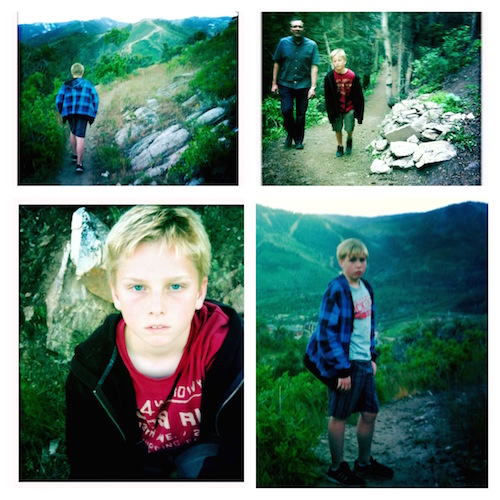 We LOVE our tired  boys muscling their way up and down Rob’s Trail, Park City, Utah

You may have noticed that my title begins with the word “hiking.” Indeed hiking/walking may be my very favorite aspect of travel/exploring. Today I am going to tell you about one of Park City, Utah’s very best hiking trails, a trail that leads into one of the world’s best trail systems. That being said, if you take anything away from this post, please take this: Explore. Hike. See. 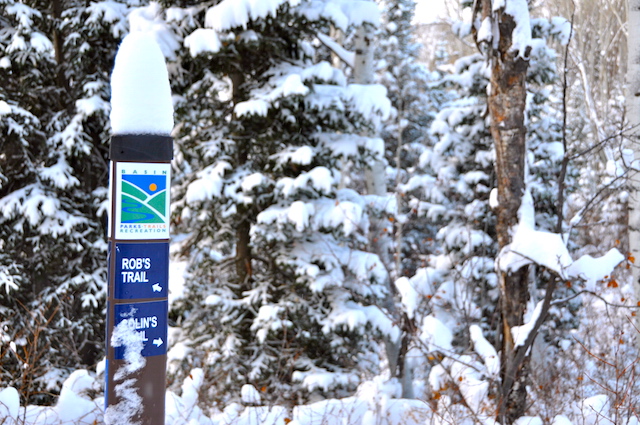 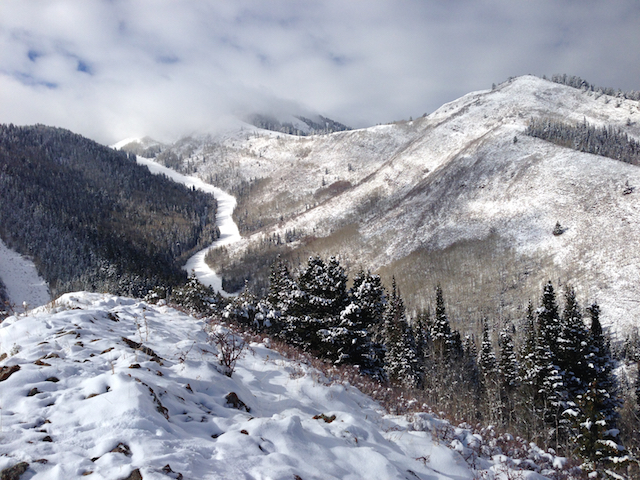 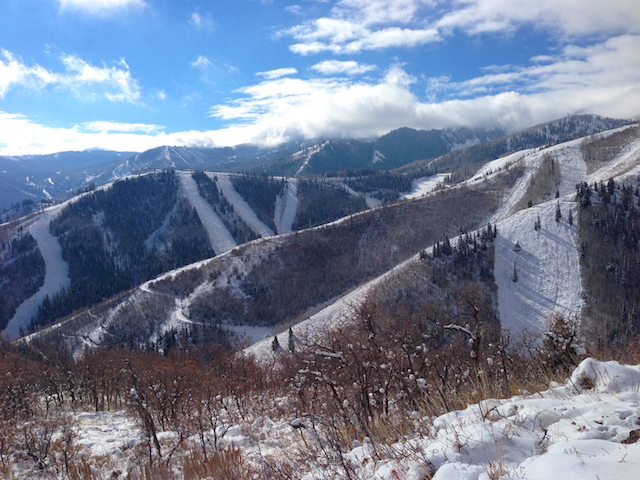 Dave and I have always found a way to hike, walk and move. Daily walks to our local Sugarhouse, Utah neighborhood Starbucks and Einstein Bagels were a must. And when our son, Eli was no more than three, he brilliantly uttered the phrase:
“I am too tired for walking.”
I am certain we were on an ambitious hike like Arches National Park’s Delicate Arch (but more likely it was while walking in our local neighborhood). Our need to move has not stopped, and until recently, Eli’s I-am-too-tired-for-walking sentiment has not waned. Nevertheless, as too-tired as he was, he did (walk, that is). So when we learned that the home in Park City we were building was literally in the backyard of some of the world’s finest hiking and mountain biking trails, we knew we would find a way to urge our tired little walker on. 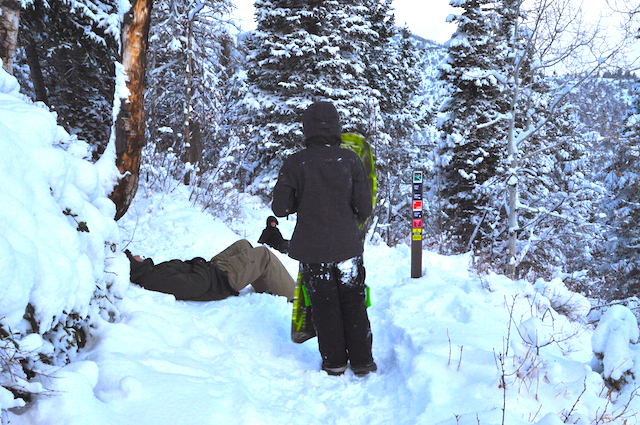 Thank you, Rob’s Trail! Eli’s love of Rob’s Trail came in the winter, actually. It was Dave’s idea, and it was sort of a trick.

See, Dave is an avid mountain biker and was already familiar with the Park City trail systems. One winter day he strapped his Yak Trax on and hiked up Rob’s. An hour or so later, I looked out the window at just the right moment to see Dave walking in the gully up to the right of our yard and carrying something.

“Wait. I thought he was hiking Rob’s. Why is he coming from the other direction?”

I ran to meet him.

“Beth, I hiked up Rob’s. I had no idea if it would work or not. I had to bushwhack a little, but sure enough you can hike up and then sled back down. The gully comes right through our yard.”

The boys were eight and six when Dave shared this news.

“Boys, grab your sleds. I found the best sledding ever!”

We quickly dressed in our winter gear. We each grabbed a sled. And of course, little Eli had no idea there would be a lot of walking before there was any sledding. Yes, he was indeed too-tired-for-walking. Nevertheless, we ALL made it. We hiked up Rob’s Trail and took a left when Rob’s meets up with Colin’s trail. We hiked a few hundred yards, and when we saw the little canyon/gully,

Those first few runs were so slow, and yes, there were large sticks, crazy dips, and unsuspecting rocks in the way. We eventually packed the snow down into a sort of toboggan run, and our boys continued to be tricked into walking up Rob’s so we could sled. It did not matter. The boys loved it! Not only that, I rarely ever had a problem convincing Eli to hike Rob’s. Soon after that Dave and the boys used Rob’s as a way to ski home from the Canyons Ski resort. Seriously, it was the craziest thing to drop them off, and then hours later see them skiing into the back yard. I loved it! 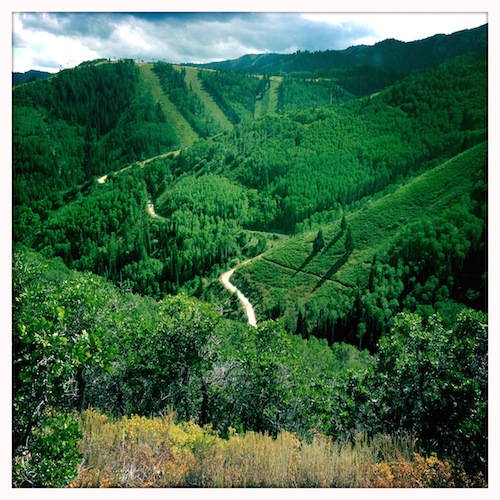 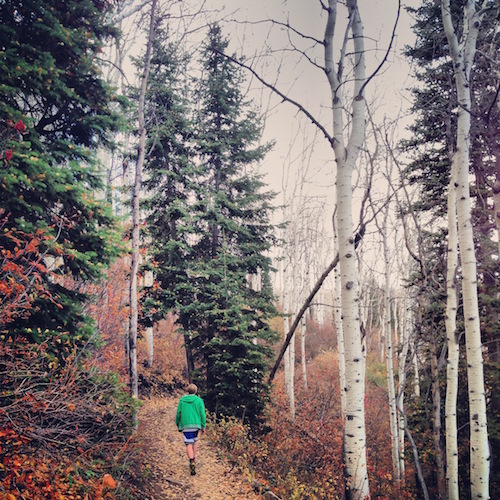 Selfishly, I like to think of Rob’s as our own. We used that trail all year round.During times when Dave and I needed a walk-talk, there was nothing like Rob’s, its beautiful Aspen forest, and stunning mountain views, to clear the head. In the summer we hiked it as a family. I often hiked it with my lovely hiking ladies, Eileen, Christy, and Stacie.  At other times I would drag my  bestie, Beth (no not my inner self, but I totally wish…) up the mountain so we could deconstruct our world. I love that my friend MB hiked all the way up Rob’s in flip-flops.  Probably my favorite was when I would be hiking and somewhere along the trail I would run into Dave, who was  biking. We even took our friend Markus, our owl specialist, to look for Flammulated owls there. And yes, we found Flammulated Owls higher up, right off Rob’s trail. 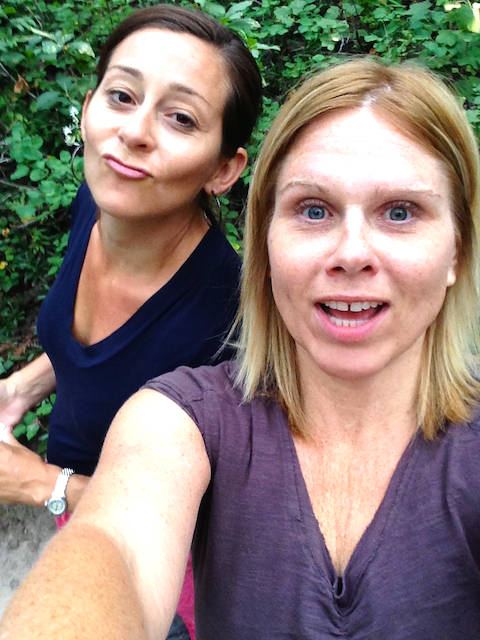 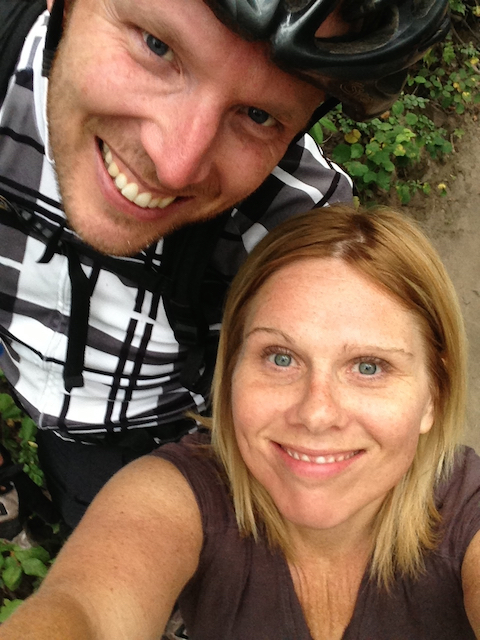 Running into Dave on Rob’s Trail, Park City, Utah — he was on a mountain bike ride and I was hiking with my friend, MB!

Today I share Rob’s with you. I know I am not the first to share. Rob’s is popular, well-known, and well-loved. It is also our little piece of heaven!

Rob’s Trail is a hiking/Mountain Biking trail that feeds into the Mid-Mountain Trail. “Park City’s Mid Mountain Trail bisects the Wasatch Mountains at 8,000 feet—earning it the nickname the ‘Eight Thousand Foot Trail’—and cuts across Deer Valley Resort, through Park City Mountain Resort and The Canyons Resort.” Rob’s connects with the Mid Mountain trail on the backside of the Canyons Ski Resort. You head up Park City’s Bear Hollow Drive. When you hit the horseshoe bend (about 1.1 miles up), you will see a cul-de-sac with four houses. Ours was the sage green one on the right. Just a few feet past the cul-de-sac is the parking for Rob’s. You cannot miss it!

Rob’s is also a popular snowshoeing destination. In truth, after each snowfall, the early morning snowshoers packed it down enough that neither snowshoes nor Yak Trax are necessary until you get many miles up the trail or head off trail into the untracked backcountry. We would just throw our Sorels on and get walking. Sometimes, if you veered off the center of the trail, you’d end up sinking in to your knee or thigh (it’s deep up there), but you just dust yourself off and keep walking.

And of course the Trail Runners love Rob’s for its accessibly.

As Far as sledding goes. I hear there are spots that do not intersect into people’s yards. I also have friends who sled down Rob’s on cardboard during the summer.