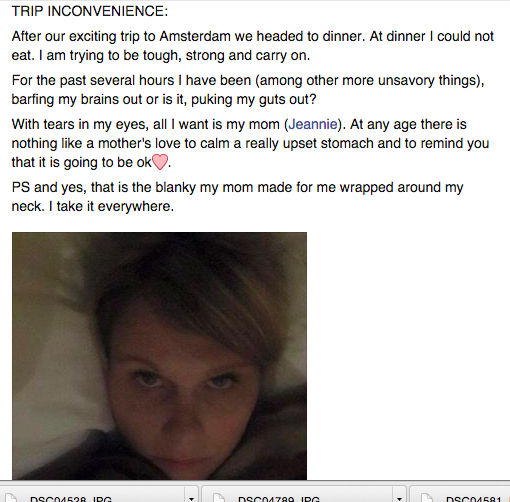 Vomiting in Amsterdam written the night I became sick

After another crazy train ride, and a confusing exit from the train station, we were in Amsterdam. Our Amsterdam friends were excited for us to see their beautiful city. We were excited to ride bikes, and likewise see all the bike-riding people we had heard about.  We wanted to see lovely Dutch architecture, look for cute little wooden clogs, and see the town (large city) our friend, Raquel, had recently visited. The bad hotel bacon I ate earlier in the day (and in Belgium), on the other hand, was less enthused. Truth be told, I think I knew the bacon was bad. My fate was sealed at the Antwerp Belgium Radisson Blu’s breakfast buffet. I ate the bacon the day before and was fine. Unlike the day before, however, this time the large bacon container was nearly empty. Somewhere inside of me, as I looked at that that last discarded, rubbery, and grayish-looking piece of bacon, I knew I shouldn’t do it. I knew I should not scoop up. My hunger took over and I ignored that very wise voice in my head. Come on, the bacon was sitting in a pool of grease.

“It can’t be that bad. All that grease is probably protecting it. I will be fine.” I thought.

Still unsure and now at the table, I picked up my piece of bacon and convinced myself I would simply eat around the grey so I did. Then I do what I often do, (which I should have done before taking a bite). I performed the if-Dave-doesn’t-drop-dead-while-eating-said-food-then-it-must-be-safe food test.  (Please don’t tell Dave).  So I placed the grey part of the bacon on Dave’s plate.

I have never seen this reaction. Dave was not eating the bacon. Instead, he picked it up, looked at it, and tossed it aside.  I was too late. I should have known. For hours, I felt fine. I moved on to train travel, yummy Belgian chocolate, forgetting all about the bacon. 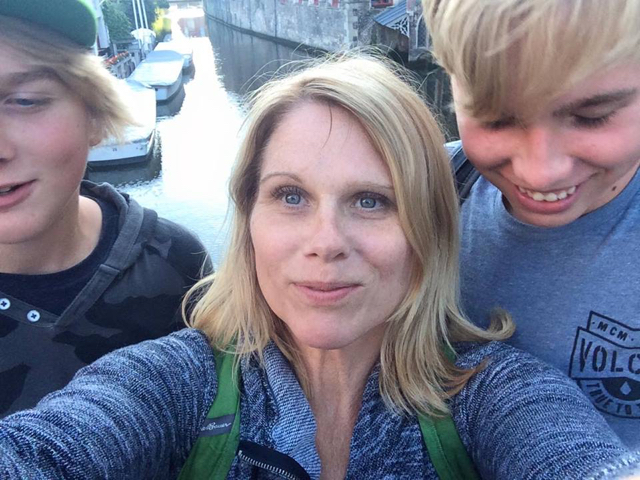 Bruges, Belgium: Twenty-four hours before full barf meltdown. I had no idea what was going to happen.

So there we were walking through Amsterdam’s Red Light District (a Google miscalculation, I might add). I was fine, except for being mortified that Dave and I had walked our two teenage sons through this depressing and weird part of town.

You know how really bad food poisoning goes? A switch flips. And from one breath to the next you go from “let’s get our boys away from all the prostitutes in the windows” to “I think I am dying.” With me it was between the hey-I-am-starving-lets-go-out-to-dinner to the if-I-do-not-leave-this-restaurant-now-I-am-going-to-projectile-vomit-all-over-our-table. Yelp gave our Malaysian restaurant five stars. Understandably, I have no opinion.  I cannot even remember the name. Wait. I do have an opinion. Belgium and The Netherlands, seriously, please get with the program. Let people order “tap” water, or at least have fair priced bottled water. The Netherlands has some of the cleanest tap water in the world.  Letting my boys drink crazy Malaysian “root beer” or whatever local delicacy is available at every meal is not healthy!

Dave took us to the Malaysian restaurant knowing there would be something there  I could eat, and that something was my very favorite yellow curry. The curry arrived at our table in all its yellowy splendor. I took one bite. The fish sauce smell nearly killed me,  and had to stop. Sadly, I relinquished the yellow curry and was left muscling my way through a last hope for my angry stomach, a bowl of white rice.

“Rice will calm the angriest of stomachs.” I thought.

Wrong. I could not do stomach (literally) another bite.

Weakly I exclaimed, “Dave, I need to leave!”

At that, Eli offered to go, and he and I left, and walked the two blocks back to our Radisson Blu Amsterdam hotel, which was a lovely hotel, I might add, except for the pee water smelling toilet bowl, a toilet bowl, I know now too well.

Eli was a sport. He knew his mom was sick, and he made sure to return me safely to our room. Inside, I felt that seasick feeling one can only feel on the sea, or when feeling really sick. All I could do was drop down and lay myself on the floor. I can only imagine how many strange and naked feet have stepped on the carpet where my head now lay. In that moment, all the strange and stinky naked feet I was laying my head on did not matter.

“I think I am going to puke!” I screamed.

I thrust myself up and ran to the bathroom.

And like the beginning of a very clichéd song, which I will title: Diarrhea and Vomit, I found myself sitting on our hotel room toilet. And like that the familiar tune, as I sat on the toilet, of course I had a sudden and an excruciating urge to throw up.  Doesn’t it always go this way? Amsterdam was no different. Sweaty and panicked, I grabbed at both the toilet paper and the trashcan. A quick and thorough wipe later, I was kneeling to the porcelain throne. I honestly thought I was done after that first go round. And perhaps the blessing that cognitive dissonance gave me is that I really had no idea what the next forty-eight hours would bring. Oh, thank God!

As I was getting further acquainted with our hotel room toilet, Dave ran into the room screaming,

“Beth, Beth, do you have any euros? The restaurant only takes cash! I left Kyle there until we pay.” (Yes, this really happened.)

“Find my wallet. I have some cash.” I said in a surprisingly calm and attentive voice.

I heard Dave rifling through my wallet. “It is not enough. We are three euros short. Do you have any more?”

“Eli, do you have any euros?” I asked between heaves.

Dave continued,  “I need to find a cash machine.”

Barfing in Amsterdam: The “allergic” food poisoning caused my face to get really red and puffy.

I cannot believe how sick I was. My saving grace was this: I knew I had between two and ten minutes of calm after each vomit episode. I embraced those peaceful moments when I could reach out to friends and family on Facebook. I will tell you what: Social Media is a savior when you are alone in a foreign country. Do not hesitate to reach out. During one of those reprieves, I was messaging my sister. I likened my bacon food poisoning to the time I ate a moldy bagel. As a result of eating the moldy bagel (I thought it was blueberry and yes, this is a true story), I had both black vomit and diarrhea. My sister, Brenda, was living with me during the blueberry-bagel ordeal. When we were messaging I said,

Our room, which was a strange sort of family room,, had three twin beds. One of the twin beds was separated by a wall. In the moments before I became sick, I had ideas of mommy daddy time [cue Marvin Gaye’s, “Let’s Get it On,”] so Dave and I slept in the lone twin bed. For some reason I decided to sleep on the inside, next to a very cold cement wall. Dave and I slept this way during my entire round-the-clock-vomit cycle. Here is how it would go. I would wake with a painful urge to throw-up. Before I could get out of bed, I would begin to throw-up so I would power through, holding the barf in my mouth while grabbing onto the blankets I would use to power thrust myself out of bed. Then I would throw my body forward, land on the carpeted floor, and I would run to the bathroom. Dave and I still wonder why I did not move to the outside.

Truthfully, most of the time as I cried, I spent hovered over a pillow on the floor. While Dave and Kyle went sight-seeing with our Dutch friend, Thom, Eli remained by my side. Go Eli! I tried to drink water. I tried to drink the Dutch version of Ginger Ale. Nothing would stay down, not even ice chips. My friend Amber, who is a Physician’s Assistant, coached me through long distance. Thank you, Amber!  Again, I would argue that in these moments you take advantage of social media. I could not have done this without her. Finally, between Amber’s advice, and the fact that nothing was staying down or in, we opted to seek medical help. The hotel made me an appointment. Our Dutch friend, Thom, who was visiting us, helped translate. He also accompanied Dave and I to the doctor. The whole experience was scary.  We think the doctor was Italian. Her Dutch and English were less than ideal. At one point she turned her computer screen towards us, handed Dave her keyboard, and asked us to Google the medication. She sent me away with two prescriptions, and an admonition to go to the hospital if I didn’t feel better in the next few hours.  Rehydrating was up to me, which freaked me out. Here in the United States, a doctor would give me an IV in their office. I am not sure who is right. I just know the Dutch do it differently and that left me uneasy. Consequently,  I left feeling weak and afraid. As I stood outside of the doctor’s office I looked around at row houses along the canal, the canal boats, and people on bikes. There were lots of people on bikes.

I love to walk and for a millisecond we considered walking to the pharmacist.  That was the hardest moment. I am strong and always able to walk. Realizing that I had lost my strength was terrifying. We called a cab, and made our way. Dave and Thom left me with the sweet, grandfatherly, cab driver while they ran to the pharmacist.  The sweet cab driver tried to speak to me in English. Nothing was translating. Finally he said, “women problems.” I said, “I wish.” Oh yes, that is the super surprise to this story. Not only was I sick, the cab driver was correct. I was also having women problems. Geez!

We parted ways with Thom. Then the cab driver took Dave and I back to our hotel. Thankfully, I began to keep water down, and started to regain my strength. Being sick away from home was terrible. I do not recommend it. I also think you can probably be more prepared than I was. No. You do not need to be neurotic, just careful. 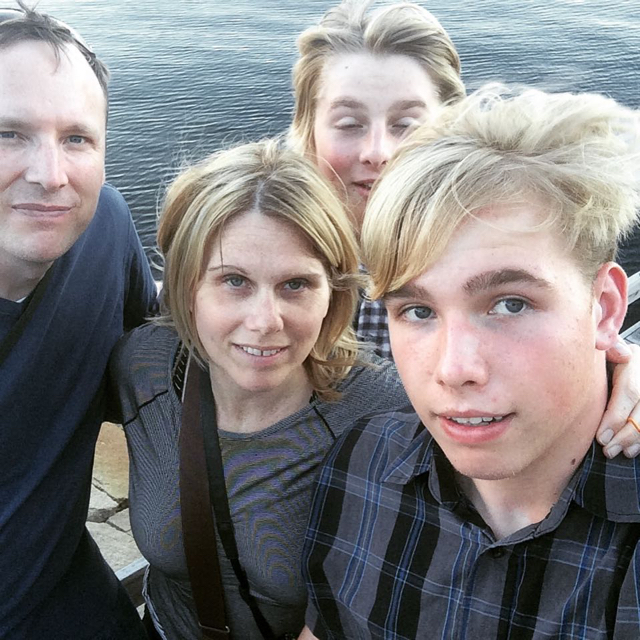 The doctor sent me away with a note recommending that I skip my flight to Sweden the next day. Thankfully I did not have to. And yes, as of today, I prefer Sweden over Amsterdam. I think you can understand why.

In the end, horrifically throwing-up non-stop in Amsterdam was not part of the plan. As such, a long, and well processed view of our hotel room bathroom, the curves of the European-styled toilet seat, the clever print (including Danish clogs, and fruit, I think) of our hotel room carpet, a Malaysian restaurant, the doctor’s office (located in an old canal building),  a friendly cab driver, and the outside of Amsterdam’s Prostitute Museum, may not make for the most fair or accurate Amsterdam review, or maybe, my Amsterdam experience was spot on [wink, wink].

Amsterdam seen through my hotel window