Forward: This has been week filled with heartbreaking news. Monday evening, February 1, I began this post.  At the time I did not know that our most awesome friend Steve had died, or about the sudden illness and passing of my mom’s and Harvey’s sweet and beloved, grandson, Nick.

Dave, Kyle, Eli and I wish both of their families much peace now as they move through their grief.

…I also  want to thank Melissa, Steve’s wife. You have graciously allowed us all to share our feelings, photos and thoughts. Thank you, my friend!

Melissa’s words: “I say share away if it makes you feel any less pain.” 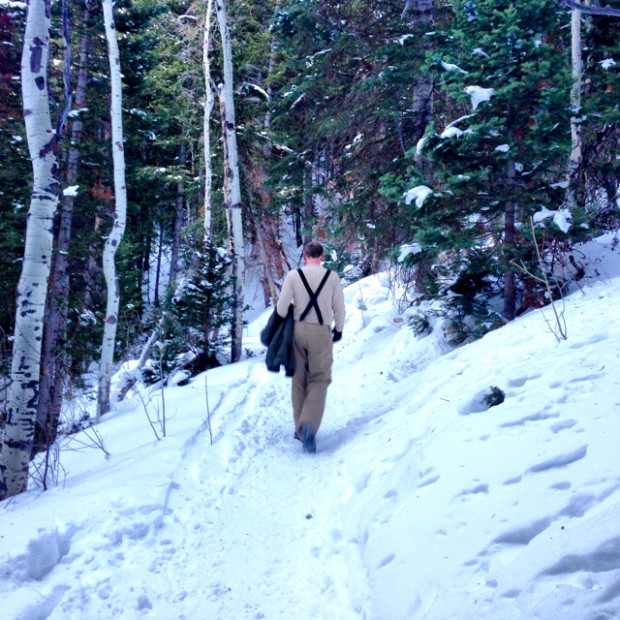 Rob’s Trail, the back side of the canyons Ski Resort, Park City, Utah

The following was written Monday, February 1, 2016:

Right now my thoughts are an anxiety-induced brain-coma of disconnects, intentional denials and lost trains of thoughts.  I am certain my brain coma is a result of our current living reality:  Our new home is covered in a mish-mash of unpacked boxes, unfinished construction, doors that need paint and door hardware and a toilet that need installing. I am certain my circuits persist in shorting because of things like the large, bright green, trash-filled dumpster in our driveway. Each and every time I go to back up, I literally forget how to back up.

“Do I turn the wheel to the left or to the right?” I ask and yes, out loud.

As I inch my way past that green monster, I am certain I will smash into it, or at least rip off my side mirror. Adding to my brain dumpster-PTSD is the part where I feel completely and totally emotionally exposed. Of course we are in a new neighborhood. It is a place where houses are close together and there are new people to meet and new people who will judge me.  Vulnerable indeed. Facilitating  this exposed vulnerability is the fact that our giant windows need blinds!  And here is why: Often it is only until I am well into our well-lit kitchen, which houses a very large, uncovered  picture window, that I look out at the dark outside while standing in the bright inside that I connect the dots.

“Beth, run! Hide. YOU ARE IN YOUR UNDERWEAR!”

No. It never occurs to me to turn off the lights.

In truth, new-house living is a gift, and the fact that we have this giant trash can at our disposal is super cool. Why I think (know) my brain is in a painful fog is the reality that  as each moment passes, my time raising these amazing boys is growing way too short.

Consequently, whether a moment is soul-crushing, over-exposing, disconnected, boring, or ultimate glee, I always, always, always want to push the pause button.

“Why can’t I hold all the moments a little longer? Why?”

Ok. I know the answer. If we stop time for me, we have to stop it for everyone, and if we stop time for people living now, it would not be fair to all those who have lived before us, (and yes) or those who will live after us, or some other inequity I have not considered.

Nevertheless, damn you, Time! I want you to stop, at least pause long enough for me to catch my breath (or back out of the driveway without smashing my car).

And Time, if you will not stop, or even pause, perhaps you will slow down long enough so I can find a way to hold on. 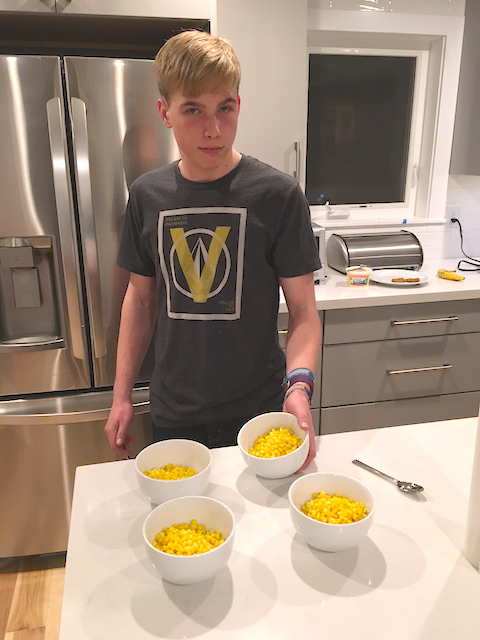 Kyle and our dinner 😉

Here is the moment I am now in: I need to go grocery shopping – bad. In fact, I just placed two bags of frozen corn in the microwave.  Yes, I am calling two bags of frozen corn dinner. As I type, I am sitting at our new kitchen island. Music is playing. The boys are milling around me.  I ask Dave about my new ski boots. I bought them earlier today.

“No. I brought them into the garage.” Dave responds.

We eat our frozen corn (dinner). I read out loud what I have written so far. As I read, Dave walks to the refrigerator, pulls out a package of tortillas, grabs the cast iron pan, turns on a burner and says,

“Anyone want a burrito?”

The boys start watching YouTube.  I say,  “Is that a Fail video?”

In unison (and by unison I include Dave), they respond, “It’s a Win video.”

Eli does not want beans in his burrito. 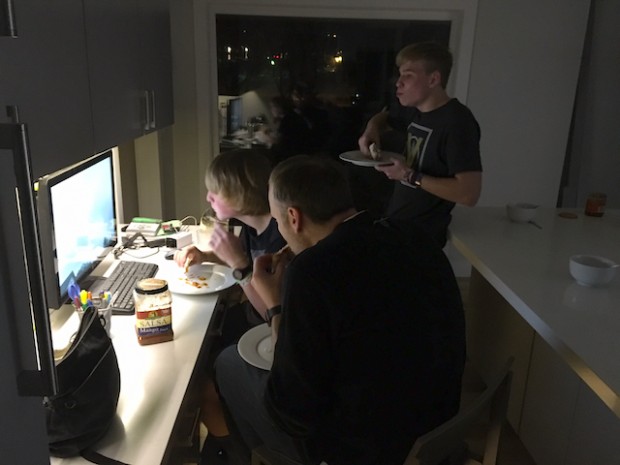 As the boys watch their video, Eli says,

“What kind of speaker is it?” I ask Dave.

Both Kyle and Dave answer,

Kyle sings along with the Avett Brothers, “January Wedding.”

Dave affirms, “Ok, Eli, I am giving you a minimal amount of beans.”

To which Dave insists, “You won’t even notice the beans.”

All this bean talk takes place as Kyle sings,

“In January, we’re getting married.”

Then he flips his burrito-dilla.

Dave asks,  “Eli, do you want tomatoes on yours?”

Quesadilla-crisis averted, I hear Dave say something. It takes a few seconds to realize that he is actually talking to me:

Before I can answer, Kyle looks at Dave and says,

“Ok. Dad. I am going to make the ultimate, ultimate burrito.”

“Maybe it’s the penultimate burrito. Maybe it is the last before the last.”

Instead of giving Dave an answer about the grocery store I say,

“A penultimate burrito? What? What?  What?”

Because Eli is still watching YouTube “win” videos, he offers this most excellent non sequitur,

“He duct-taped it to his feet.” 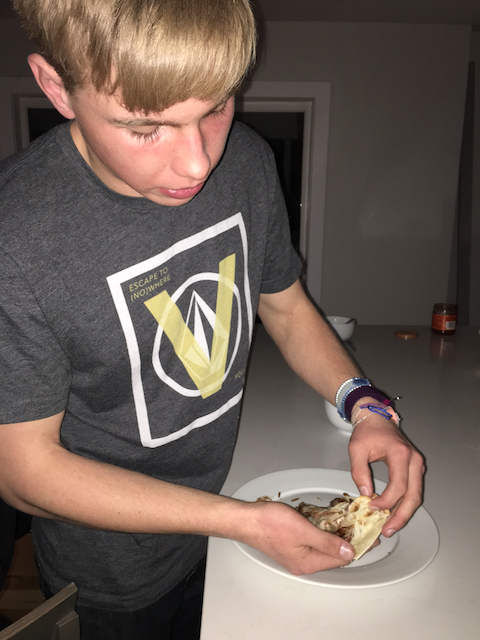 Kyle is finishes cooking what is now a burrito, walks over to Dave and says,

Eli walks to the freezer and asks,

“Let me know if you want to go to the grocery store, Beth.”

Now at the store, together, we walk the aisles. Then we separate — me, for butter and yogurt, and Dave for ice cream. We reconnect, pay and leave. 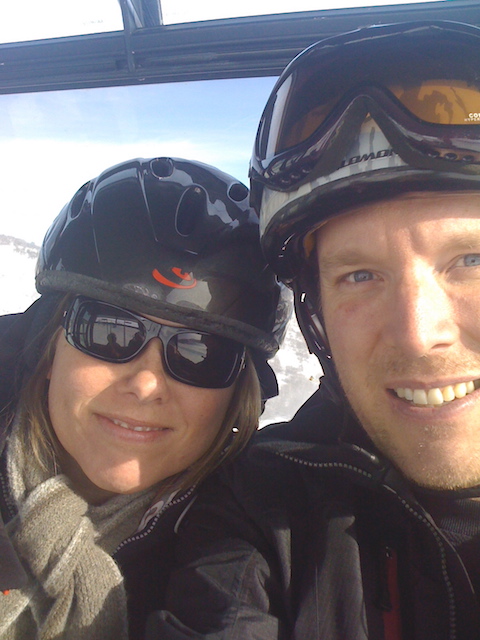 Dave and me, The Canyons Ski Resort. One of the last times I went skiing.

On the way home we talk about my new ski boots.  I am certain Dave does not realize how terrified I am to ski now.

Ok here is the background: Years ago I tore (nearly severed) this muscle in my leg/foot called the Peronus Longus.  The muscle runs down the calf, wraps around your foot and connects in between the big toe and whatever you call the toe next to the big toe. And if you ski, you know that you need to be able to work your big toe and that toe next to it to turn your boot in your ski. I healed and even got special ski boots that were supposed to make it easier.

I remember the moment. I was in my new ski boots, and was on the steepest part of Saddleback (Canyons Ski Resort Blue run).  It was the end of the day and the run was hard ice.  I kept slipping and sliding as my boys skied past me and urged,

It was then that I  realized that in those slick conditions, I could only turn to the right. I was confused and trying to work out how I could get down the mountain on right-turns only. I made my way to the edge. I stopped and began taking my skis off. I was convinced that I could just walk down. When Dave realized what I was doing, he emphatically stated,

“Beth, you cannot walk down! It is not safe. You need to ski!”

I stood there — immobile. It was cold, dark and the mountain was closing for the day. My friend, Jodi, whisked by and offered to ski all the kids down, (her three and my two –yes, she is a saint).  Dave remained, steadfast in his resolve.

I was embarrassed. I was terrified. After many painful moments, Dave slowly coaxed me down that mountain.

I have not been back, skiing, that is.

Now years later, with my special ski boots stolen (which I have used as a reason not to ski), and my crazy foot rehabbed, Dave sensed it was time.  So on Monday morning, February 1, Dave declared,

“I am taking you to buy new ski boots today!” 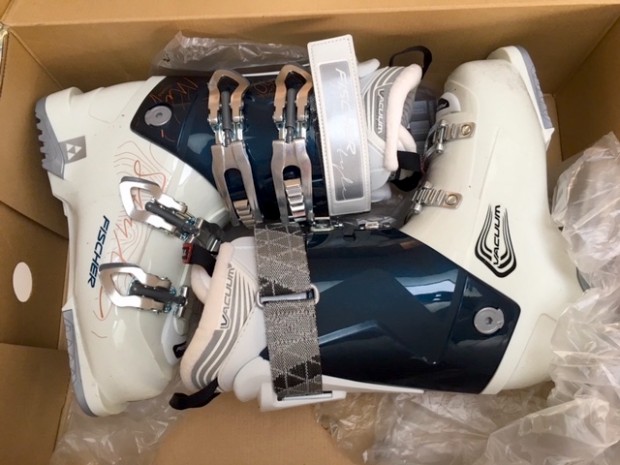 My new ski boots. I will call them Steve.

I will admit had no interest in buying new ski boots. Come on, I have better things to do, right? There is a house to unpack and a toilet to install!

Dave would not accept my excuses. We made our way to our local Level Nine Sports,  spent hours trying on ski boots with Christian, the very cool former ski racer from New England. Apparently the Fishers with an insole stabilize my foot. It felt like a Christmas miracle. My fear washed away and my trust came back because as I stood in my new boots, I connected.

“Dave, I can turn my foot!” I exclaimed! 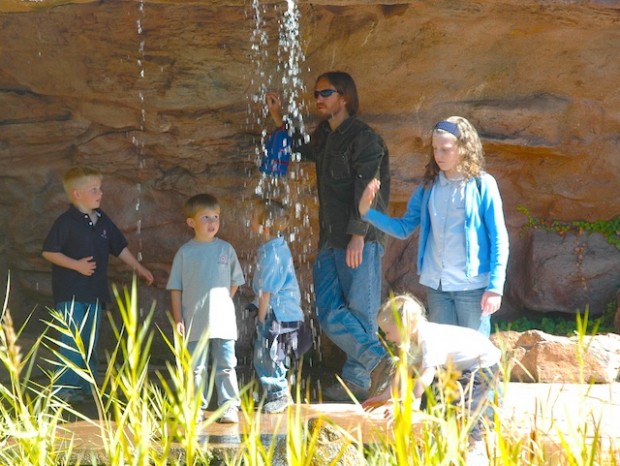 There is Steve hanging with the kids (like he always did). We love this photo because Eli is so excited to talk to him.

Afterward:  Of course I did not know Steve was killed in an avalanche on Sunday, January 30. Search and Rescue would not find his body until Tuesday, February 2. It was not out of the ordinary that as I tried on my boots my thoughts and our conversation leaned in the direction of our friend, Stephen Jones.  Steve impacted a lot of us. He was bold, outspoken and fearless. He loved the snow, winter and skiing.  Most people had no idea that I was so afraid of the snow. Steve noticed. So way back when I injured my foot, he repeatedly insisted I contacted Alan, Miss Diane’s magic carpet guy so I could rehab my foot and  “safely” get my confidence back.  His caring was also married with a lot of opinion. Consequently, for years, Steve pestered me about not loving the snow. I honestly think he got a thrill out of harassing me.  Mostly, I am certain he was convinced that he could win bring me to the snow-loving side.

Today I struggle with how to articulate moments, time, loss, and the impact others have on us. Oddly I was struggling a lot Monday (before I knew about Steve or Nick).  Loss, time-stopping, and moment catching consumed my thoughts.  During the week, my friend Beth (who also knows Steve) and I were talking about the impact others have on us. She mentioned tapestries and threads; and how each of us are threads that are woven together. Once connected, we ripple through each other’s lives. These ripples create things like the need to buy new ski boots out of the blue.  As we talked I started thinking that maybe these ripples are the way we stop time.

So right now, and after a very sad week,  I would like to think that as Steve left this world, the moment he left me is February 1, 2016, the day I bought my new ski boots. Of course I am grateful! 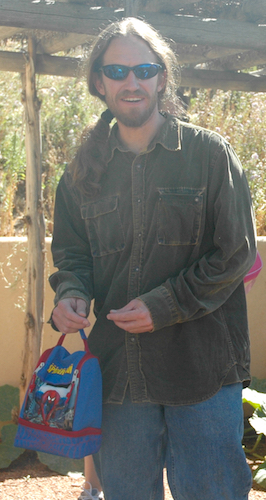