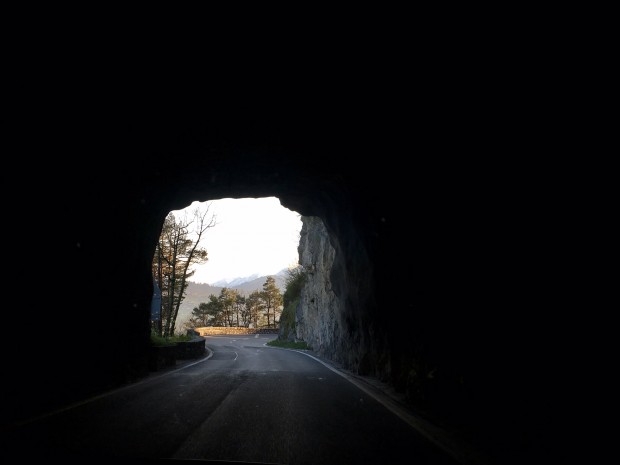 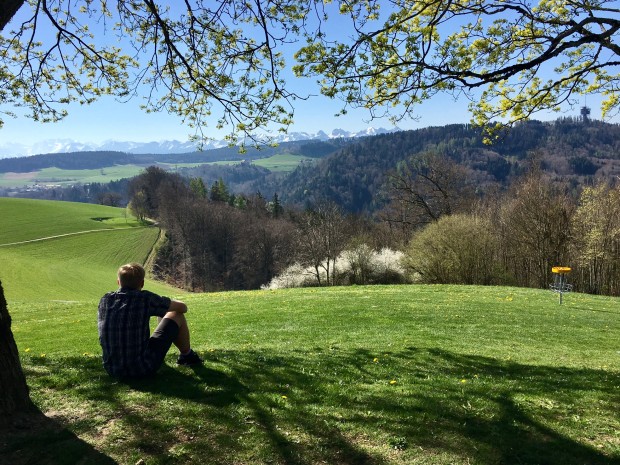 Kyle, Bern-Gurten Park, Bern, Switzerland with the Alps in the background

I had no idea. Sure, I kind of knew I was depressed. I just thought it was my typical Seasonal Affected Disorder. Winter grey is no fun every single year. As a result of my malaise, I was not correlating that the darkness I was feeling was because of my eyes. And because I am pretty farsighted, I figured my bad eyesight was a result of my inability to read tiny ingredient labels. And for some reason I attached my tiny label issue to my utter inability to read larger font restaurant menus. I gave up and Dave always pitched in. I neglected the constant blur in the center of my vision field and we adjusted. Still, I was not connecting that not being able to read up close had nothing to do with my world going dark. Again, I adjusted. I turned all my electronic screens to their brightest setting, read under very vibrant lights, and dealt with the daily fact that I literally could not see my left eyelid as I tried to apply mascara and eyeshadow (even with a magnifying mirror in the morning sun). Further, I did not think twice that my freckles were fading out of view.

“I am getting older and that is what happens.” 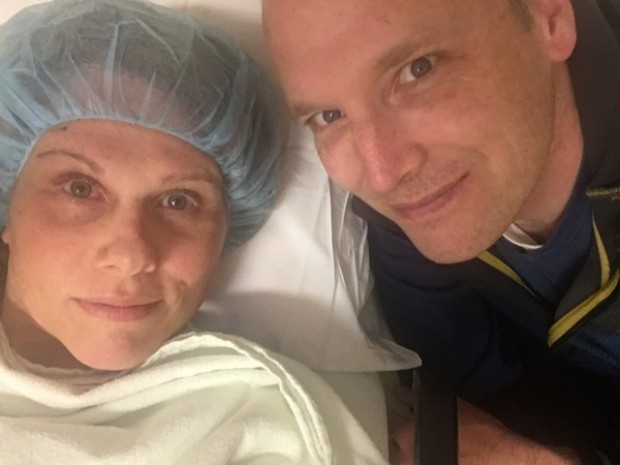 I also thought that the infamous Utah winter smog caused by temperature inversions is what caused the mountains and my background to blur, and it never occurred to me that writing was becoming a task and that images are not supposed to disappear when you look toward the light. It all seemed normal. In all truth, in spite of the profound loss of my once very clear vision, I had no idea I was going blind. 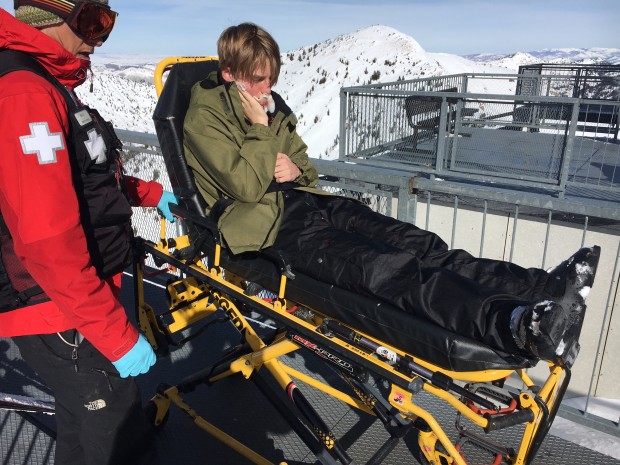 The only reason I did something is because we met our deductible. In January Eli had a horrible ski accident, which resulted in a seriously fractured jaw, which required a titanium plate, tooth extraction, and having his jaw wired shut. He could not chew food for two months and lost thirty-five pounds. With our deductible met, Dave suggested we see the doctor for anything we thought we might want to take care of. I knew I had not had my eyes tested in a while and the blur was a little bothersome. With risk of pre-existing conditions soon counting against me, I decided to get my eyes checked out. Mind blown. I have a traumatic cataract. And understandably, my diagnosis caused some confusion, especially with me. See, several years ago I thought it was strange when a cornea specialist said that I had cataracts, or better, said that he could see my cataracts. He suggested it would be a several years before I needed to address “them.” Herein lies the confusion. The specialist was expert in corneas, not cataracts. There is not a “them.” There is a,  “one.” And one blinding cataract may have a different diagnosis. In my case, it does. Still I was caught off guard, he explained my scans and explained my diagnosis. Still did not make sense.

Thankfully the surgeon realized that my processing speed needed a minute as I absorbed the shock. That is when he asked me to come back before surgery.

“Seriously. Look it up. Think of questions. Research. I can answer any of your concerns. And yes, the diagnosis is a classic traumatic cataract. Oh and by the way, when did you hit your head?” 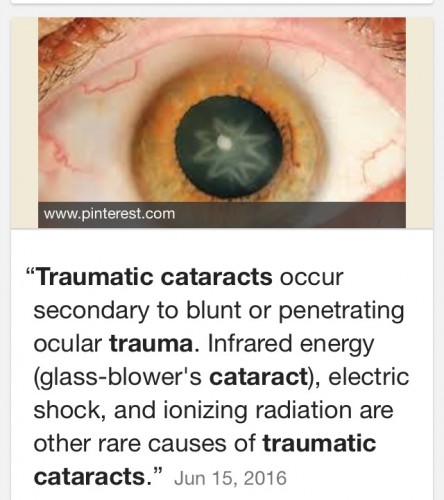 Information on Traumatic Cataract from Google

I did hit my head, and hard. Nearly ten years ago I went airborne and fell down my friend’s stairs. It was an unfamiliar house and completely dark. I went over a baby gate and landed on my face. I broke my nose, ruptured a cyst in my wrist, and damaged my optic nerve. In fact, even now the skin sensation on the left side of my forehead feels different than the right. And no, I was not drinking. Crazy! 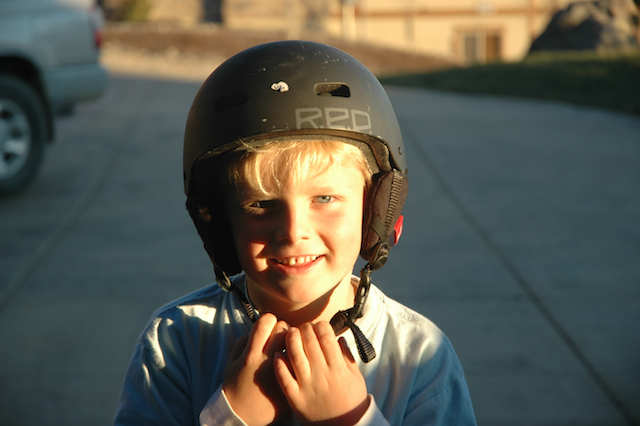 Easy E long boarding at the house where I broke my nose, Park City, Utah, November, 2007

You still may doubt or have questions. I did too. So before I go any further, let me clear some things up. Yes. It is true: everyone will eventually develop cataracts. If you’re reading this, you probably have them this very minute, and if you live long enough, you’ll probably need surgery to address them. Normal cataracts tend to affect both eyes. When vision is bad enough, surgery is performed on one eye and after that eye heals, surgery is performed on the other. My mom recently had cataract surgery and her mom, mom grandma, had cataract surgery too. And it is possible that one eye may need surgery a year or two before the other, but they are close. 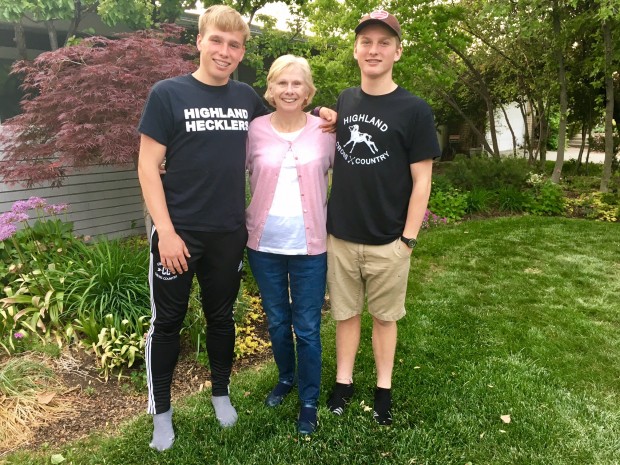 It is my understanding the cataracts are a natural product of the aging eye. My doctor put it this way:

“It is like every year someone puts a dropper of milk in a glass of water. Eventually the water becomes too foggy. And because the glass is yours, you get to decide when has become too foggy.”

Ultimately, it is our ability to see through foggy-water combined with the speed in which the fogginess impedes our vision that dictates when we are ready. As a result of these factors, not all of us will have surgery. We may die first (for real).

In my case, my left eye has a barely noticeable and typical cataract. It will probably be many years before it gets bad enough to fix. On the other hand, my right eye looked like a firework exploded in my lens. When given a glare test, I was completely blind. I would get my questions answered, yet surgery needed to happen regardless. Deep breath!

Even though it was confirmed that I could not see, I was crazy terrified the week before surgery. I was anxious. The risk of losing my eyesight altogether weighed heavily on me. I tried talking myself out of the surgery so many times, and I tried to cancel the day of. I convinced myself that I needed to be at the boys’ track meet. I even told the nurse,

“I should reschedule. They both run today. I do not want to be a bad mom.” 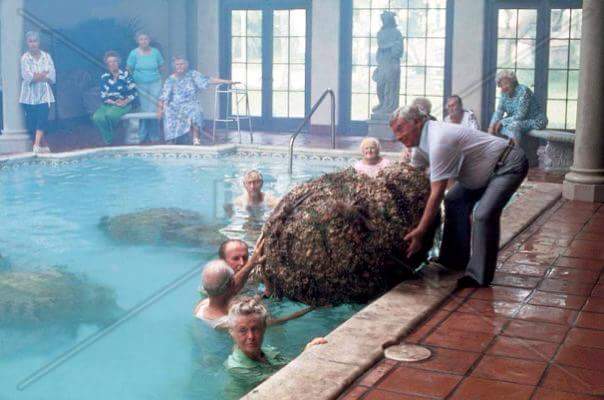 The nurse was kind and accommodating and told me that I had until 1PM to let them know. I waited until 12:50 PM to give them go ahead and I needed to be at the hospital by 2:15 PM. At that time, I walked onto the set of the 1980s movie, “Cocoon.” That is, I walked into the Moran Eye Center at the University of Utah. In a sea of delightful old people facing the same surgery, I waited. Because I barf 100 percent of the time after having morphine, the anesthesiologist opted not to give me pain medicine. Instead she used topical numbing and anti-nausea medicine. Of course they give you anti-anxiety medicine too, considering the fact that you’ll be awake while they poke your eye with sharp things. At approximately 3:30 PM MST, the surgeon began. He and the male nurse covered my head in a big white sheet with a hole. As the sticky parts around the eyehole adhered to my top lashes, I heard the doctor say,

“Let’s do this again. We don’t want to hurt those lashes.”

They lifted the sheet off of my face and repositioned the big white cover. Then they attached something to hold my eye open.

“How are you doing?” the doctor asked.

“I am good. This is so weird. Really weird.” I responded.

He cut into my right eye. I was awake. No. Really. I was awake for the entire surgery. And I remember it. About five minutes in, the doctor asked me,

“Beth, can you feel anything?”
“Yes.” I said and followed, “Is it supposed to hurt like this?”
“No.” he responded and then asked the anesthesiologist to give me more numbing medicine.

I could see colors. I heard the surgeon as he worked my busted cataract out of my eye.

“We are ready to put the new lens in.” the doctor said.

As he placed in my new lens it became stuck at the edge. “
“We need to fix this part. It is getting stuck on the edge.”

We were at minute ten. The doctor asked again, “Beth, can you feel that?”
As I looked at the bright whites, reds, blacks and blues reflected in the mirror above I said, “Really, is it still supposed to hurt?”
“No. It is not.” He responded and continued. “Please give her more medicine.” He instructed. 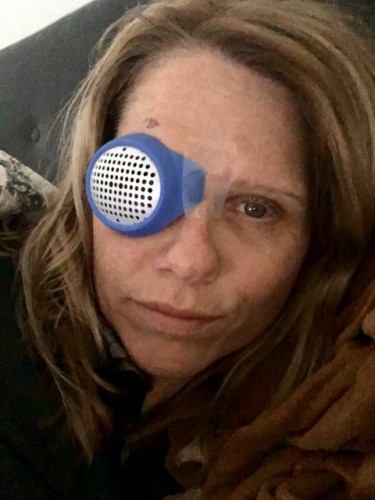 In twelve minutes my surgery was complete. The average time for cataract surgery is ten minutes. I’ll give the extra two minutes to the snag in my lens. When I came back for a follow-up the next day the doctor asked me about my experience. I asked him,

“Is it normal that I remember the surgery?”
“Yes.” He responded.
“Even all that pain.” I asked.

“The numbing medicine is supposed to last 15 – 20 minutes. Yours lasted five. Some people metabolize medicine really fast. You are one of those people.”

After surgery I was traumatized. I could remember the pain and remember the procedure. I could not get over the fact that I was awake while the doctor sliced into my eye. As a result of my processing overload, I asked Dave to drop me off at home so I could catch my breath. I assured him I would be ready to go to the boys’ track meet after he returned with my prescriptions. Yes, I was still trying to make the track meet. Three hours later I woke up. The track meet was over and the boys were on their way home. 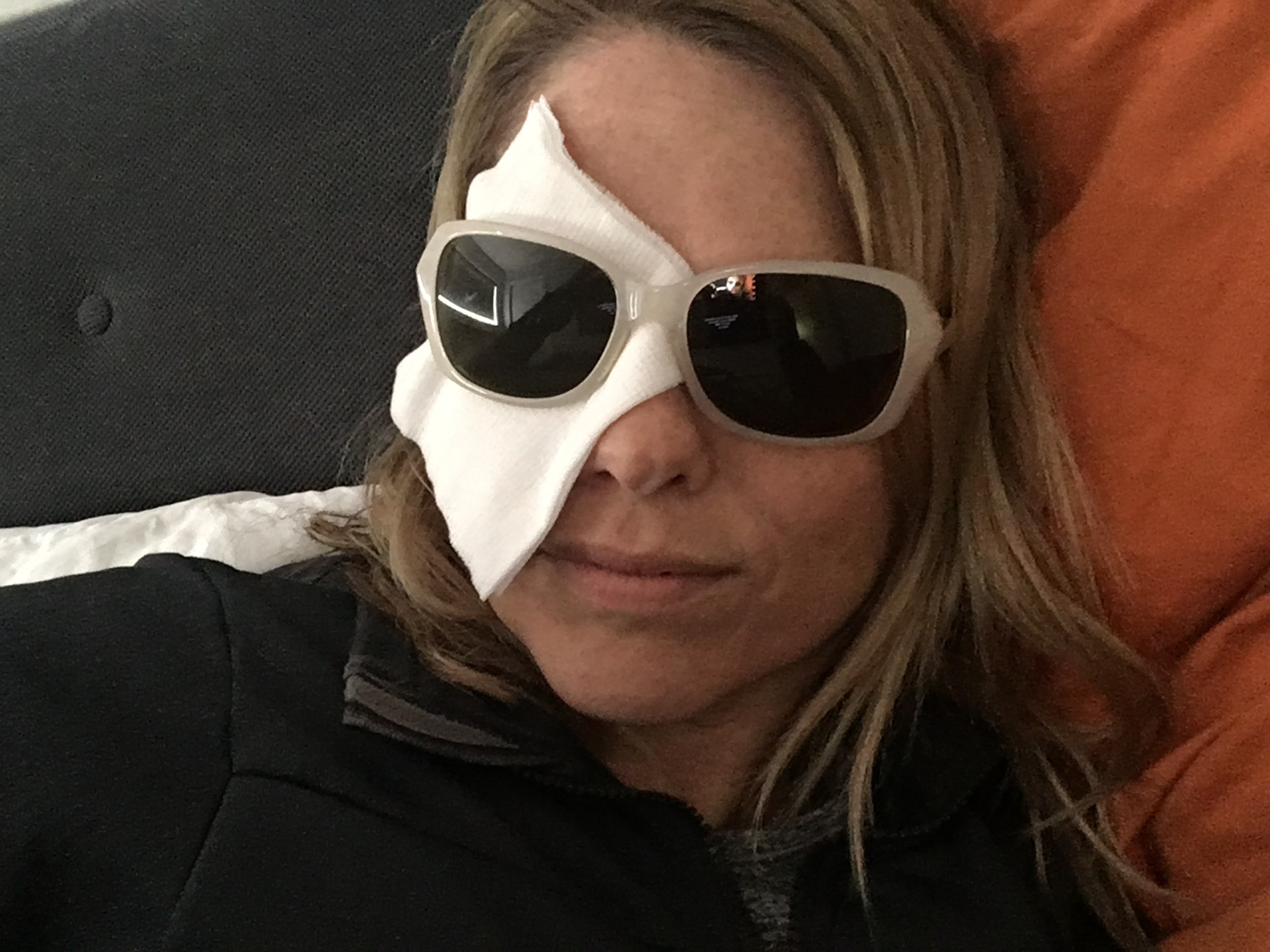 As I kept opening and closing my right eye, my blind spot was gone. My vision is crystal clear in my right eye and a bit duller in my left. The boys were back home. They were kind and grateful I was ok.

Before I left for my check up appointment the next day, after about half of the way in, I realized as I put on my eyeshadow that I could actually see my left eyelid. I looked closer and kept thinking about all the freckles on my face.

“Wow! I love my freckles. Man, I have a lot of them.” It honestly took me a few minutes to connect the dots as I thought to myself, “It is my new robot eye. It is allowing me to see. My freckles have always been this bright. Wow!” 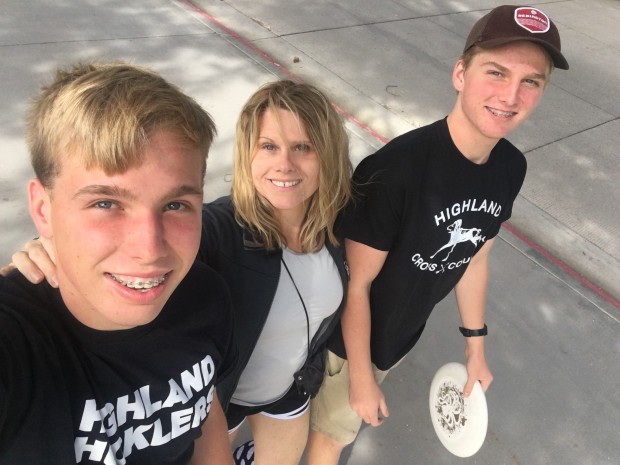 The boys and I on our Mothers Day Adventure, Liberty Park, Salt Lake City, Uta

Later that day Kyle and I went on a walk. I kept staring at the mountains to the east. I saw contrast. I saw peaks. I saw canyons. I have not seen the mountains like this in years. Then I saw the leaves on the trees. No longer were they a blend of greens. In high contrast I saw each leaf. From blur to high definition in twelve minutes, I still cannot believe it. By the way, I also noticed my bathroom is much dustier than I imagined and that I have a lot of wrinkles. Nevertheless, I am grateful.