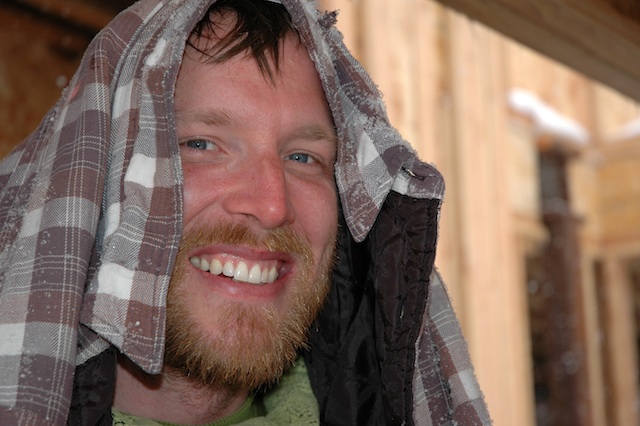 I think I was born with a perspective that has often been referred to as my “gift.” As I get older, I have learned that this so-called gift has also been a gigantic curse — a curse that has taken me years of therapy to wrap my head around.

You see, like many people, I have always had the ability to see the positive in any situation. Beyond seeing the positive, I would always manage to see that there was someone out there who was struggling more than me. On those rainy days and stormy moments, I was quite good at steamrolling myself through the chaos until I forced myself into the sunny side of life. If I felt sad, I could always see that someone was more sad, and, consequently, I could see how lucky I was not to be so sad. If I felt freaky because I had to wear a rust-colored, hand-made sweat suit, which was fashioned out of fabric my mom purchased at the clearance table, I could always see that there was the kid who wore the same pair of red Toughskins every single day of the week. If I felt mad at my dad for not wanting me, I would always say, “well, at least I know who my father is.” When I felt fat and ugly, I would say, “at least I have plenty of yummy food to eat.” When unexpected things happened, like our power being shut off (yet again), I would take a deep breath and think to myself about the millions of people in the world who do not have power to shut off! How lucky I was!

When my parents fought or my sister went all crazy on drugs or when I was made fun of for not only being a Mormon, but being the Mormon whose parents were divorced (this was the 1970’s: blended families were less common then), I was grateful that I had two new sisters, a new dad and a brand new church. (I started out Catholic.)

Slowly as I dismissed my own sorrow, I detached from the inadequate feelings I was burying inside my soul. When life became uncomfortable, I became a master of my positive attitude. When my positive attitude failed me, I learned how to make people laugh. When laughing wasn’t cutting it, I let just enough truth bubble up through my wickedly real sarcasm. My quick and biting tongue would allow me to blow off just enough steam to make it through another day.

Let’s be honest, I wasn’t a sincerely positive person as much as I was a master stuffer. My stuffing method of choice: Seeing the glass half full.

The only problem was when I was a young teen, I think I had stuffed as many feelings as my young body could hold. Not only had I experienced a ton of first-hand pain, I had watched my entire family suffer from some pretty horrific stuff. At times, when I was about to burst, I would try to articulate the painful truth, and then I would fear embarrassing or drawing unneeded attention to my family. Often I could not find the right words and often my truth was put on hold by one of my sisters, who most definitely had more pain to bare than myself (or that is what I told myseld).

Recently I was talking on the phone to one of my step-sisters. When she was a girl, among other very traumatic things, she suffered from terrible asthma. Asthma which was so bad that it would often make her bedridden and eventually she would have to be hospitalized. We were on the phone talking about my milk and dairy allergies when she said, “Well, it is too bad you developed allergies as an adult.” I told her that actually, I also had allergies as a kid, but mine weren’t that bad, because they didn’t hospitalize me. I wanted to be empathetic and let her know that I understood how much she suffered. (PS My allergies were horrific. I just didn’t have asthma back then).

When we hung up and I did some thinking, I remembered that my sister and I went for two years together and then I went for another year after she moved out, for weekly allergy shots. She got one shot and I got two. Of course, I was disappointed that she didn’t remember that. But you know what, I had forgotten too. Because her struggles seemed so grand to me, her younger sister, I think it didn’t occur to me to share with her back then that every single day from March through October my eyes  swelled shut, and both my eyes and nose ran like a faucet. The worst and most embarrassing part for me was sitting in class. I would take a few kleenexes into class with me. Once they were completely saturated, I would try with all my might to keep the snot in my head. I would hold my breath in hopes of stopping those awful drips. When I couldn’t see a thing and my face was soaked, I finally asked the teacher if I could get more tissue and because I wasn’t better prepared, she would make me wait until the end of class. As an adult, I wonder why I had to suffer so long before getting treatment. Was it because we were poorish? Perhaps. Was it because there were so many bigger fires to put out? Probably. Was it because I didn’t speak up? Kind of. I tried. My step-sister didn’t have any idea that I had allergies, because her own life was so uncomfortable and it was not her responsibility to know. She, like me, was just a kid. That I understand. As an adult, however, I finally realize that even if her pain and suffering was worse, I should have been helped too.

Lately, I have been in a state of no-feeling. Life is not bad. It is not great either. I have been definitely checking out. Sometimes its just easier that way. Yet today, I feel a little guilty about all of my fertility issues. So many people have struggled way more than I have. A few weeks ago, on our last attempt to try naturally, Dave and I had sex like eight billion times. We even had a big talk before I ovulated and like the trooper he is, he was totally on-board for our baby-making-sex-a-thon. There were days when he would leave work early, just to make sure we could fit sex in just in case. My favorite day was when my mom was over and I asked her if she could watch the kids so Dave and I could have sex before we took the boys to soccer practice. “Mom, I am ovulating.” She understood, but wished I could have left the sex part out.

We have  given it our all. Next month, we try I.U.I. and then I think we are done. It has been very hard for me not to slip back into a glass-half-full-stuffing-my-feelings-way-down-deep mode, especially today when I am getting cramps. I am guessing that once again, I am not pregnant. I see that I have these two awesome kids, but today I am also trying to allow myself to feel how sad I am.