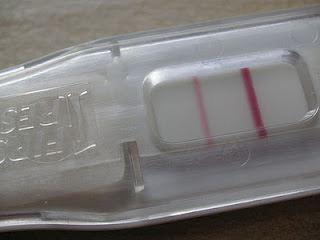 Where do I begin?

I guess it was about a month ago. I was headed over with a requested (by Carol’s husband, Chris) a home-made vegetable cake for Carol’s birthday. This day is significant because according to my typical cycle, it was perfect timing for my period to start. I had my usual awful cramps and thought nothing of them. I almost stayed home, but instead, took a bunch of Advil, sucked it up and went over to celebrate my friend’s big day. Now looking back, I am guessing that these cramps were probably Implantation Cramps. Ah-ha! 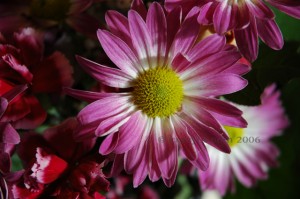 Obviously, my period never came. My cramps never really went away either.

Finally on May 20th, so Dave and I could get prepared for I.U.I., I decided to start taking Provera (to get my period started). As a precaution, before taking the Provera, I took a pregnancy test. (Provera would most certainly destroy a pregnancy). Now, keep in mind that my period has been late on several occasions. I have taken pregnancy tests before and they have always, always, always been negative. I didn’t think this time would be any different, especially considering the cramps, bloating and breast tenderness.

So on May 20th, as soon as I walked in the door, I ran to the bathroom, while Dave stayed outside with the boys. He had no idea what I was up to. I opened the package, reviewed the directions, and literally the second the pee hit the stick, I saw two bright pink lines.

[completely stunned] This can’t be happening. Is this a joke?

I walked to the entry way, asked Dave to come over, once he did, I showed him the pregnancy test. He smiled and kissed me (all good signs).

Honestly, and after trying for so long, I really could not believe my eyes. I still can’t. The next morning I called the doctor, who asked me to go in immediately so they could check my HCG and Progesterone levels. I also started taking Progesterone as a precaution and everything seemed good. And like the pregnancy clock my body appeared to be on, I began feeling really really sick.

The next day as Kyle, Eli and I sat in the theater waiting for Over the Hedge to begin, my cellphone rang. I left the boys with my friend and ran out of the theater. It was good news. My levels were good and the nurse told me to stop taking the Progesterone.

Then it happened. As pregnant as I felt the day before, the next day it all stopped — no more aching boobs, no more pukey feeling, just cramps, really bad cramps. I began to freak out and called the doctor. He recommended I come in for an ultrasound and go back on the Progesterone. He wanted to make sure I also knew that going back on Progesterone was no guarantee.

Kyle’s last day of school was June 1 and while he was having his last moments of kindergarten, Dave and I were at the doctor’s office waiting and waiting and waiting with all the other couples who were trying to conceive, for my ultrasound. The more we waited, the more I became unglued. I tried to focus on the People Magazine that I was reading and tried to care why Brad and Angelina are the most important parents ever. It wasn’t working. All I could see was how perfect and unreal Angelina looked. And then I wondered why every mom isn’t given all the free schwag that Angelina has been given. I mean, come on, a Moses Basket filled with over $3,000.00 worth of baby gear?

Forty-five minutes after our appointment was supposed to begin, they called us back.

Please take of your clothes from the waist down and cover yourself with this sheet. Have you emptied your bladder?

[his response -cheeky and light-hearted] Well, do you really think they need to design a special cover when we have all these condoms at our disposal?

As Dave and I stared at the screen, we saw the yolk sac and saw the tiny tiny embryo; all good news, or so we thought. The doctor desperately tried to find a heartbeat.

I see something, but it may just be all your blood vessels in your uterus. I just can’t be sure.

According to my dates, we should have been able to see a heartbeat.

And this is why I like my Reproductive Endocrinologist: He could see our despair and immediately asked us to wait for a minute. He ran to his office and grabbed a chart. He came back and asked me if I was sure that I ovulated on April 30th. He calculated and recalculated my dates and a bunch of probabilities.

Well look here. Between these days there is an incredible amount of growth. Even if your dates are off by four days, we may not be able to see the heartbeat yet. I hate do this to you, but I want you to wait a week so we can be absolutely sure. If the embryo is not viable, it won’t hurt you to have it in you for one more week . . . You are a really brave woman. I can’t imagine what this is like.

I reminded him about all the brave women in the waiting room and he kindly reminded me how me personally had been through a lot.

Dave and I left the office and joined Kyle and Eli at Kyle’s class picnic. The day before, Eli had announced to one of the Kindergarten moms that he was going to have a little brother or sister so when we arrived at the picnic, we had to fill everyone in. What a supportive bunch.

Somehow, someway, I made it another week. This time we only had to wait a half an hour for the doctor. The waiting room was not as crowded. I only saw one couple, where the man was holding this gigantic sperm-collecting take-home unit. It looked like a high-tech thermos. That was enough comic relief to get my mind off the news I was waiting for. The week before the doctor answered my direct inquisition by telling me that if the embryo was not viable, we would have the option of a D&C. In this case, because I had not bled at all, D&C was the preferred method of removal. I had convinced myself that we were there for a D&C.

They called us back. I emptied my bladder, remembering that even though I had emptied my bladder three times while waiting the week before, that it had filled up by the time I had my ultrasound. I am such a nervous bladder filler. We were more relaxed this time and literally the second the doctor inserted the vaginal ultra-sound device, he and Dave saw a heartbeat.

You really saw a heartbeat?

they both answered me.

See. Look. It is right there.

I couldn’t believe it, a little clump of cells with a little beating heart. WOW!

Now, I don’t want to be a complete buzz-kill, but the doctor reminded us that we weren’t out of the woods, because of what he had been doing for that previous five minutes: He had been measuring the embryo at least eight or nine times.

It is really small.

he told us, but the sac and the embryo had grown from the week before and there was definitely a heartbeat.

He asked us to come in for another ultrasound and we all agreed to keep our fingers crossed. This week I am more nervous than last. Last week I felt super pukey every single day. This week I don’t feel very sick. Of course I am freaked out again. I think I will be freaked out at least until the next ultrasound, July 5 (The doctor will be out of town so we decided to wait until he gets back). We also agreed that if I do miscarry, we have done everything we can.

Yesterday we took the boys on a bike ride. Kyle cut in front of me, so I had to twist my bike and my body and stop really fast. Doing that crazy stopping motion, I pulled my hoo-ha muscle (for a lack of a better term). Today I am a little uncomfortable and have to keep reminding myself that the baby is fine, that I just had a hoo-ha accident.

Thank you all for your well wishes. Hopefully, everything is ok. I only wish I was more confident that it will be. Dave told me that I need to practice the power of positive thinking.

So, have any of you had morning sickness that comes and goes?