with a little Mormon who-do-you-know 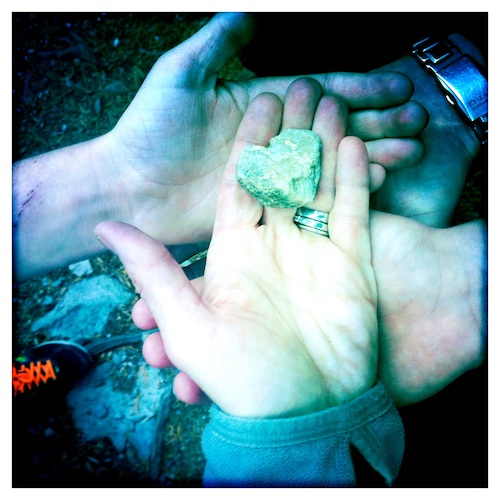 Heading west, we are leaving Great Basin National Park. I see the reflected sunset blend pinks, blues and purples across the mountains. I wish I could capture what I see. These mountains’ die cut shapes are now printed in my mind.

We are literally yards away from the little town of Baker, NV, population, 385. Of course Dave and the boys are once again listening to Brandon Mull’s “The Beyonders.” It is never lost on me, because my boys tell me so, that Brandon Mull is a friend of Uncle Denny’s. I think it is hilarious how the Mormon Church and consequently living in the state of Utah, we end up playing our very own game of Six Degrees of Separation. In the Mormon Church, especially here in Utah, however, you are never separated by more than one degree. Because of this Utah-and-Utah-Mormon-phenomenon, it is no shock that I am also friends with one of Senator Harry Reid’s sons, or that the now famous author of Book of Mormon Girl, and outspoken Mormon Scholar, Joanna Brooks, is a good friend of mine; so is her lovely sister, MB. If you knew how closely connected the Utah-based Mormon culture is or is it was, you would understand that it is commonplace that I am (no joke) one degree away from the Mormon Mommy Blogger who was horrifically burned in a plane crash, and found the strength to rise above, Nie Nie, although we have never met. Everyone I know has or is somehow related to her or at least that is what they tell me. I promise you that a good friend of mine, a friend who also dated my brother, is very good friends with the Twilight Lady. So when my friend Robin introduced me to the lovely and talented Carrie way back when, within a millisecond I knew I had hit paydirt. Then and literally my eleven-year-old-girl heart skipped two beats as I learned Carrie’s Dad is like the most FAMOUS MORMON EVER! If you were both LDS and alive in the late 1970’s through mid 1980’s you knew the uber popular Mormon Musical, and now parodied, Saturday’s Warrior, a musical in short based on the Plan of Salvation through song. And if you know Saturday’s Warrior, you also know that Mr. Lex De Azevedo is the musical’s great producer and co-writer. Ok and yes, it is very cool that Lex De Azevedo was also the musical director for the Sonny and Cher show, The Jackson Five and The Osmonds, but as a young Latter Day Saint living in the heartland, Saturday’s Warrior was EVERYTHING! No. Seriously! EVERYTHING! Ok. Don’t mock, but listening to the soundtrack on my little tape recorder and belting, “Line upon Line. Precept upon precept. That is how he lifts us. That is how [insert dramatic pause here] he teaches his children…” I was transported. I was full of hope. I was one of those stars in the sky. And back in say, 1982, every congregation put on their own production of Saturday’s Warrior. I make no excuse for the fact that I wanted to rip perfect little Tana Call’s vocal chords out when she got the part of Julie, female lead. Saturday’s Warrior, like it or not, was the soundtrack of my Mormon youth. So the fact that my friend Carrie is also related for you older folks, the King Sisters (her Grandma), and to you Indy-Rock-Hippies, Arcade Fire (her cousins) really makes Carrie the Holy Grail of what-Famous-Mormon-do-you-know. Thankfully Carrie is as normal as any person who grew up LDS can be [wink wink]. Might I add, for eleven-year-old me, knowing Carrie would have honestly been better than seeing those Golden Plates for myself, taking photos and stashing a plate or too in my safety deposit box. And yes, I have told her so.

On and on the silly connections go. Oh wait, and speaking loosely of the Osmonds, because they really are the Kevin Bacon of this Mormon game, my favorite secret connection of all time is that my very good friend Eric’s sister is married to Jimmy Osmond — so awesome! (Sorry for outing you Eric.)

I promise you if they were or have ever been a Mormon and you were or ever have been a Mormon, you would know them or be just as connected to them too. Alan introduced me to (love him or hate him) Orrin Hatch and Orrin claimed to even know my website. I, to this day, am sure he was prepped. And yes, everyone I know knows Mitt Romney or went to BYU with his sons. Years ago I saw him at church. He was playing with one of his grandchildren in the back. He stood right next to me while I chased Kyle around the gym. And in fairness I have seen Donny Osmond twice, once at church in Minnesota, the Wayzata Chapel, to be exact, and once at the Orem Costco, where he held the back gate open for us so we could sneak in.

I digress. Wow. I really digress. 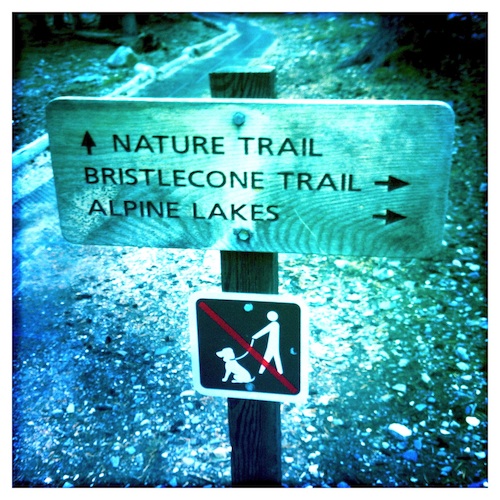 As the boys listen to The Beyonders, I am wearing my headphones to block out the story’s narration. My iPod is on full volume, I do not like the song playing, and fast forward to Radiohead’s, “Creep,” the acoustic version. Is there a better road trip song? If only I could scream the words out loud? “I am a creep…what the hell am I doing here? I don’t belong here…you’re so very special. I wish I was special. Whoa, whoa. She’s running out. She run. run. Runnnnnnnuuuunnn.” 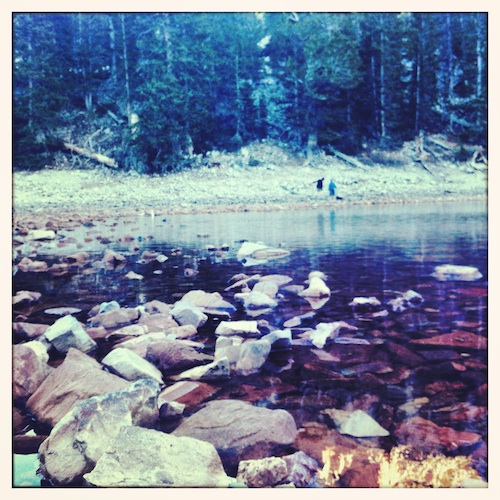 Dave and I are trying to decide if we should stay for the night. We’re pulling over. I have no idea what the little grocery store/bar/restaurant/ice-cream-shop is called. Great Basin National Park, home of the Bristlecone Pine (the world’s oldest tree), is the least visited national park for a few simple reasons. It is on the western middle-of-the-desert-middle-of-nowhere border between Utah and Nevada. Great Basin is hard to get to, is not on any major highways or byways, and is not at all close to anything else. Years ago since learning she was there (yes, Great Basin is a she), I have always felt a kinship to this stunning and forgotten place. We drove through Great Basin in our camper van many years ago. Eli was a baby and the night we camped was stark, cold and I was convinced that the only other camper chose to camp right next to us because he was a serial killer. If I closed my eyes, even for the split-est of seconds, he would most certainly get us. I asked Dave to lock everything up and sleep on the bottom section that night. My guess all these years later and maybe because the boys are old enough to protect me, is he simply did not want to feel so alone. Because the Bristlecone-Pine area was closed for the winter when we were here before, Dave has always wanted to come back.

Stopped on the side of the road, we were in Baker, NV, which is a “blink once” and you’ll miss it little town. We drove to the other side of the street, parked, walked up the stairs, into the restaurant and agreed that the boys could have ice cream shakes. Our tall waiter, with blue jeans he wore just a few inches above his waist and the only waiter, by the way, directed us to take a menu and a seat. Here we sat in this eccentrically delightful restaurant colored in bright reds, yellows, and filled to the brim with art, framed, crazy sculptures hanging above us, displayed in the bathroom, and all with affixed price tags.

The restaurant is the size of a Starbucks bathroom and oddly enough they were using various Starbucks flavored syrups for the Italian Sodas. We looked over the menu while Eli looked around. “Hey Mom, our waiter looks just like Bill Nye the Science Guy,” Eli said and we all agreed. 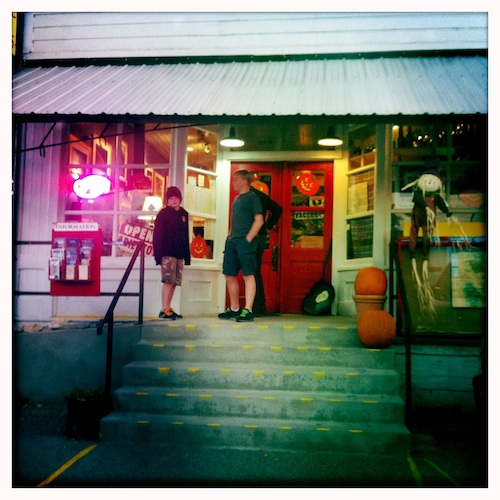 Outside the restaurant in Baker, NV

There was no caramel for the shakes, and then our waiter kindly suggested,
“I like it when he mixes flavors.” “Do you think we can mix ours’?” the boys both asked him. “I’m sure you can,” he said in the mellow warn-out voice of an outgrown hippie, who may or may not have moved to tiny and remote Baker, NV to follow his dreams.

Dave decided on an enormous ice cream with homemade cookie sandwich.
Me, well, I had some green tea. I was cold. 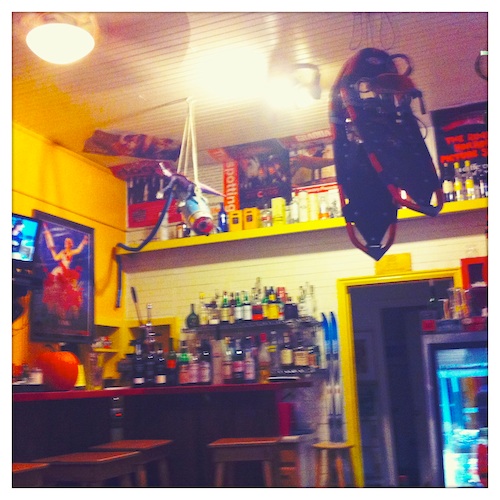 Inside the Baker, NV restaurant

Our day began in Tonopah, NV. Have you ever been in sweet travel slumber only to be assaulted by the unfamiliar repetitive beeps of an obnoxious hotel alarm clock? Happened to us. I swear it was 5:30 a.m. Dave, who was wearing his watch, assures me it was 6:00 a.m. I was the closest to those piercing beeps. Unable to ignore them I started swatting at the nightstand. Imagine my arm completely outstretched hitting fervently into the darkness. That’s what I did. Later on the kids even said while pointing at that mean hotel clock, “Mom, what did you do to that alarm clock?” Thankfully the sleep-induced damage was nothing and I was able to set the clock upright and snap the iPod dock thingy back in. Yay!

Exactly nine minutes later I heard it again. Beep. Beep. Beep. “Damn it! I only hit snooze.” Swatting at it again I could not make that ugly and unfamiliar sound stop. Pleading, I asked, “Dave, please. I cannot see. Please read the buttons and make it stop!” I may have handed him the alarm clock. I honestly do not know. Dave fixed it and we fell asleep that is until I heard the familiar sounds of my own alarm. I allowed myself two snoozes. And after yesterday’s falling-down-the-rabbit-hole day, I wanted us up and out the door.

We stopped at Giggles, yes, of course the gas station. Gas was down to $4.19 a gallon. We filled up, and were on our way.