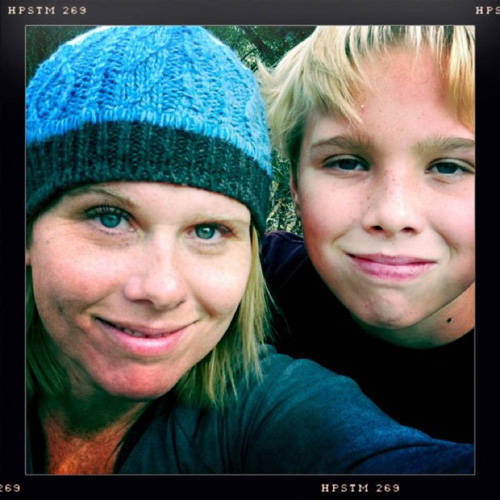 Simultaneously numb and completely in shock. That is how I have been and continue to be. Slowly I am coming back. We are all coming back. On February 6, 2011 I wrote the following:

Seeing Kyle’s fingernails and toenails peel off layer by layer until they reach the underlying skin from the nail bed up is what knocked some life back into me. The realization that something so seemingly minor, something we did not even notice until today, eight weeks after Kyle was first admitted to the hospital, woke me up. The weight is heavy. His fingernails look so gross and so painful. When I first looked at them I thought they were bloody because he had been picking the scabs out of his damaged nose. I was wrong. These ten fingernails and ten toenails were destroyed and slipped by unnoticed, unnoticed until now.

Before this all happened, if I were simply dealing with Kyle’s freakishly peeling fingernails, I would have completely lost my mind. Now peeling in such a horrific way, I didn’t even notice.

“It could have been worse.” It just keeps on coming.

The physical, emotional and psychological pain I have watched Kyle endure this past year as a result of Stevens-Johnson Syndrome is pain I could not have imagined. The utter despair Dave and I felt as we watched all the doctors try to figure out what was going on was so frustrating that initially I quietly unplugged my emotions. I had to. I had to get us through each day. I had to be there for my family. Kyle was breaking right before our eyes and we were all completely terrified. Kyle’s agony kept me silent. I kept my tears quiet. I kept my despair out of his hospital room. When others broke down, I asked them to stop.

“You are scaring him. And he does not need to be scared.”

The week before I took Kyle into the pediatrician he was home with a cold. 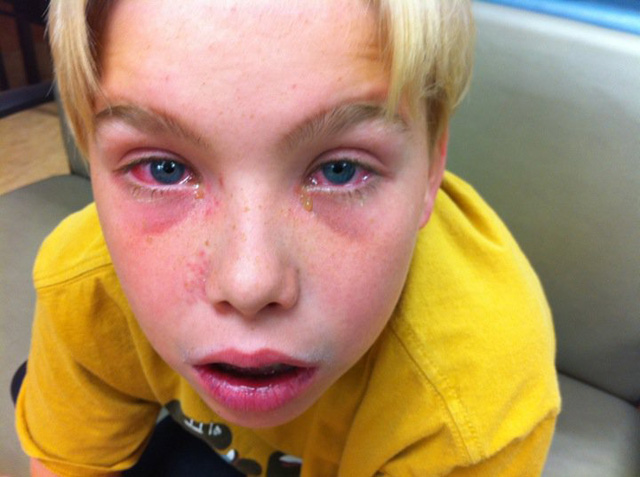 On Tuesday, October 19, 2010, Kyle came home from school and said he was not feeling well. He sat on the couch and almost immediately fell asleep. Eli’s Parent Teacher Conference was at 4:00. Dave came home from work to attend the conference too. The three of us left while Kyle remained asleep on the couch. When we returned an hour later, Kyle was still asleep. Kyle never takes naps. He felt warm and sounded like he was getting Croup. Because he has a long history with Croup and the Croup getting really bad really fast, I decided I should take him into a doctor. Usually I would take him to his regular Salt Lake City Pediatrician, but because it was almost 6PM, the SLC Pediatrician’s office was closed and I did not want to end up in the ER. Kyle did not need to suffer. I called the local Pediatrician. Even though he was a new patient, she was happy to see Kyle.

By the time we arrived at the doctor’s office, Kyle was much worse. His fever was 102, he could not catch his breath, he was so pale and was totally freaked out. His throat hurt. His voice was hoarse and he sounded like a very sad baby seal.

The doctor thought he had Croup too. She tried to give Kyle a breathing treatment, which after a few seconds he refused. Then she gave him Oral Steroids and 600 MG of Ibuprofen. She prescribed two different types of inhalers and sent us on our way. I took him home. Then Dave drove over to the Pharmacy to fill Kyle’s prescriptions. Once Dave was home, we gave Kyle his medicine and put him to bed. During the night we closely monitored him. Kyle did our usual Croup-at-home remedy, which consisted of taking a long hot shower and then standing outside in the cold. Kyle still felt lousy the next morning and stayed home from school. By the afternoon he was feeling much better. By Friday, when my mom was with him, he seemed even better, yet his intense cough lingered.

By Sunday Night, October 24, Kyle began complaining about how his eyes felt like they had sandpaper in them. Then after his shower the next morning he complained about how his eyes had been glued together. Because he had already washed them outI did see his glue-y eyes. My motherly logic dictated that he was probably getting Pink Eye. Again, because I had not seen Kyle’s eyes glued shut, I wasn’t quite sure and even considered allergies. Sure, his eyes were red, but I thought he would be fine. Additionally, Kyle hates missing school. Because he had already been sick so, instead of keeping him home, I washed out his eyes and sent him on his way.

That same day, Eli was gone on a play-date.  At 3:05 PM I arrived at after-school-pick-up to get Kyle. The very first words out of his mouth, and while he was fervently pointing at his eyes, were,

“Mom, my eyes really hurt! They sting! I cannot stand it! They burn!”

I felt guilty for sending him to school and could tell things were much worse. I immediately asked if he wanted to go to the doctor half expecting him to say no. Emphatically he answered,

Because we had seen the Park City Pediatricians for Kyle’s initial Croup diagnosis, I called them again and scheduled another appointment. When we arrived, the office staff said the doctor was forty minutes behind. Because we live so close, I told them we would go home and then come back. In those short forty minutes and on our way back to the Doctor’s office, Kyle suddenly freaked out and blurted,

“Mom, I think I burnt my tongue from my hot cocoa! I can hardly open my mouth.”

Because we were going back to the doctor I asked if I could have the doctor look at his tongue too. “Yes! Yes! Please! It hurts. I don’t think I can open my mouth.”

By the time we arrived back to our appointment, Kyle could barely handle the eye pain. Oozy green stuff was dripping continuously from his eyes and down his face. He looked like he had pink eye on steroids. His face and lips were beginning to swell. The doctor took his temperature and it was normal. She said she thought he was suffering from a really bad sinus infection, a sinus infection that had moved from his eyes to his tear ducts. Huh? Honestly, even then, I did not think she really had any idea what was going on. She took a big guess and threw some antibiotics at the situation. I am told that usually big guesses work. Then she looked at his tongue and said it was not ripped. What she did see were  three big sores underneath Kyle’s tongue. She attributed them to the sinus infection. She prescribed 2,000 MG of Augmentin twice daily and we were on our way. 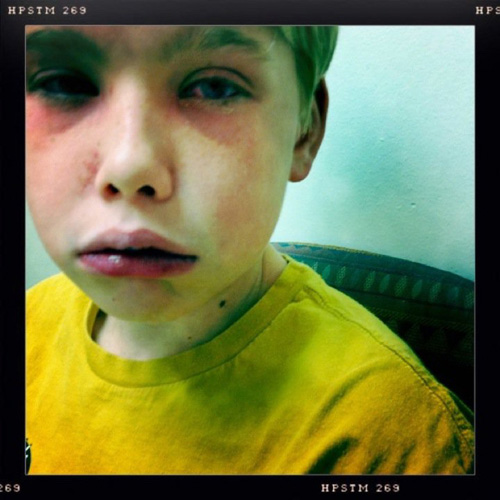 Kyle stayed home the next day. However, because my neighbor had planned a wonderful pumpkin carving party and because Kyle seemed better after resting all day, we let him go. Kyle, Eli and I went to the neighbors while Dave, who was also getting sick and who was leaving early the next morning for a business trip, slept. As the night progressed Kyle’s eyes and face became even more swollen. His lips looked as if a bad Plastic Surgeon over-injected him with Collagen. The other mothers, who I do not know well, noticed Kyle’s face, talked amongst themselves, worked each other into a frenzy and then mentioned things like Cellulitis, the dangers of terrible eye infections and of course, death. I was completely spooked! The women continued to insist that I rush Kyle to the ER. Regardless of what was really going on, somewhere deep inside of me I had a feeling that something very serious was wrong. I just did not know what. 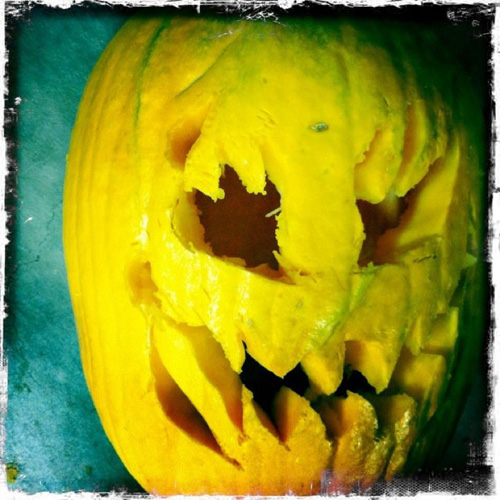 My neighbor graciously offered to keep Eli and because I knew Dave was not feeling well and also leaving for a business trip the next morning, I accepted. I took Kyle home. Instead of racing to the Emergency Room, I paged the pediatrician and then called my friend, who is also my doctor. After talking to my them, after weighing the history of the situation and listening to how Kyle’s cough sounded, they both encouraged me to take him to the Emergency Room at Primary Children’s Medical Center. The Pediatrician told me to prepare and pace myself in case they keep Kyle over night. She thought they would put him in the Quick Treatment Care Facility and give him IV Antibiotics to push the infection out of his system. I packed a bag for Kyle and gathered his favorite Blanky Car (Blanket) and Bully (stuffed animal). We were on our way driving down Parley’s Canyon in the very first big snowstorm of the season.

Part 1: Seriously? Where do I begin? Stevens-Johnson Syndrome I shake my Fists at You!