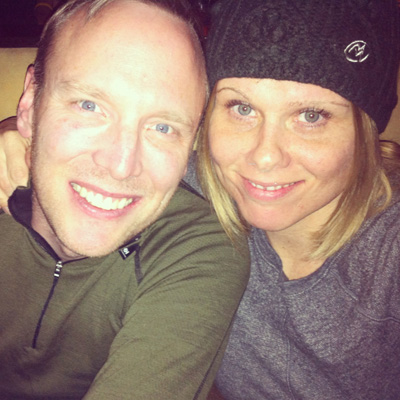 Dave & I at dinner with our lovely friends

After spending a long and most delightful weekend with dear old friends I knew I would be able to handle the very late weekend nights because I would have this Monday morning to catch up on lost sleep. I was giddy with the thought that as soon as my family was out the door, I could go right back to sleep. Decadence!  I kissed Dave, Kyle and Eli good-bye, told them that I loved them and they were on their way. I quickly ate my oatmeal, drank my green tea, sent an email to my fellow room-mom/pal about our upcoming Valentine’s Day Class Party, emptied my bladder and climbed back in bed.

Snuggly and warm I was as I drifted off into my daylight slumber.  Through my sleepy, sleepy haze I heard the buzz buzz buzz of my phone vibrating across my night stand. I thought about ignoring it and then I worried that maybe Dave was having an emergency. It had to be Dave because  I knew the school would not text me. I picked up my phone and looked at my text. It was my good friend.  She wanted to know if I would accompany her on a Salt Lake City Target run. Yes, we have to go to Salt Lake City because Park City is way to lame to have its very own Target. They would rather we risk life and limb driving down Parley’s Canyon than accomodate the locals and tourists alike. And no, The Park City Walmart does not suffice.

I asked her to go without me and turned over.  Then, because she is a very good friend and because I am easily swayed when it comes to a Target run, I texted her again.  She told me she was having a rough morning.  I had a feeling.

“I will pick you up in a half an hour.” She replied and shortly thereafter we were out the door.

She Auto-piloted us over to the Kimball Junction Starbucks where yes, everyone does know my name. All I need to do is stand in line and even with other customers in front of me, the barista makes my venti green tea unsweetened no water. I love it! All the other workers say, “Hello Beth,” I put in my two, not one, raw sugars and we are on our way. 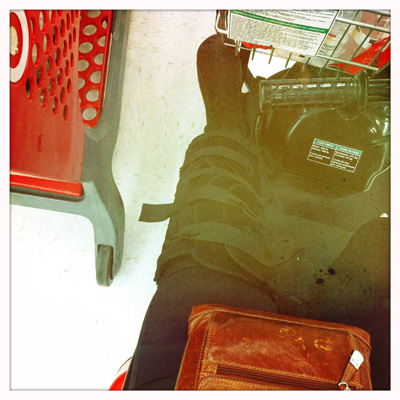 Target Scooter when I injured my knee

I could spent the next month or months expressing my great fondness for Target. I could tell you quips and sweet anecdotes about how my older sister Brenda had her baby picture taken at the very first Target store ever. I could tell you how the Knollwood Target in St. Louis Park, MN was the Target I shopped at until they built the Ridgedale Target. I could even tell you how happy I was when the Knollwood Target, that we came to refer to as Tar-ghetto, was finally remodeled in 2005-ish and that I was one of its very first shoppers when Target re-opended its doors in 2006. Oh, I could tell you a lot about my friend Target. Alas, this is not about Target. My Target Love will have to wait for another day. 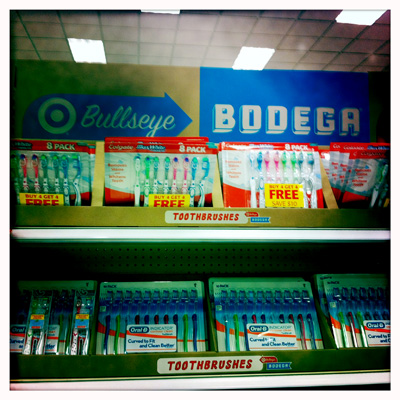 We shopped. I bought more than I needed. We discovered the Bullseye Bodega where I almost purchased ten new soft toothbrushes. I resisted. My friend said something about the Bodega being “Mexican Walmart nice with US Walmart prices.”  I nearly wet my pants as we tried on clearance scarves. Yes, I must say she looked like Princess Amidala and it was awesome. She made me resist the 70’s style brown and orange scarf and frankly, I am still a little bitter. She picked the slow line and I should have known it. Of course I recognized the super slow, not-of-this-earth cashier after my friend had unloaded her goods on the conveyer. Damn! I flew through my line, took some allergy medicine and waited. While waiting I realized how extremely hungry I was and when she finally (like thirty minutes later) made it through her very slow line I asked if she would be up for lunch.

We headed over to Pei-Wei and  because french fries sounded better, we detoured right over to Chick-fil-A. As we sat devouring our waffle fries, chicken nuggets and chicken strips, one by one they came.  The Mormon Missionaries were on lunch break and the acid flashback began. My friend is not LDS (Mormon) and every time I explain what things mean I swear she says something like, “What?  Visiting Teacher? What? You  mean they have to come to your house every month and what? Do you know them? What are you supposed to tell them? What?”

And at lunch I think I may have shocked her with this little bit of trivia. “I feel so sorry for these guys. You know this is where I was on my mission. Yes, right here in Salt Lake City. Crazy.”

She responded with a, “I think it would be better here.”

“No! Oh no it is not. It is not better. You see people you know. Your friends get to go home and do things like watch television. You get to stay and be a missionary. It is hard. I think I would have preferred going to another country where I could have totally disconnected from all things familiar.” I thought to myself, ” Oh and then there is whole  part  about me having a hard time with authority.”

Because we do live in Utah my friend knows enough about Mormon culture to know who the missionaries are and all about their strict lifestyle.   Then like cops meeting at a doughnut  shop, the missionaries kept coming and coming.  I was a little freaked out. I remembered when I was a missionary, they would do the same thing.  I don’t know if they were where they were supposed to be and I really do not care. I knew they needed each other. They needed a place where they would not feel so alone. I remember when I was in the same space and I remember I craved the same thing. The more missionaries that sat down next to us, the more I realized how much I was censoring myself.  If we stayed any longer I am sure I would have started singing church hymns. My friend and I laughed. We whispered. We watched and then talked about every word that left our lips. Thank God she finally said it. She finally said something that would not burn their ears. We laughed.  And as we sat by the Mormon missionaries we talked about all the things you say when you are not trying to swear.  “My mom’s favorite’s were Oh fudgesicles and Oh Christmas trees!” I told her.

“Oh fartwhistle Brown!” Thank you Urban Dictionary and thank you dude who told my friend about the Farty, (a party where you just sit around and fart).

Sophomoric? Absolutely!  I was sitting in the very town where I was once a Mormon Missionary and in that moment,  I also felt compelled to follow the rules. So weird.  Thank you to my friend for sensing my discomfort  because in the very next moment she opened her mouth with a, “Oh Fartwhistle Brown,”  which made everything seem right.

With every single waffle fry devoured,  my acid flashback was over (Thank God) and we were done. Out of missionary earshot, we walked in the bathroom and before the door shut behind me  I  could not hold it in any longer and I said, “dammit.”